"Anti-Jacobite" wine glasses, after the Battle of Culloden

Inga Walton wrote very well about the National Gallery of Victoria exhibition called Kings Over The Water (2013). Although religion played a significant role in the propaganda surrounding the overthrow of King James II, it was not necessarily an overriding factor in the Jacobite movement. A large proportion of Jacobite supporters were Protestants and members of the Tory party! Others were partisans in the cause of Irish & Scottish nationalism. Both groups supported the claims of an indigenous Stuart dynasty over those of a foreign German house, as the Hanoverians were described. And they opposed the subordination of the monarchy to the will of a small group of powerful and self-interested, English land-owning aristocratic Whigs in parliament.

This momentous political and military struggle continued after the death of King James II with the Stuart supporters declaring James Francis Edward to be James III. I have written at length noting that to explicitly support the Stuart claim would have been treasonous. So popular songs and works of art bearing the likenesses, mottos and emblems of the exiled dynasty became a more subtle weapon in the battle to win the public over to The Cause.

Jacobite material culture, including medals, portraits, ceramics, prints and glassware had to use coded symbols to express loyalty and solidarity. By far the most common symbol was the six-petalled white heraldic rose, an ancient emblem of the Stuarts. And the thistle, representing the Stuarts’ claim to the Scottish throne; the thistle surmounted by a crown was an ancient badge of Scotland. The oak leaf and the acorn also held great significance, since the oak was an ancient Stuart badge and an emblem of the Stuart Restoration. Stuart supporters relied on the ambiguity of these fashionable motifs to obscure their real intent. 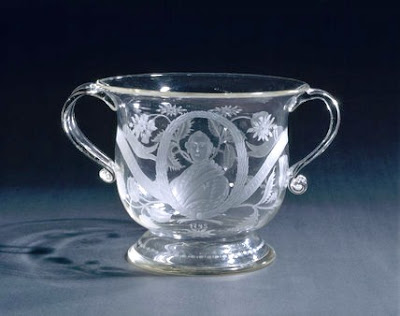 Pro-Jacobite glass with two handles, 1745,
in the Drawing Room at Trerice in Cornwall

120 small private clubs, gatherings of Stuart sympathisers, were the focal points of Jacobitism in the mid-C18th. A number of Masonic lodges were known to be Jacobite, as were many hunts, part­ic­ularly if they were maintained by an aristocratic patron sympathetic to The Cause.

Owing to the covert nature of Jacobite allegiance, it was initially assumed that these vessels were produced in secret in the provinces. However the vast majority of authentic Jacobite glasses were wheel-engraved! This was a relatively new decorative technique in England in the 1740s, a skill confined to the major London glass workshops. Only five engravers have been identified.

The Jacobite struggle reached its peak in 1745 when King James II’s grandson, Charles Edward Louis/The Young Pretender (1720-88) led an armed invasion, the last pitched battle fought on British soil. The buoyant mood of Stuart supporters and hopes for the restoration were soundly quashed at the bloody Battle of Culloden in 1746. This earned Bonnie Prince Charlie’s opponent on the field, Prince William Augustus, the nickname "Butcher Cumberland".

After Bonnie Prince Charlie spent some months in 1746 wandering in the northwest Highlands and Islands of Scotland hiding from British forces, he finally sailed to permanent exile on the continent. In the battle’s punitive aftermath, active suppression of the Highland clans led to measures such as bans on the wearing of tartan and on other aspects of Gaelic culture. These events continued to arouse strong nationalist feelings, then and now.

Jacobitism, as a living political cause, ended. Nonetheless, the doomed political and military adventure that was the failed Stuart bid to recapture the English throne assumed a potent afterlife in romantic literature and art. 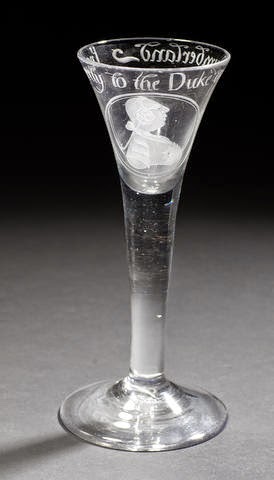 
But here is something I had previously not heard of! The NGV exhibition concluded with an acknowledgement of the dynastic status quo: anti-Jacobite glasses with emblems expressing loyalty to the Hanoverian monarchs. Most common of these was the prancing white steed of Saxony, an emblem of the German House of Hanover, often accompanied by the motto ‘George and Liberty’, celebrating the new political settlement.

How extraordinary! The Jacobites had to be secretive because to support the Stuart claim would have been treasonous. But why did supporters of the royal family and of Parliament need symbols on their wine glasses? And why did the loyal wine glasses often include a portrait of the Duke of Cumberland (1721-1765)?

In presenting an engraved Duke of Cumberland stem wine glass c1740 for auction in London in 2011, Bonhams tells the story. Prince William Duke of Cumberland (1721-65), third son of King George II, was destined for a serious career in the army. As the leading British general of the day, he was chosen to put a decisive stop to the Stuart Pretender in the Jacobite rising of 1745. Cumberland’s appointment was popular, and caused morale to soar amongst the public and troops loyal to King George. As a result Cumberland is best known for his defeat of the Young Pretender at the Battle of Culloden, finally quash­ing the Jacobite Insurrection.

Prince William Duke of Cumberland might have been called "Butcher Cumberland" by Jacobite historians. But for everyone else, Cumberland was a hero. The drawn trumpet bowl glass was decorated with the bust portrait of the hero and inscribed beneath the rim Prosperity to the Duke of Cumberland, the plain stem with conical foot. 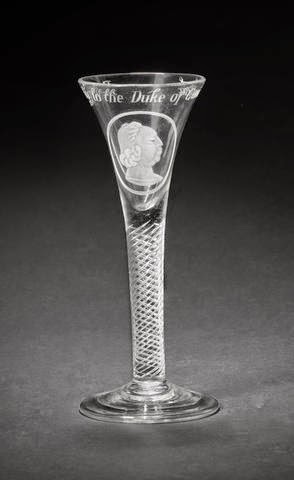 Another engraved Duke of Cumberland portrait wine glass c1750 was similar in design. The drawn trumpet bowl engraved at the rim with the inscription 'Prosperity to the Duke of Cumberland', above an oval portrait medallion of the Duke in profile. But this later glass had a multiple-spiral air-twist stem and folded conical foot. In 2013 Bonhams noted this belonged to a rare group of Anti-Jacobite glasses depicting William, Duke of Cumberland who defeated the Jacobite uprising at the Battle of Culloden.

They did not suggest why anti-Jacobite wine glasses were rarer than Jacobite wine glasses. Nor did they explain why the Duke of Cumberland's name and portrait were used, rather than King George and Liberty as suggested at the National Gallery of Victoria exhibition.

The Bonham estimated prices were not as expensive as I thought, given the anti-Jacobite glasses are rare, 18th century treasures.

Hello Hels, Politically-motivated souvenirs seem to mushroom with fad-like intensity during the event of their creation--I guess that feelings run strong, and people need an additional outlet. In the US Civil War, there was plenty of propaganda on both sides, each assuming that it would win.

In the U.S., creators of the school curriculum must have been pro-Stuart. I recall learning both "Charlie is my Darling" and "Skye Boat Song" in elementary school, but little else of British lineage. Perhaps they felt a bond with someone else who fought the Hanovers.
--Jim

Small private clubs and some masonic lodges... Doesn't seem a huge national basis for a popular movement, does it?

What are antique prices determined by? exquisite craftsmanship? rarity? taste (that changes from one decade to the next?

A rare amen glass which was passed round in secret Jacobite societies sold for £43,000 at a Shropshire auction house in Nov 2012 (see Shropshire Star). Yet most of the Jacobite glasses I could find cost between £2,000-£5,000. Very unpredictable!

Even the term Civil War is difficult to pin down. The American and French Civil wars were internal warring factions, fighting against other parts of the same nation. But the Jacobites were seen by many as outsiders, coming in from France to kill "real" Brits, using French finances and French royal support.

So yes indeed both sides needed plenty of strong propaganda, especially the Stuarts in Britain who had been seen by many as enemy outsiders. But... but... Stuart propaganda inside Britain was hugely risky.

Where could the Stuart supporters in Britain safely meet with trusted colleagues? In their private homes, preferably country homes; men's clubs etc etc. but only where the participants could trust every other man who was invited to dinner. How was that determined? Via secret rituals that only Stuart supporters would know, and by doing their due dilligence first.