Mark Rothko: from expressionism to abstraction

To say that, until the C20th, western art had few visual artists of Jewish ancestry is silly. The Pissarros and Simeon Solomon were not odd exceptions; the culture may have produced verbal rather than visual imaginations in earlier centuries but that was no longer true during the Age of Enlightenment. Collectors looked for 19th century artists like Moritz Daniel Oppenheim, Isador Kaufmann, Maurycy Gottlieb, Joseph Israels, Solomon A. Hart, Abraham Solomon and Max Liebermann, to commission or buy their wonderful paintings.

Nor can we say that Rothko and his colleagues introduced modern art to the USA. That honour is usually said to belong to The 1913 The International Exhibition of Modern Art or Armory Show in New York's 69th Regiment Armory. It famously exhibited contemporary paintings, sculptures and decorative works by hundreds of Europeans and Americans at a time when Rothko was still in primary school.

Now is the time to read Annie Cohen-Solal's book Mark Rothko: Towards the Light in the Chapel. Mark Rotkovitch (1903-1970) was born in Dvinsk Latvia in 1903, did his primary schooling in Yiddish and Russian, and immigrated to the USA with his parents and siblings just before the Great War started. It was inevitable that a child who did not speak a word of English would not find integration easy, but had the family gone to New York or Chicago, it would have at least  been easier. Instead they went to Portland Oregon.

This clever, bookish lad eventually became a scholarship student at Yale but that too was a miserable experience. The university, as represented by the dean, was elitist and racist. The dean specif­ically wanted to “put a ban on Jews” so Rothko left the university without a degree..

It is difficult to know why in 1923 Rothko chose to join art classes at the New York School of Design and become a full time artist in that city. But he did, and was particularly influenced by Russian Jewish cubist artist Max Weber. By the late 1920s, Rothko was teaching at the Brooklyn Jewish Centre’s art school, joining with other art colleagues in avant-garde exhibitions and confronting the art establishment. As the Great Depression rolled on, Rothko's parents were terrified that a career messing around in art would leave their son impoverished once again. 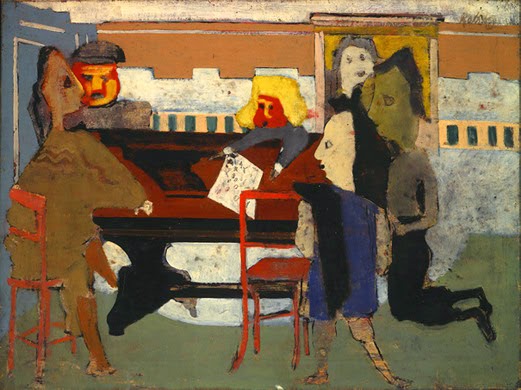 Max Weber had painted in a figurative style influenced by the ideas of Pablo Picasso and Henri Matisse. During the 1930s Rothko added Surrealism to the mixture and was interested in bringing all these styles together in paintings that expressed the tragic nature of human existence.

In late 1935, Rothko joined with all the other Jewish abstract expressionist artists (Ilya Bolotowsky, Ben-Zion, Adolph Gottlieb, Lou Harris, Ralph Rosenborg, Louis Schanker and Joseph Solman) to form the Whitney Ten Dissenters. Their goal was "to protest against the reputed equivalence of American painting and literal painting.

The abstract expressionist artists who worked in New York after World War Two made an internationally important contribution, particularly Rothko. He had experimented with figurative, surrealist and mythical imagery, but now Rothko’s art was made up of horizontal colour fields floating and dissolving. Cohen-Solal noted that as Rothko had been so thoroughly immersed in Jewish culture, it would explain why he was emerging from minimalist abstraction. His stunning floating abstracts of dissolving oblongs survived. He had become one of the founders of a new generation of 20th century art movements.

Rothko’s canvases from this period were becoming showy. But although there is the suggestion that these paintings did not really work, there is a clear recognition that they were starting to attract attention. How strange.

The artist did not know when he was going to die, but he devoted what turned out to be the last decade of his life in presenting his new conception of art as an experience. Cohen Solal’s story peaks with Rothko’s most radical project, the Rothko Chapel in Houston Texas.

In February 1970, Rothko's assistant found the 66 year old artist lying dead in his studio. He had overdosed on anti-depressants and sliced his arms with a razor. The young Russian immigrant from Dvinsk, moody and unhappy all his years in the USA, is now considered to be a crucial change agent of the art world. Orange, Red, Yellow was a 1961 Rothko that sold at Christies for $87 million in May 2012. The sale price was a record price for Post-War contemporary art at public auction and for Rothko works in general.

Recently (2003) the Latvian city Daugavpils/Dvinsk erected a monument to their most famous son on the river bank. A decade later the artist’s children donated original works and placed them in the Mark Rothko Art Centre in Daugavpils. 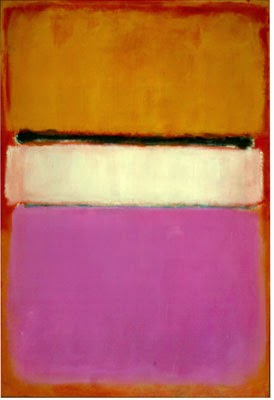 Annie Cohen-Solal wrote Mark Rothko: Towards the Light in the Chapel in 2012 (published by Yale University Press). Readers will also find the Spectator’s review of this book useful. But be warned; the review of this book in the Spectator unleashed a torrent of anti-Semitism. Whether people like modern art in general, or Rothko in particular, should not concern us. But to attack modern art, socialism and Spinoza because they were Jewish is vicious.

Hello Hels, I looked at that article, and since it was in a general publication, not a specialty site, I wouldn't really consider the low quality of the comments. After all, there were a number that basically said "modern art is stupid", so one has to consider the source. That said, it is shocking how in an age when diversity is celebrated, a grim antisemitic tone so constantly comes up.

About the paintings, a number of important and beautiful Rothkos were sold last year (for apparently huge prices) with the breakup of the Bunny Mellon estate; I tried to check quickly on the distribution, but the sales history seems rather complicated.
--Jim

In understanding why a famous artist would suicide, we might have to look to his unsettled personal life rather than his art. What happened to the first wife. Were the children loving.

The interesting thing for me was changing my research question half way through. I started asking why did an artist move from popular expressionist works to unknown and risky abstractionist works. Then I became more interested in how an individual artist fulfilled (or not) the migrant dream.

Re the Bunny Mellon estate, I too will need to learn more. Many thanks.

How far back did Rothko's depression go back in his life? What a sad story!

He was married to the decorative artist Edith Sachar from 1936-43. He was rejected by the army on health grounds and apparently he was too humiliated to go home. Strange grounds for divorce, but who knows what the truth was.

Rothko was also diagnosed with a heart condition in 1968 and soon suicided. He was survived by his second wife, Mary Beistle, but she too soon died and their two very young children were raised by relatives.

Matt Nesvisky wrote: Cohen-Solal would have been on firmer ground exploring the group involved in the American Abstract Expressionist movement of the 1940s and 1950s, when so many artists and critics and gallery owners promoted a radically intellectual non-pictorial art. Think of Adolph Gottlieb, Barnett Newman, Morris Louis, Helen Frankenthaler, Max Ernst, Peggy Guggenheim, Harold Rosenberg and Clement Greenberg.

Rothko really did begin his career exploring a wide range of modernist art. So it was just as well the then-young artist was surrounded by like minded risk takers, artists who were themselves on the fringe. Being alone in a new country, with new art forms, would have been horrible.

Let me create a link to Art & Artists, a blog that reproduced many Rothko paintings: http://poulwebb.blogspot.com/2016/12/mark-rothko-part-1.html

I normally love WPA murals because they were so Deco and proud, celebrating workers or other vital people who contributed to the community. But Rothko's 1937 Subway mural looked isolated and depressed.