Gardens at Wombat Park, Daylesford - a legacy from goldrush and from Edwardian days

The story of Wombat Park (Midland Highway Daylesford) began in 1854 when grazier William Stanbridge built a modest, timber homestead and began planting a magnificent garden. His collection of exotic trees was to be described in the local paper as superior to any that could be seen in any private or public garden in the state of Victoria. The extensive and varied garden is still one of the jewels in the crown of Victoria’s garden heritage. 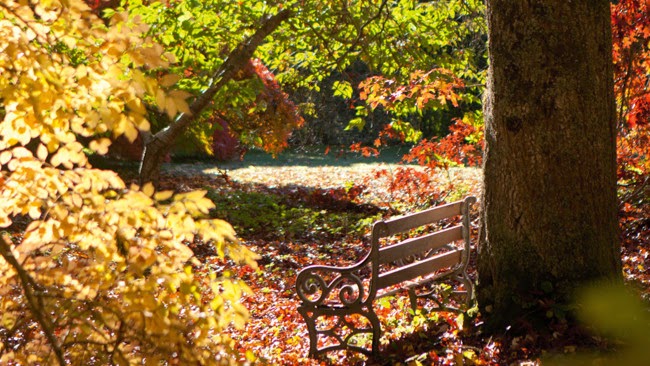 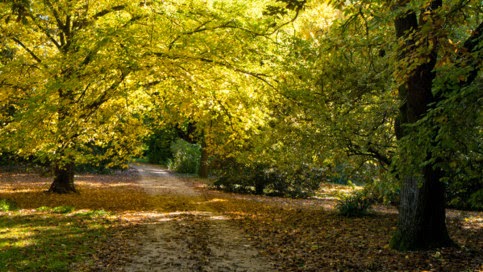 William Stanbridge was a Member of the Legislative Assembly who became wealthy from the 1850s gold rush. By 1860 Stanbridge had built a substantial brick stable and coach house complex and by 1872 a second homestead (which was relocated to Daylesford in the 1930s). He had also laid out a garden in the rich red volcanic soil. In what is now known as the Old Garden, later owners uncovered beds surrounded by quartz gravel paths and box hedges.

At the turn of the C20th, Stanbridge’s daughter Florence and her husband built a splendid Arts and Crafts style house and created, with landscape gardeners Taylor and Sangster, what has become known as the New Garden. The entrance to the 160-hectare estate is a long romantic avenue of spreading English elms that dates from Florence's time, as does the famous crenellated tapestry hedge, the largest and oldest in the country. These are both listed on the National Trust Register of Significant Trees.

The pleasures of English style country life on the croquet lawn, under the shade of a deciduous forest and meandering pathways that seamlessly link the gardens and the farm, are much appreciated today. 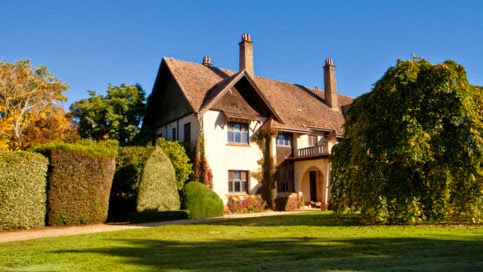 The Arts and Crafts style home today.
There is a 1913 photo in the National Library of Australia that shows these same gabled roof, windows, chimneys and covered entrance that were built for Stanbridge’s daughter.

When the Mackenzie family bought Wombat Park in 1996, they took on a wild and beautiful place. Since then, Isabel Mackenzie, with gardener Stewart Henderson, has overseen and implemented the steady restoration of the structure of the whole garden. At the same time, they lovingly preserved a unique past.

While the Wombat Hill Botanical Gardens are open all year around, the family garden is only occasionally open to the public. So join Friends of Wombat Hill Botanic Gardens for a delightful day in the country with delicious food, wine, coffee and a superb range of plants from Lambley Nursery. View one of Australia’s most impressive and historic private gardens, experiencing the vivid autumn colour, historic plantings, National Trust Register listed trees and the sweeping scale of the Sangster and Taylor designed Wombat Park. All proceeds from the opening will support the restoration of the historic fern gully and cascade at Wombat Hill Botanic Gardens in Daylesford. It will be open from 10 am – 4 pm on Saturday 2nd and Sunday 3rd May 2015. 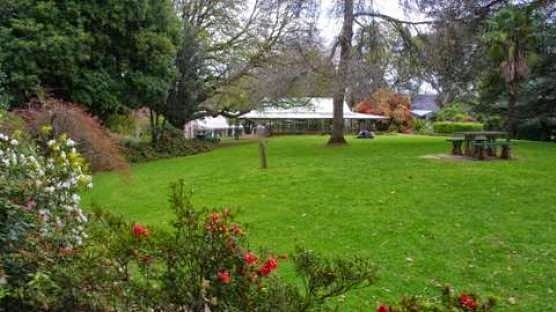 Many thanks to Barbara Strange for sending me this material.

You mention the Wombat Hill Botantic Gardens. Are they a mass of exotic trees as your photos show, or actual gardens? Where is the cafe

the Wombat Hill Botanic Gardens are full of paths, garden areas, Pioneer's Memorial Tower, a scenic drive with great viewing points of the town below, a conservatory, Wombat Hill House Cafe and ferneries. I have added a photo to the post.

While I have been to Daylesford a few times, I wasn't aware of Wombat Park. While native plants have their place, how glorious are English style gardens, at time modified a little for our climate.

I, too, used to argue that if trees weren't evergreen in general and Australian natives in particular, we shouldn't be planting them.

But Wombat Park is utterly gorgeous.

So is the cafe.

Amazing photos! They make me dreamy. I am in Canada. Our winter was harsh and our spring is blah. My lawn is still covered with a good foot of snow. Boohoo! LOL ;-)

the best thing about blogging is introducing the reader to new experiences in places he/she don't live in. So although I love every summer on the Australian beach, I still want to spend my precious 4 weeks of holiday time overseas.

I have family in Winnipeg and Vancouver, and get to Canada every 3 years. In return, you should visit us here! Welcome any time but preferably not in our wet, cold months (June, July and August).

I hope you noticed the amazing pendant light fitting in the portico at the front door of the house Womabt Park. I was there a long time ago but am sure it winds up and down.
There were intriguing outbuildings too.
Daylesford's Wombat Gardens has a tower to climb for a stupendous view but it is steep and narrow and passing anyone else going up or down really requires an introduction prior to the body pressing.

I checked the National Trust Data Base before visiting Wombat Park, and all they mentioned was "the original light fittings and door hardware". That proves it! You have to go to special places with a knowledgeable tour guide OR read information-packed blogs before leaving home.

Re the views... the grandchildren absolutely loved every bit of the climb and the result. I don't do narrow climbs.

oh Hels I would never go up that tower again. Steeper than The Gods at the old Tivoli in Bourke St.
I have emailed you pics of the old portico candlelights.

The elm walk is enchanting. I wonder if they are golden elms or whether it is just the autumn effect?

I'm feeling rather bad as I really don't fancy Australian natives very much at all. But then I'm not a huge fan of NZ Natives either (so it's not personal)!

thank you for the pictures. You remember the Tivoli? It closed in 1966 and I wept for my lost childhood days of wonder.

The grazier William Stanbridge was born and educated in Britain before he travelled to Australia at 24. So he was always likely to plant trees from his part of Europe. But he was also regarded as a writer of Aboriginal knowledge, so he may well have been aware of native vegetation.

You clearly share some of the ambivalence that Andrew and I owned up to about English gardens in Australia.

My sister AOD is an old old woman dear Hels.
The cheap seats at the Tiv were so high it caused nosebleed for some. Going to a panto with an Aunt and the MC yells "who's having a birthday" and arm wrenched upward by savvy aunt so chocolates won by deceit.
1966 the CBD had daytime pop music gigs for groovy Dollybird typing pool chicks to groove away instead of eat in their lunch hour, and one 'Tenth Ave' was next to the Tiv. It is now a menswear store on the corner of the lane going up to Georges rear (oh I miss 'Marvellous Melbourne' it's all crap now. Did you read Remembering Georges. I wept. Must wake up my other sister JoanBatman at WalkingMelbourne and see if they discussed it.

sigh The Tiv closed in 1966 and Georges closed in 1995! Civilisation as we knew it had ended.

It was the two grandmothers' responsibilities to teach my brothers and me how to behave nicely. We went to both pantomimes each summer holiday, one with nana and one with grandmama. Then to Georges for lunch, with the waitresses in black and white outfits.