But when Meryle Secrest published her book Elsa Schiaparelli : A Biography (Knopf) in 2014, my certainty about this well known woman suddenly disappeared. She was of course not the first famous person in history to hide her past. But Schiaparelli’s story was more veiled in mystery, confusion, lies and omissions than most. Even the supply of wonderful photos in the book may have been staged.

Elsa Schiaparelli (1890–1973) was born into a quiet and scholarly family in Rome in 1890. Convinced from an early age of her ugliness, and clear about the need to avoid her parents’ marriage plans, she quickly moved herself to Paris. After Paris she then moved to London where, in 1914, she married a strange conman called Wilhelm de Wendt de Kerlor. After de Kerlor was deported, Schiaparelli followed him to New York. There they had a daughter, Maria Luisa/Gogo but once de Kerlor deserted the family, he was never seen again. Unfortunately for young Gogo, her mother was not a very warm or attentive parent either.


Elsa returned from the USA to Paris in 1922 and had one of those serendipitous events that change lives. Thanks to a friendship with Gaby Buffet-Picabia, ex-wife of the Dadaist artist, Schiaparelli was introduced to a wide range of new and influential artists, including Francis Picabia, Jean Cocteau, Man Ray, Salvador Dali, Marcel Duchamp and the incomparable Paul Poiret. Schiaparelli readily acknowledged Dali’s role in designing her fabrics and acces­sories. And thanked him for introducing her to decadent, arty parties. 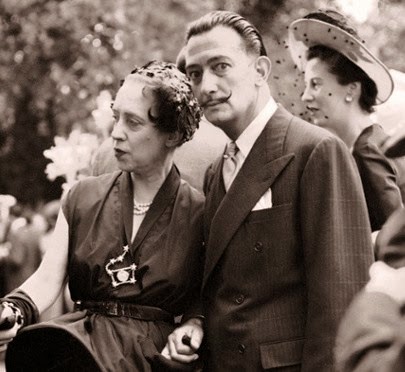 I imagine that the Pour Le Sport collection, which expanded in 1927, was seen as revolutionary. Her bathing suits, ski-wear and divided tennis skirts, were sensible and smart. Her silk crepe dresses, short fitted suits or jack­ets teamed with black dresses were classical. She soon added evening wear to the collection, and her Paris business boomed. Her shocking pink colour, used in dresses and perfumes, was memorable.

The Depression years must have been uncertain for anyone in a luxury business. De­sig­n­ers found that increasingly modern and luxurious clothes would not appeal to families who were unemployed and often hungry. So Schiaparelli made masculine, non-luxurious dresses with wide shoulders, narrow waists and zips. F. Scott Fitzgerald’s world came to life in clothes designed for travelling in lux­ury lin­ers, trains or motoring in streamlined cars. It must have worked; she made an enormous amount of money. In 1935 she was able to move into a huge mansion on Paris' Place Vendome and opened a large salon on the ground floor. By 1932 she was a tough boss, responsible for 400 workers.

She was most creative in the years before war broke out in 1939, teaming up with Dali and Cocteau and obscuring the boundaries between art and fashion. Did Schiaparelli copy Hollywood or did Marlene Dietrich, Katherine Hepburn, Greta Garbo (who moved to the USA in 1924), Fred Astaire and Ginger Rogers keep up-to-date with Paris’ trends? Paris designers like Schiap­arelli readily acknow­ledged the impact of film costumes on their work. But with freedom of move­ment her design goal, Elsa Schiaparelli (and a few other French designers) created the first real style for the modern wo­m­an in the fashion capital of the world. Paris, not Hollywood!! But that leads us to another question. During the 1930s, when Schiaparelli and Chanel were great designer rivals, who led and who followed?

The worst part for me was when Secrest reported that the dress designer was most probably a German spy during the early years of WW2. Schiaparelli was a friend both of Otto Abetz, Hitler’s ambassador to France, and Gaston Bergery, one of the Vichy regime’s senior figures. This sounded very familiar. After the Germans occupied France in 1940, Coco Chanel lived with Nazi officer Hans Gunther von Dincklage in the Ritz Hotel in Paris. And Chanel became a very close friend of Nazi General Walter Schellenberg 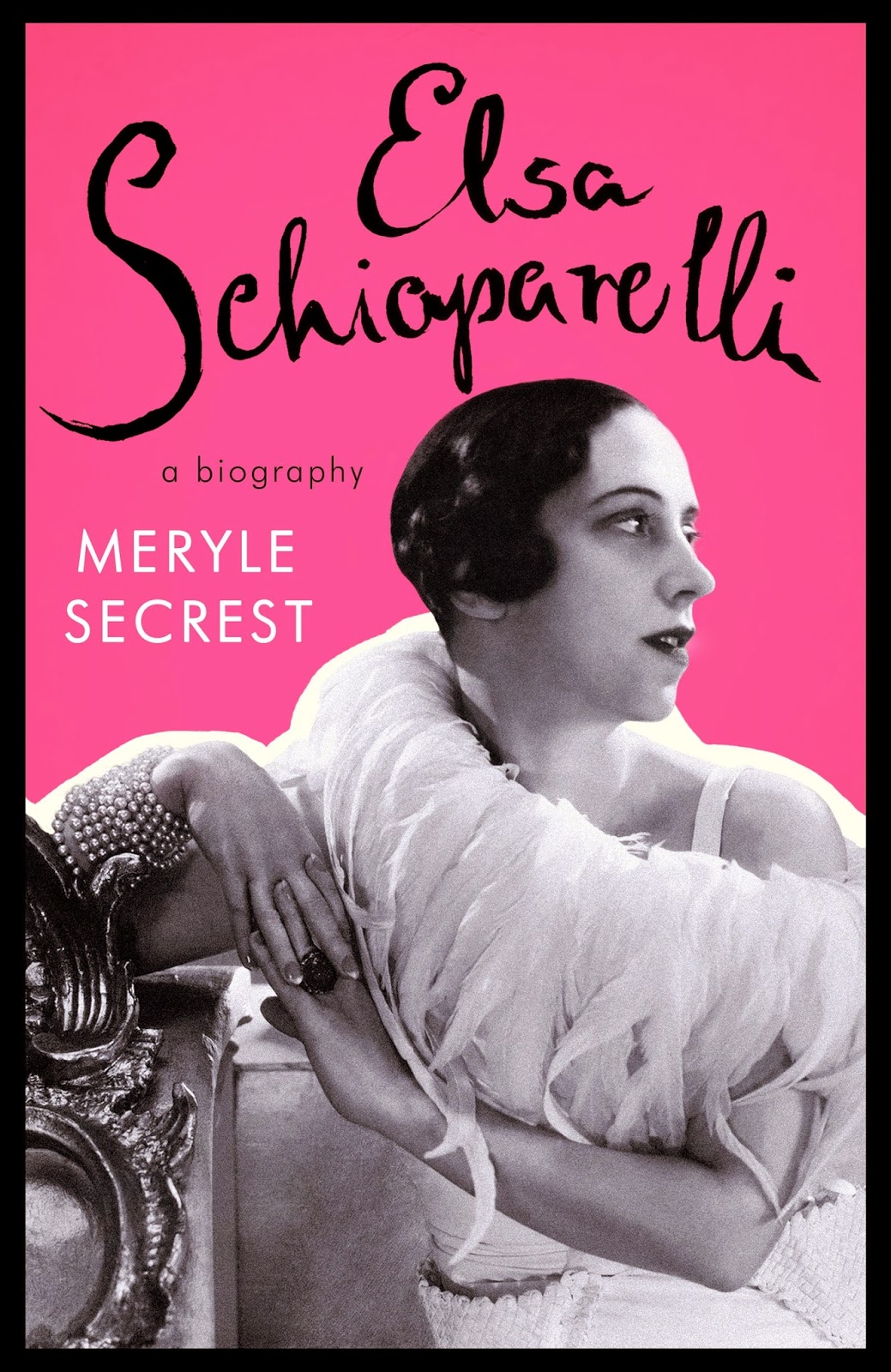 The book Elsa Schiaparelli : A Biography
written by M Secrest
Note the Shocking Pink used in the background

Schiaparelli moved happily between France and the USA, even after France was occupied! But eventually she moved to the safety of New York. In 1942, she helped Duchamp organise First Papers of Surrealism, an exhibition which raised money for French relief charities. She volunteered as a nurse’s aide. She refused to design clothes in exile, out of solidarity with the designers and workers in Occupied Paris.

When the war ended and Schiaparelli returned to France, she was questioned by the authorities but never charged with collaboration with the Germans. This again reminds me of Coco Chanel.

Though she hired a young Hubert de Givenchy as her assistant in post-war Paris, Schiaparelli's designs were no longer sensational and her business closed in 1954. She became a cranky old lady.

Hel when I first saw Dali's lobster telephone, I thought he was strange. Schiaparelli's lobster dresses were also a bit strange but she was a smart woman. Flamboyant yes, but her clothes were still practical enough to wear.

As always, such an interesting discovery of someone I did not know about. Could collaborators be morally divided into active and passive? You would have a better idea than I would.

When Schiaparelli recovered from a distastrous marriage and went back to France, I imagine meeting the influential artists would have been exhilarating. As strange as Salvador Dali and Man Ray etc were, they were her connection to modernism. Imagine the parties and the cabarets!

surviving in war time Paris would have been a nightmare. Citizens who opposed the German and French Fascists.. left Paris asap. Citizens who supported the Fascists learned to live and survive as best they could.

Does being close friends with a Nazi officer mean Schiaparelli was a collaborator? And remember Secrest actually used the word "spy"!! I don't think we will ever know.

About Coco Chanel, we do know. She lived in luxury with a Nazi officer in the Ritz Hotel in Paris. And travelled to Berlin with him on business. Chanel didn't desert Paris for the USA in 1942 like Schiaparelli did.

Hello Hels, The charge of Nazi collaboration is especially serious among charges of betrayal or espionage, because of the uniquely evil nature of that organization. So many celebrities have been accused (Chevalier, Wodehouse, etc.), but often there is little proof, or they were acting under evident duress. (Clearly, there were also rotten skunks like the Mitfords, Edward-Wallace, and some others you have discussed.)

Considering the positive war work Schiaparelli did that you mention, I would want clear proof before putting her on my personal black list. (That wouldn't be such a dire threat anyway, considering how little I know about that world of fashion and couture.)
--Jim

I have that same problem with so many important human beings in modern history. Do I stop reading Dickens novels, just because he was a pig to his wife and destroyed her family life? Should we downgrade the genius of Einstein because he dumped his sons in Switzerland and never saw them again, leading to one son's suicide?

No, human beings are flawed. Schiaparelli was a clever and innovative designer who brought joy to women all over the world. I hope that is her legacy, not her politics during WW2.

Thanks for another informative post H.
without having to read a book or search, I know things about 'Schiap' that are not on your summary.
She hung with Dali, Cocteau and the Surrealists and Bernard Berenson.
Berry and Marisa Berenson her grand-daughters, one married Antony 'Psycho' Perkins and then was killed in a famous big plane crash. Marisa a VOGUE covers model. at Pinterest.com just put 'Schiaparelli' into the searchbox and up will pop an image of every fabulous frock or hat she ever made because somebody else has tracked it down and Pinned it up. I love the internet.
Coco the cockroach-like survivor of hard times just viewed the damn NAZIs as another hurdle in life. better to get from them what you can I think.
Self preservation is a basic instinct and those who have never needed to employ it are the ones who sneer at her as a 'collaborateur".

Just thinking that maybe that NAZI whose war was at the Ritz with Coco was just 'surviving' too. he may not have been a committed member. I have a dear dear lovely clever aged friend who wore the Hitler Youth medal when at school. "because we all had to" Her Russian aristocrat mother posed as a boy in the army to survive the revolution.
My friend's story of survival is extraordinary yet she lives anonymously, unlauded in Rosebud Victoria. I should write her book.

Hels your reply to Parnasus re Dickens etc touches on something that comes to me frequently, as only 2 nights ago when enjoying the doco on Lewis Carroll the paedophile (despite the brainless presenter). Do we shun the brilliance of Alice In Wonderland because he was clearly one Dirty Old Man? Do I never enjoy the wonderful 'RockNRoll Parts 1 & 2' because Gary Glitter is now revealed as disgusting? The brilliant Polanski films ditto? or Woody Allen's?
How do we shun brilliance in fashion, film, art, literature etc because the source is 'not nice'?

Remember sitting in the State Library, trolling through lots of old reference books looking for tidbits of information? I love the internet too :)

Re Dali, Cocteau and the Surrealists, agreed. I discussed them because their influence on Schiaparelli was so clear, both in design terms and socially. But Bernard Berenson? He (born in 1865) was a full generation older than Elsa and so suited up all the time, I am surprised he didn't bore her to pieces.

that is a question that has also bothered me for a long time. If we focus on the artist/writer/musician's sexual sins or financial immorality, there would be no-one on the planet left to enjoy. And there is the question of immorality being generationally-specific anyhow eg Lewis Carroll's behaviour is abhorrent now but might have been perceived as borderline or perfectly acceptable back then. Or they may have behaved as they did, as you say, because they needed to survive in horrible situations.

But there is a limit! Pollock was a fall-down drunk and womaniser who made his wife's life very painful. But here is the kicker. He died in a single-car crash while drunk as a skunk AND killed one of his young passengers. The other young passenger was brutally injured for the rest of her life.