The history of walking sticks comes from 18th and 19th Century blog and from The World of the Walking Stick. Many thanks.

When swords fell out of fashion, canes were substituted, held to the outfit by a ribbon. Then they were hung around the wrist by a thong. Then the walking sticks swelled to the thickness of broomsticks, with a sizeable nob; as the fashion grew older, they grew longer. In time the sticks functioned to support people who had trouble walking, although some people carried the sticks merely for amusement.

By the mid C18th, the Rococo style was beginning to cause a strong reaction by critics who thought this style too extravagant. The critics demanded a return to a noble, more sober Classicism. The classical notions of order, restraint, and balance gradually took the place of the carefree flamboyancy of the Rococo style. Walking sticks became more stable, with an emphasis on the calm, simple line.

Walking stick manufacturing became big business by the early C19th, and soon the principal London manufacturer reportedly sold 150,000 walking-sticks made of English wood. The sticks were also manufactured in Germany, where whalebone or rhinoceros varieties were claimed to be far superior to those made in other countries. In particular the Ducal State of Hesse was important, as was the city of Hamburg. There Herr Meyer was displayed his fabulous sticks at the Great Exhibition of 1851. Lastly the city of Paris was very involved in walking stick manufacturing.

Walking sticks were made from a wide variety of materials eg European trees like ash and beech. But walking sticks were also created from whalebone, tortoise shell, ram's horn, rhinoceros' horn, narwhal-horn or ivory. The sticks were then sand-papered and smoothed, stained and varnished. Finally adornments were added to the sticks and this endless variety of decorative appendages could include pearls, gold, silver, ivory, ebony, agate, jasper or jade. 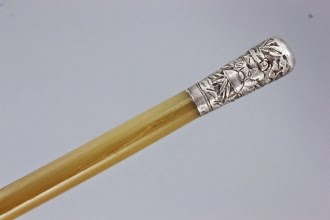 System canes were hollow at the top and could hide stuff inside (eg documents, letters, secret dispatches or small weapons) or could convert into other objects like seats, music stands and hammers.

A satirical book of the 1800s, titled Hints to the Bearers of Walking-Sticks and Umbrellas, provided further information on the sticks and noted the proper mode to carry a walking stick so as to avoid accidents, rudeness, or awkwardness when out in public.


The question now is “why are walking sticks made from rhinoceros horn so valuable”? The very legislation that tried to protect the rhino­ceros from slaughter and extinction ..made rhino horn rarer. This in turn raised the price of existing horn and made it even more attractive for poachers to illegally slaughter the beast. Rhino horn, now worth about $65,000 a kilo, has attracted international organised crime groups that are usually involved in the trafficking of drugs, arms and humans. It is more valuable than gold. 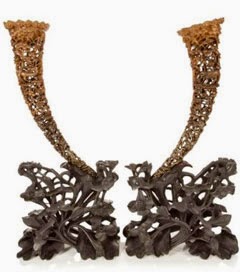 There are currently c25,000 rhinos in Africa and they face extinction if poaching continues at current rates. In order to legally sell any OLD rhino horn object, European salerooms have had to gain approval from the Department for Environment, Food and Rural Affairs/DEFRA. Newly cropped horn has been totally banned since 1975.

Clearly rhino horn was always one of the most precious organic materials used in canes. Its extremely high price made it affordable for the very few. But now even more so, as these examples will show.

A fine Chinese swagger stick c1850 is 65 cm long. The shaft of tapering form is made from translucent toffee coloured rhinoc­er­os horn with an embossed silver top with a figure in Chinese landscape. In 2011, it sold at auction for £3,100.

A 19th century rhinoceros horn silver-mounted walking cane is 63 cm long. This long tapering stick is entirely plain, with a silver-mounted point and handle cast with scholarly figures within a garden. It sold for £6,000 in 2011.

It is a pity that such a well intentioned international? agreement had the opposite effect. I don't mind if the price of existing rhino horn gets to ridiculous levels, as long as new horn is not allowed to be harvested and more importantly, sold.

In Nov 2011 authorities at the Hong Kong International Airport made a record seizure of illegal rhino horns, estimated to be worth $2.2 million. Customs agents confiscated 33 rhino horns concealed inside a shipping container from Cape Town.

This must happen every day. Have a look at the photo in http://green.blogs.nytimes.com/2011/11/21/after-rhino-horn-seizure-conservationists-seek-enforcement/?_r=0

Hello Hels, Rhinoceros horn has long been valued in Chinese art, and museums possess many examples of the carved horns, but I was unfamiliar with its used for walking sticks. I have a number of Chinese walking sticks, but all are definitely carved from wood, and not horn of any type.

Incidentally, if the raw horn is worth $65,000/kilo, then these walking stick seem cheap at 3000 pounds or so. This would create an additional problem of important antique canes being cut up as a source material for smaller pieces. This is similar to Western antique furniture, in which large wardrobes are cannibalized as a source of antique hardwoods.

The only answer is if private collectors or users of rhino horn objects are met with scorn (or quietly being appalled) instead of envy.
--Jim

as the new horn becomes more protected and hard to get, the price goes up and up. As the price reaches astronomical proportions, the hunt for new rhino horn in turn becomes more urgent. It is a never ending and rather vicious spiral.

thanks for the reference... each horn on that table reveals a huge animal, with its face cut to pieces and left to die slowly. It is so tragic.

I have heard of a number of different values per kilo of horn, but they are all trending upwards... rapidly.

I too love walking sticks, especially those with silver knobs or collars. But it never occurred to me to check if the material was protected or legal. Presumably the rhino horn is so beautiful, an expert could tell just by feeling it that it wasn't timber.

My Grandfather was born in 1854. He had a wooden walking stick with a long rather dangerous looking sword inside. We have it still.

you are a very fortunate soul in that grandpa's treasures have survived. I mentioned the so-called system canes in the post i.e those that were hollow at the top or in the body, and could hide stuff inside. But I have never ever seen one!

There are items that you wonder if your children will keep in the family ? Ours is a Rhino handle silver sword walking cane , Brought to the USA by our Great Grandfather who was with the British Expeditionary force in Siam 1862 . Just happy it can't be sold in the USA ? we hope

I was having my will prepared and took the children around the house to examine my antique collections, to give them first druthers. They were ever so polite but said that after my sad demise, all my collectibles will go straight to Sotheby's for auction. It was not too surprising. We tend to loathe our parents' taste, quite like our grandparents' taste and adore anything our great great parents left.

You are very fortunate indeed to have your great grandfather's rhino handle silver sword walking cane, especially if it is still in good condition. If your children don't want it, leave the cane in a bequest to your state museum or art gallery, along with any provenance you have eg a photo of great grandpa in uniform or one of his letters.