Rural Australia was in a discussion with Buckingham Palace over a very expensive pair of handmade, silk pyjamas. The royal pyjamas were a gift from the people of the Victorian city of Ballarat to the Prince of Wales, later King Edward VIII, as we will see.


In April 1920 Edward Prince of Wales, representing his father King George V, arrived in Australia to thank us for our heroic participat­ion in the First World War.

After touring rural Ballarat in June, the Prince of Wales drove to the periphery of that city where he met the 400 women employed in the Lucas factory. Those women had already erected an Arch of Victory at the head of an avenue of trees, each named after a Ballarat soldier who died in the war. At the Arch of Victory, the women were massed on stands on each side. After singing God bless the Prince of Wales they presented the Prince with a pair of silver scissors and asked him to cut the ribbons which held the festoons of greenery across the arch. Then Mrs W Thompson, one of the principals of the firm, stepped forward and asked the Prince to accept pure silk pyjamas made by the factory women. The jacket was embroidered with the crest of the Prince on one side and a picture of the Arch of Victory on the other with the avenue of trees in the distance. 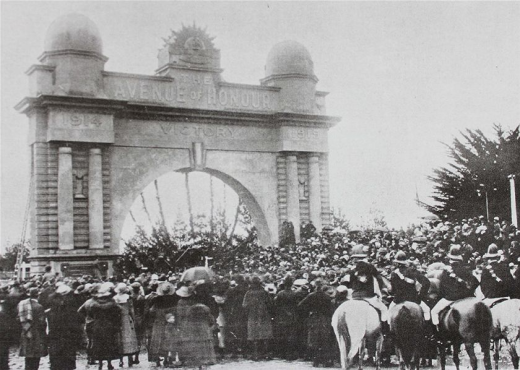 Crowds in front of Ballarat's Arch of Victory
awaiting the Prince of Wales' arrival, June 1920

Apart from working in the factory while their husbands had been away at war, the women also worked hard for the Red Cross and the Comforts Fund. So this was a gift full of World War One sacrifices, showing how the women of rural Ballarat had loyally supported their husbands and the crown.

By 2008, Ballarat was asking to borrow the pyjamas back, in order to display the gift at the Ballarat Fine Art Gallery with other artefacts. The Ballarat Art Gallery was interested in general in gifts made by Australians to the royal family, but in particular they had wanted draw attention to the local married women who worked in a factory for four years while their husbands were away.

A group of local historians, led by librarian Edith Fry, wrote to the Palace in 2008, requesting the pyjamas on loan. The royal secretary replied through the Royal Archives that the queen’s staff had no idea where the gift had ended up. It was suggested that when King Edward abdicated to marry Mrs Simpson in 1937, he may have taken the embroidered pure silk pyjamas in his suitcase to France.

This was not the first ever gift given to royalty, nor was it the most expensive. The exchange of official gifts on a State visit often served as a gesture of goodwill between the visiting and the host nation. The form of these gifts varied enormously, but they often used materials and craftsmen specific to that country and represented an aspect of its culture or heritage. 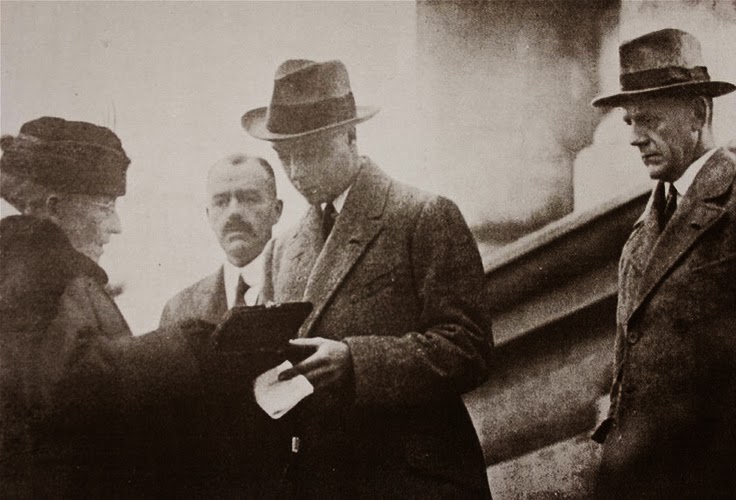 A presentation being made to the Prince of Wales,
in front of Ballarat's Arch of Victory, 1920

Official gifts were not the private property of the member of the royal family who received them; rather they were received in an official capacity in the course of official duties on behalf of the king or queen. As such, members of the royal family were responsible for such gifts on behalf of the monarch. As a general rule, all official gifts given to the sovereign, from a Head of State or host government, automatically became part of the Royal Collection. Or they could be placed on tempor­ary or permanent loan with a reputable organisation like the British Museum. Or they could be loaned back to the donor, with the gift details clearly identified.

Official gifts had to be acknowledged wherever possible, recorded and be traceable at all times. The key data that had to be kept about each gift were recorded a] in an official record and b] as soon as possible after receipt of the gift. That way, when information on official gifts was requested, a timely response could be given.

In this case, Edward was officially invested as Prince of Wales in July 1911; the Ballarat gift was made to him in 1920 as the repres­ent­ative of his father King George V; Edward abdicated in December 1936; he married Wallis Simpson in June 1937; the gift was sought by Ballarat in 2008; and by 2014 has still not be accounted for. This is not “timely”.

I did not like Edward, so I never minded if he cavorted with Freda Dudley Ward, Lady Furness, Wallis Simpson or any other woman across the British Empire. Nor did I mind if, 17 years later, he honeymooned in the silk clothes or used them to polish his antiques. (How long does silk last?) But I did mind that the precious gift from Ballarat soldiers’ wives and war widows was unaccounted for, or was later deleted from the royal archives.

In 2011, more than 90 years later, the Governor-General Quentin Bryce attended the Ballarat arch’s re-opening after restoration works. The dilapidated silver scissors, originally used by the Prince of Wales in 1920, were recently restored at Sovereign Hill and used by the Governor General to cut the modern ribbon. Very timely!

Hello Hels, I understand the differences and responsibilities of "official" gifts, but a pair of pajamas is such a personal item that even if given officially, it would have to be considered personal property. Moreover, any consumable or wear-outable item would have to be considered in a different category than, for example, jewels or cut-glass bowls. The idea of casting blame after all this time seems a little bizarre.
--Jim

I don't like the Prince of Wales either, but for a totally different set of reasons. Just as well he abdicated.

I don't think it would have mattered if the gift was a pair of silk PJs with Australian wattle, a maori canoe or a Canadian teepee. King George V's representative arrived in this rural city to thank for them for heroic participat­ion in WW1, to launch the Arch of Victory and to inspect the very very long avenue of memorial trees.

When the Ballarat Art Gallery later wanted show the contribution of Ballarat to saving Britain, Belgium and France, the Royal response was dismissive.

During and after WW1 there was no reason to suspect that the Prince of Wales would be anything but a normal heir to the throne then king.

It wasn't until 1937 that the couple married in France and then toured Nazi Germany as personal guests of Adolf Hitler. Photos and speeches suggest that the Duke and Mrs Simpson were sympathetic to Nazism. The trip was paid for by the Nazi government, in the belief that the Duke would work with Nazi Germany during and after the war.

Hi again, I see your point about the treatment of Ballarat Fine Art Galley, as representatives of Australian sentiment. If the artifact were truly lost, there was a tactful way to let them know, and to acknowledge the good-will that lay behind the original gift and the current request for its display.
--Jim

Only a pair of pyjamas from the colonies. We won't bother with protocols for them.

The Royal response needs to be better than dismissive if they wants us to continue our association with them. They may not care about our country town history, but we do.

I am very pleased you brought this to light.

exactly. And that was the response six years ago!

I think that on the 28th July 2014 this nation, along with many other nations, was particularly focused on WW1. The War To End All Wars has blanket coverage on tvs, newspapers, magazines, history courses and war memorials.