Golf and fine art in Edinburgh.

Golf has been played in Scotland since at least the 15th century. Whilst its origins are obscure, it is undoubtedly close to the Netherlandish game of colf, which was played over rough ground or on frozen waterways, and involved hitting a ball to a target stick fixed in the ground or the ice. Colvers playing on the frozen canals appeared often in Dutch 17th century paintings. 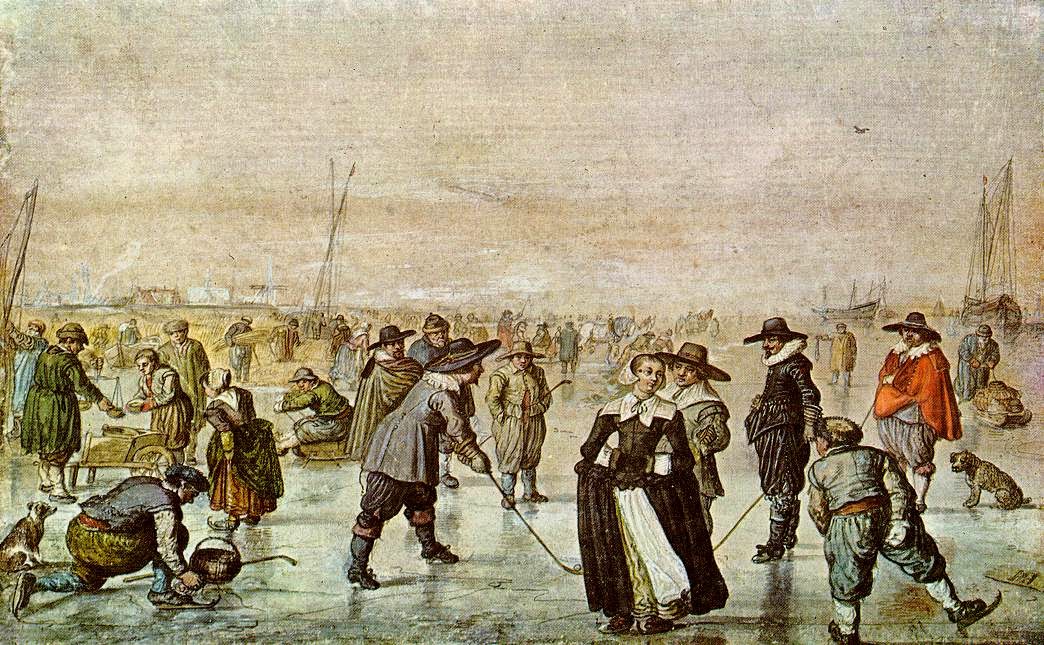 
There are many works by Hendrik Avercamp, for example, displaying a pale grey winter sky, a range of people socialising and participating in ice skating or colf. In the foreground, the viewer could easily see who was playing colf via the sticks they used. Avercamp may have been the first Dutch artist to use watercolours and gouache drawings in formal paintings and perhaps the first to make colf an important sport for artists to focus on. Note, for example, the delicate gouache colouring that created a sense of shadows on the ice.

In Scotland the game was often played over links courses, originally rough common ground where the land met the sea. The majority of Scotland’s famous old courses, such as St Andrews or North Berwick, were links courses.

At the Scottish National Gallery in Edinburgh, an exhibition called The Art of Golf tells the story of the birth and evolution of Scotland’s national sport by bringing together fine art, golfing equipment and museum pieces significant to the game’s history. I am not sure if golf is the national sport, but I know the timing of the exhibition has been excellent. Its dates overlapped with two important events: the Commonwealth Games in Glasgow (July-August 2014) and the Ryder Cup in Gleneagles (Sep 2014), the biennial competition played between teams of professional golfers representing the USA and Europe. 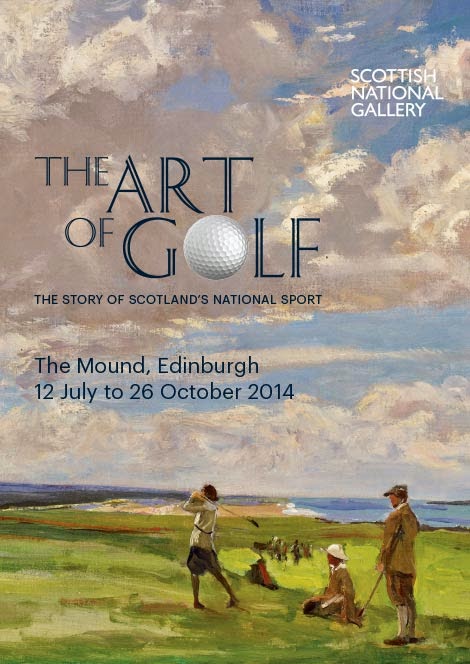 The exhibition starts in the early 17th century, as you would expect, with paintings of Dutch colf players. It then chart the origins of modern Golf in Scotland, including images of important early links courses in, for example, Leith. There are 60 paintings on display.

Moving into the C20th, The Art of Golf showcases a beautiful oil painting of the course at North Berwick, a coastal resort 40 ks east of Edinburgh. It was done by John Lavery, one of the Glasgow Boys. The exhibition also displays rare original golf-themed railway posters and takes the story of golf right up to the present day with aerial artworks of Scotland’s most famous golf courses, including Gleneagles.


The Edinburgh Reporter believed the centre piece of this exhibition is the greatest golfing painting in the world by Charles Lees (1800-80), The Golfers 1847. This work commemorated a match played on the Old Course at the Royal and Ancient Golf Club, St Andrews, by Sir David Baird and Sir Ralph Anstruther, against Major Hugh Lyon Playfair and John Campbell of Saddell. It represented a who’s who of Scottish golf at that time and was reproduced in a fine engraving and sold well. Lees made use of (early) photography to help him design the painting’s overall compos­ition. The painting is jointly owned by the National Galleries of Scotland and the Royal and Ancient Golf Club of St Andrews. 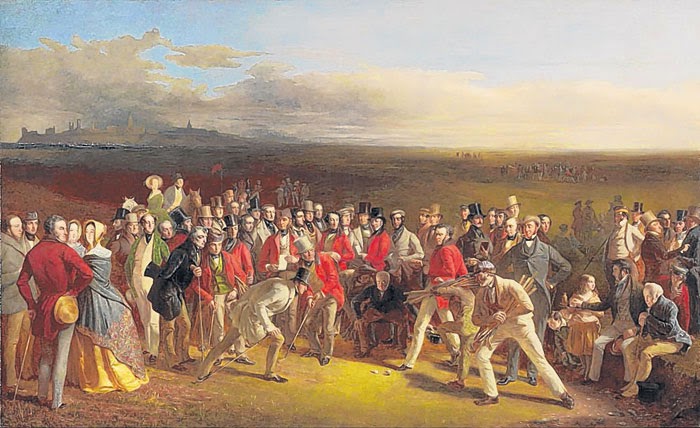 If art and golf fans miss the exhibition, I recommend the gallery's illustrated colour catalogue, with essays by Michael Clarke and Kenneth McConkey, Professor of Art History at the University of Northumbria at Newcastle.

I am assuming this is largely the same exhibition that went on show in Atlanta Georgia. Billed as the first substantial art survey on the subject organised by an American museum, The Art of Golf was on view in mid 2012 before touring four other American venues. The show featured 90 paintings, drawings, photographs and sculpture by artists as important as Rembrandt.

As in the Scottish exhibition, The Art of Golf in the USA tracked the game’s roots in the Netherlands and its development in Scotland, but then went on to give a specifically 20th century American feel to the history. Thus the artists included Scottish Enlightenment portraitist Sir Henry Raeburn and American artists James McNeill Whistler, Childe Hassam, Norman Rockwell and Andy Warhol. A humour section included Charles Schulz's Peanuts and sly New Yorker cartoons about golf.

I love my golf, but not full of people. The fairways and greens need to be quiet and people-free.

A very apt post given the Ryder Cup not far away, and my walk this morning past my late father's golf club here in Aberdour, overlooking the Forth, and the several sets of clubs awaiting collection by the clearing company on Monday. I did not know about the Dutch origins, and I'm sure the Scots would claim authorship, obviously.

Hello Hels, I wish that I could see this exhibit. There is something wholesome and appealing about this kind of sports art, even if one does not play the game in question.

Older sports memorabilia other than art is also fascinating. On my last trip home, I bought two 19th century wooden golf clubs stamped with the names of Scottish makers, but I have not had time to do any research on them yet.
--Jim

I have seen many 17th century Dutch paintings of colf and ice skating, and they are always crowded. Young people, old people, wealthy people, working people... they all seemed to socialise on the ice.

the timing of the The Art of Golf exhibition in Edinburgh was perfectly timed, for you, your dad and for the Ryder Cup :)

In one way the Scots have reason to claim golf as their own, designing golf as we know it today, albeit in a very basic form. The earliest known reference to golf by name comes from legislation drawn up by King James II of Scotland in 1457.

sports memorabilia in all media are important because they tell us about the non-working hours of a particular society. Images of golf, skating, beach outings, picnics, sailing etc show us that not all men spent their non-working hours in pubs.

Thus of all the art from every century and from every country, I think I love 17th century Dutch art best :)

I had a look at the stained glass depiction of a 14th century golfer and am impressed. Many thanks.

The blog Severe Deja Vu agreed that an early form of golf did exist in England and France in the C12th and C13th. But we don't know it as golf because the activity was called Cambuca, or Chambot in French.