My children certainly knew their grandparents spoke Czech (and Hungarian) at work in Australia, and they understood that their father spent his young years in Prague. But they had never seen a photo or painting of the Prague city-scape. After the government changed in 1990, my mother in law wanted to see her beloved homeland one last time, before she was too old to travel. So we all went, in 1993!

Within Hradcany/Prague Castle, and almost hidden beneath the castle's massive outer walls, lies a narrow street of uneven but colourful little timber houses. The 1 metre wide lane was built when an outer fortified wall was added to the northern part of Prague Castle, in the 1560s.

At this early stage, the 24 small houses were built by the Emperor Rudolph II for his castle guards or marksmen. Thus the space became known as Archery Lane. Rudolph was just another Habsburg Holy Roman Emperor from 1576–1612, but he had two unique qualities. Firstly he was the only Habsburg ruler to make Prague his permanent home and secondly he was a student of occult learning which helped promote a passion for state-funded science.


Now called Golden Lane, the original small houses with colourful facades are still built directly into the arch­es of the defensive castle walls. But if Golden refers to artisans who moved into the lane, what happened to the castle guards? When did they leave the area? Because of Emperor Rudolf’s passion for science, I can quite believe that the houses was were given instead to goldsmiths, and to alchemists who were asked to create gold out of base metals. 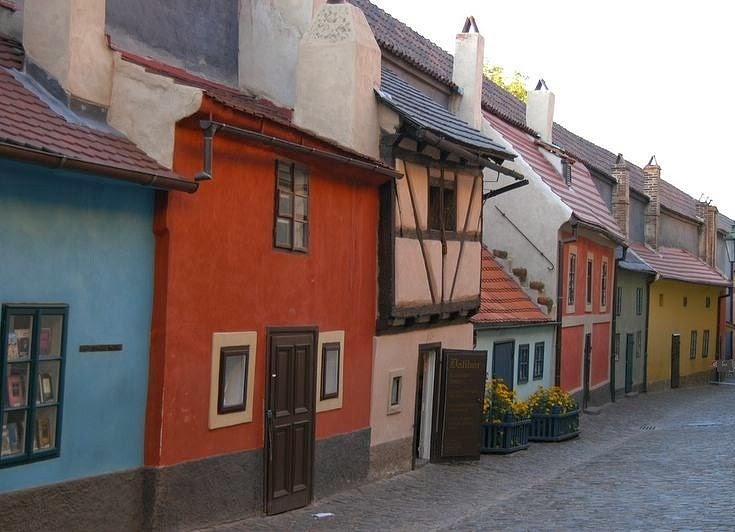 So until the C19th, there were 24 wooden dwellings along the lane. But unfortunately by then the houses on one side of the road had been condemned as unhygienic slums and were knocked down. Houses on the other side were left intact.

Can we use the word yuppified for Prague? Before WW1, Golden Lane had certainly been made more romantic and had become the preferred address of some of Prague’s members of the arts community. The most prominent of these was Franz Kafka, who lived in a house owned by his sister Ottla during WWI. The poet Jaros­lav Seifert, the winner of a much later Nobel Prize for Literature, also lived on the street as a young man in the 1930s.

After WW2, in 1952, the Czech government took responsib­ility for this historic site. From 1952 to 1955, the hous­es were properly restored and became souvenir shops or small museums and galleries. The facades were repainted, giving the street today’s brightly coloured appear­ance. [I'd like to know if these bright colours are historically accurate?]

Since then, some of the houses seemed to be collapsing. So Golden Lane was again renovated and was reopened to the public in June 2011. Now 7 houses are used for commercial purposes, while the other 9 offer historical exhibitions on Prague life in times gone by.

House #12 was home of amateur cinematographer and film historian Josef Kazda. The front room is a small cinema and old black and white films show Prague before WW2. Spools and canisters of film are stacked up the narrow staircase and film posters adorn the walls. House #13 is the residence of a Artillerymen-castle guard, including his uniforms and weapons. House #15 shows a goldsmith’s home and workshop, complete with his tools and working gear. House #22 was the sister’s house where Franz Kafka lived in 1916/17 and wrote some of his short stories. Her residence was presumably Kafka’s inspiration for his later book The Castle. House #27 shows a herbalist’s practice. One of his rooms was used as a doctor’s office and pharmacy, with shelves of bottles of botanical extracts on display. 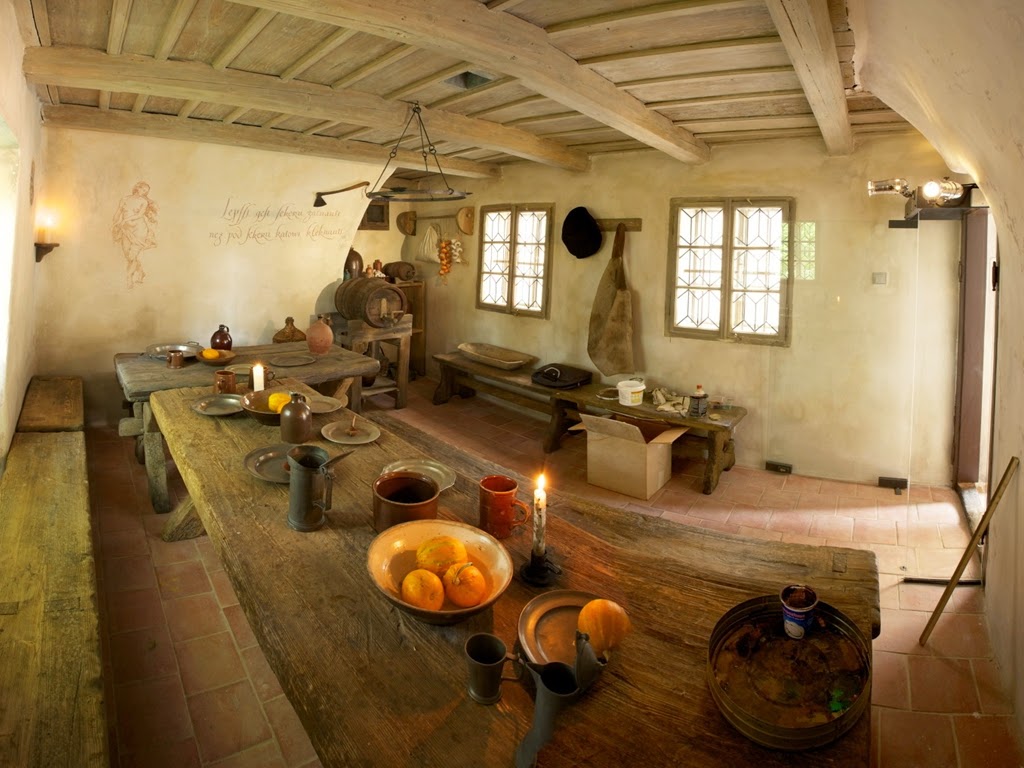 Interior of a craftsman's home in Golden Lane

Most of the rooms were based on real people who lived here, disp­lay­ing behind glass panels how owners decorated their houses with furnishings, wall stencils and embroidery. Thankfully Golden Lane was inscribed into the UNESCO World Heritage List in 1992.

At the end of the Golden Lane tour, visitors are encouraged to visit the round Daliborka Tower at the end of the street. One should avoid the torture instruments and instead climb to the top for wonderful views of Prague and its outstanding buildings. My mother in law's great joy was seeing her beloved suburb Josefov from the tower. She passed away the very next year.

What a beautiful story and so interesting to learn about the buildings and homes in Prague! Do you have many photos of them? I would love to go there and collect reference photos for drawings. The ones you have posted here are already fueling my imagination! How lovely that your mother-in-law was able to see this place before she passed away.

We also loved Prague. But why did Kafka, a famous writer, live in his sister's rather small home? He should have had enough money to pay his own rent.

you would adore Prague! It is one of the most interesting cities on the planet, historically speaking. I have tons of external photos of Golden Lane but no internal ones, so have a look at Virtual Tourist.
http://www.virtualtourist.com/travel/Europe/Czech_Republic/Hlavni_Mesto_Praha/Prague-400455/Things_To_Do-Prague-Golden_Lane-BR-1.html

Franz Kafka was unmarried, didn't like his dad and wasn't making much money. So his favourite sister Ottla took him in, to be supportive.

Franz died in 1924 of TB, still a young man :( And it didn't help Ottla either. All three of Franz Kafka's sisters were deported by the Nazis to extermination camps.

What a wonderful little street. I am sure I would love Prague. One day....

because I often lecture on Habsburg history, I was primed and ready to go with Vienna, Prague and Budapest. Not disappointing!!!!

The only recommendation is to read widely about the Habsburgs before you leave home. They were very cultivated and educated, but.. ummm ..different from other royal dynasties.

Hello Hels, It seems very fitting that this street, with its checkered history, exists in Prague. My introduction to that city was through the surreal filmmaker Jan Svankmajer, who surely would have found more evocative history during Golden Lane's years of decrepitude rather than its current colorful and restored incarnation.
--Jim

Prague was a very fortunate city in two ways. Firstly it was largely undamaged by WW2 and secondly the Russians preserved every single structure throughout their decades of influence. But not a penny of investment had been put into Prague since the 1930s. By the time I got there in 1993, the city was looking very grey.

Timing is everything! "Access 360 world Heritage" started on National Geographic tv tonight and spent the first episode focusing on Prague. The concern is for World Heritage sites that are being slowly destroyed by natural forces...and how to repair them.

I think I would love it there. It reminds me somewhat of Burano off Venice. I really enjoy house museums that show you what houses looked like in the past.

I think you would love it there, yes indeed :) There aren't too many places that have their original early 17th century cityscapes left intact. And a plastic Disneyland replica would be of no comfort either.

Prague was called the Magic City and not just because of the alchemists.

Adelaide Symphony Orchestra is going on a musical journey to the Czech Republic. The concert opens The Moldau - My Homeland with Smetana's evocative tone poem Ma Vlast, and continues the theme of nationhood with Sibelius' rousing, patriotic Karelia Suite.

Thank you. I think that "homeland" is indeed a universal theme and noone does it as well as Smetana