a feast of exhibitions for Edward Seago, a fine landscapist

Edward Seago (1910–1974) was not ever a healthy young lad. He was born to a Norwich coal merchant, and was given a proper education but not in art. I don’t suppose his parents were thrilled when he decided to become a professional artist but it was better than his other passion – travelling circuses. Just!

They seemed tough parents so perhaps Edward hid his young, gay lovers from their gaze. Life was clearly a struggle at chez Seago, both healthwise and in terms of family support.

He might have been bohemian and circus-y, but My Daily Art Display was right to discuss Seago's aristocratic patronage. One such man was the politician-industrialist-art connoisseur, Henry Mond Lord Melchett.  Seago and Mond travelled together to Venice in 1933, the most blissful place on earth for a young man planning a career in landscape art.

Seago joined the Royal Engineers in 1939 and was employed on dev­el­oping camouflage techniques, painting canvases only in his spare time.

After the war he started to become popular, exhibiting his works and selling them. I assume this was because of Seago’s close friend Princess Mary Countess of Harewood, King George VI’s sister. It was through this acquaintance that he was later to meet the rest of the royal family, especially the Duke of Edinburgh and Elizabeth the Queen Mother. To this day, some of his paintings hang at Balmoral. 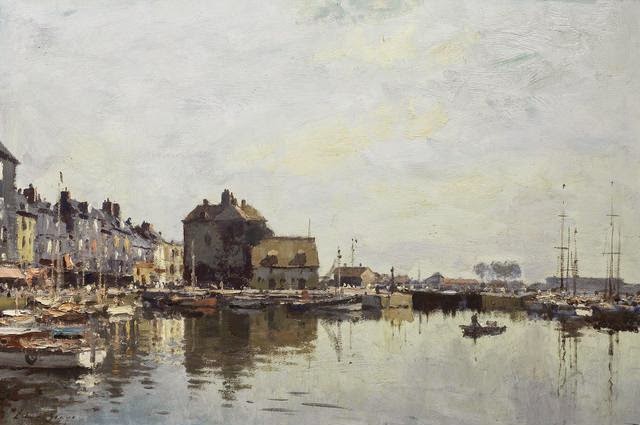 Seago made eight major painting trips to France in the 1950s and early 1960s, often to explore the coastal region and northern water­ways. For these trips Seago had his beloved yacht, The Capricorn, fitted with secure facilities for canvases and boards, stocked the companionway drawers with painting equipment and bought provisions to last up to three months at a time. He sailed along the coast, then on the Seine towards Paris, mooring en route to paint scenes in and around Dieppe, Rouen and Honfleur.

Reid* suggested Seago’s infatuation with Honfleur in particular might have stemmed from his admiration for the Honfleurais artist Eugène Boudin, a pioneer of the en plein air method that Seago adopted so heartily. And, I would add, from an admiration for Claude Monet.

This satisfying time was form­ative within the artist's life; as Seago developed new techniques, embarked upon new subject matter and explored new uses of colour, a greater confidence appeared in his work. He seemed to explode in a burst of creative energy. Like the old Dutch landscape artists, Seago valued atmosphere and light above all, as long as they were representative of the northern landscapes he painted in. He did not appreciate bright colours that would have better belonged in the tropics. 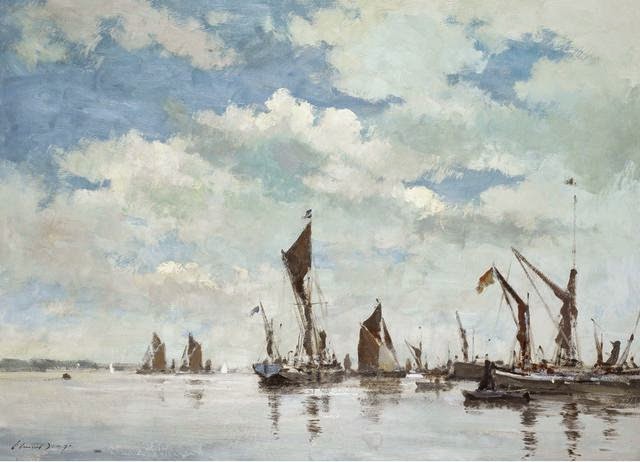 Reid* also noted that, from the 1950s on, Pin Mill in Suffolk became for Seago what Argenteuil had been for Claude Monet in the early 1870s. Like Monet, Seago was drawn to Pin Mill's maritime activ­ities. A keen sailor himself, he became a member of the Pin Mill Sailing Club and found the club's activities and landscapes to be wonderful subjects for his art. The Pin Mill painting above captured the moment in which the sailing competitors gathered in the town, resting on gentle waters early in a bright August morning, the air charged with Regatta excitement.

Seago died of a brain tumour in London in 1974, only 64 years old. In his will he requested that one third of his paintings in his Norwich studio at the time of his death were to be destroyed. Nonetheless thousands of water colours and oil paintings still remain in public and private collections.


Exhibitions
20 works by the Norfolk painter Edward Seago are being hung in the ballroom of the royal residence at Sandringham, which was open to the public for the northern summer 2014. Subjects ranged from the wedding procession of Princess Elizabeth and the Duke of Edinburgh, in 1947, to racehorses thundering down the final straight. Landscapes include the rugged terrain of far-flung islands in the South Atlantic, the sand dunes at Happisburgh and King’s Lynn waterfront.

Richard Green in London also pres­ent­ed a Seago exhibition in summer 2014. As at Sand­ringham, his emphasis was very much on East Anglia and boating scenes. In April 2016, Richard Green is showing 27 Norfolk and Suffolk subjects in Bond St. Both land- and seascapes will be there, including Calm morning, Pin Mill. where the light was incomparable.

Another exhibition was at the Portland Gallery  in London, which represented the Seago estate. Here 50 works included early paintings inspired by Alfred Munnings, such as After the Ploughing Match (1936). But mostly his works depicted the rambling countryside and rippling waters of East Anglia under scurrying clouds in a vast sky. Portland Gallery, in association with Lund Humphries, has published a delicious James Russell book called Edward Seago (2014). 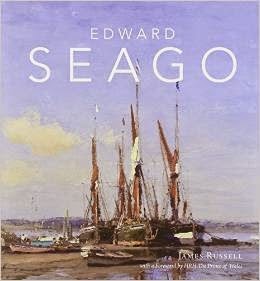 He is not an artist I have heard of but he sounds very interesting and I like his work. What would he have made of the Australian light!

Among the paintings are images of HRH The Duke of Edinburgh painting on the veranda deck of HM Yacht Britannia, storms at sea, icebergs, Port Stanley harbour, Shackleton’s Cross and ice floes.

Taken from The Duke of Edinburgh's private collection, these works have rarely been placed on public view since their first exhibition at St James's Palace in November 1957.

Hello Hels, Thank you for all of this background information about Edward Seago. I first came to admire Seago's work through the blogger Columnist (http://corcol.blogspot.com).

I more and more admire the atmospheric and historic quality of water-landscapes. Here is a post revealing some great detective work done on an Ohio river-scape:
http://www.clevelandareahistory.com/2012/12/more-strange-geography-great-miami.html

But Seago moved around so much. Imagine his cool greens and greys of East Anglian being perfect at home, then imagine Seago finding himself in Italy, Hong Kong, Spain, Burma, Thailand etc etc (not Australia, as far as I know).

thank you. Has a catalogue been published for your exhibition? I would not like to expose myself to cold Antarctic weather, but I would love to see his icy landscapes.

watery landscapes are thrilling to most people because they are so pristine, so calming, so idyllic. Your Ohio images are also calming, but they are very detailed. Seago's images seem almost Impressionistic, in comparison.

Thank you for the reference to The Corinthian Column. I am particularly interested in his post on Sardinia and will chase it up.

Yes, indeed, a great favourite, and now happily an owner of one quite recently acquired, which I saw for the first time a few weeks ago. It is rather unusual, in that it is a much more simple rendition than the majority of his work, (such as the examples you show). As you say, he was prolific, but the quantity does not diminish the attraction for aficionados, or indeed their prices. I was lucky enough to see a rather extensive and good collection held privately by a "Hong" in Hong Kong and of Hong Kong, dovetailing two interests.

You are so fortunate. I used to buy 19th century paintings, but my income stood still and the market moved on :(

Re your seascape. I have only seen dozens of Seago landscapes, not thousands. So I need to ask how typical simple renditions were, in his total oeuvre.

Gosh, can you imagine having the means to live on a yacht for months at a time with valuable painting materials and canvases stowed on-board?

I quite like his work Honfleur was the one place I wanted to visit during our Normandy trip but we ran out of time. Now I definitely want to visit.

there must have been something magical about the Normandy coast, for holiday makers of course but for artists as well. Corot, Millet, Monet, Renoir, Manet, Pissarro, Degas, Caillebotte, Seurat, Signac, Bonnard and Matisse loved those towns.

A Cheffins sale included a collection of sketches, letters, juvenilia and family material relating to Edward Seago via his brother, John.

This northern summer was a proud season for Seago art and history.

I saw one of the paintings he did on his many trips to France, called Summer Afternoon, Tuileries Garden (1951). Edward Seago may well have normally worked within the tradition of British landscape painting but this particular painting seemed to specialise in colour, sunlight and impressionism.

Thank you. I had a look at both "The Champs-Élysées by the Marigny Theatre, Paris" and "Summer Afternoon, Tuileries Garden" both rather small paintings from Seago's post-war career. Although the scenes were crowded with Frenchmen enjoying their leisure hours, I agree it is the light that we notice first.

It occurs to me that if Seago had seen bright colours and a burning summer sun in other landscapists' works, he would probably have been very happy for them. Including the Australian light.

But not for his own work. For his beloved northern scenes, he always returned to the great skies and coasts that he literally saw with his own eyes, in his own home country.