What has Scotland got to do with the development of Australia? Quite a lot, according to the Art Gallery of Ballarat which has mounted a special exhibition to the relationship between Australia and Scotland, right up to Federation (1/1/1901). The exhibition, For Auld Lang Syne: Images of Scottish Australia from First Fleet to Federation, delves into the most important facets of life - fashion, sport, high art and whiskey. 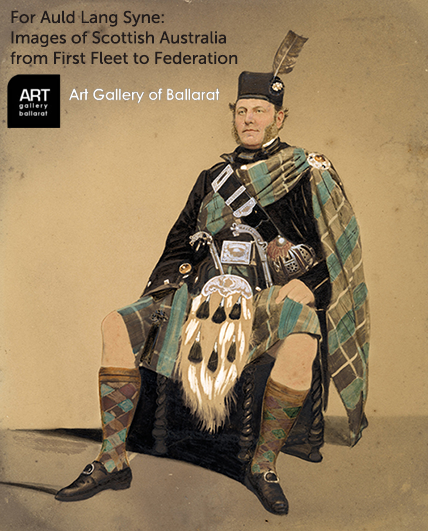 Clearly Australia owes the Scots a lot. The exhibition shows that the first game of golf played in Australia was in Tasmania; Australia’s first Catholic saint Mary Mackillop was a Scottish Gaelic speaker having been taught the language at home in Melbourne in the 1840s by her father and that the wine industry in Australia was founded by the Scot James Busby. Thomas Watling was Australia's first professional artist, a Scot whose paintings beautifully depicted the new colony, its fauna and flora. Alas Watling was a convicted bank note forger and came to Australia involuntarily.

Tough and resourceful, the Scots were more literate and educated than most early settlers in Australia and were less likely to be convicts, so they flourished in their new land. The Scots, with their success­ful estab­lishment of economic and cultural networks, occupied signif­icant posts in the social and political life of the early colon­ies. In particular Scots were prominent among the naval and army officers who ran the NSW penal colony, and they were able to take advantage of generous land grants worked by free convict labour. It is not a coincidence, Patricia Macdonald noted, that three of the early governors hailed from Scotland.

The exhibition brings together artworks and objects from across Aus­tralia and overseas. What I had not expected was a passion for early Aus­tralians to cast their minds to Scottish culture back At Home. When standing next to the Robert Burns statue in the middle of Bal­larat, the guide said that only Queen Victoria was memorialised more than Burns in Australia. And more than that. The poetry and writings of Sir Walter Scott and Robert Burns had a sub­stantial infl­uence of our most famous Australian poets eg Banjo Patterson. 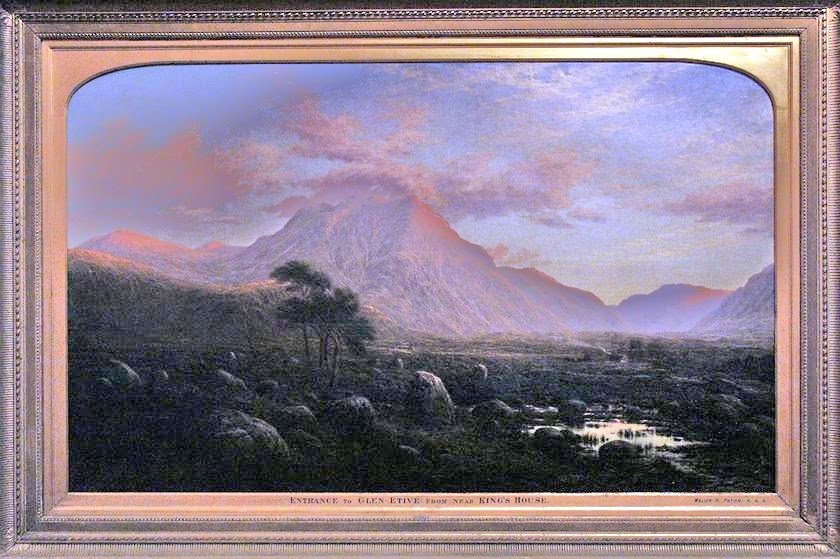 Entrance to Glen Etive from near King's House, 1879
By Waller Paton who migrated from Scotland to Australia.
NGV.

Curated by Dr Alison Inglis and Patricia Tryon Macdonald, the ex­hibition has been advertised as a fresh contribution towards building Australia’s understanding of its extraordinary cultural inheritance. A collection of paintings of wildlife, Aboriginals and views of Sydney by artist and forger Thomas Watling is worth the trip to Ballarat by itself. His paintings have been sitting in the Natural History Museum in London for well over a hundred years and have never been shown in Australia. Macdonald reminded the viewers that as with so much of that wonderful early art, Watling's works all went back to England and we have very little of it here.

In particular I am grateful (as always) for compreh­ensive catalogue that includes essays by leading scholars on aspects of the Scottish presence in Australia. The closing day will be Sunday 27th July 2014.

Visitors to this Ballarat exhibition might also be interested in a Sunday-visit Villa Alba Museum in Melbourne (Kew) which was built by the Edinburgh-born William Greenlaw in c1884. The notable decorations were done by the Scottish-trained Paterson Brothers; they include an eclectic mixture of painted, stencilled and gilded decoration and feature a 40’ painted mural of Edinburgh and a dining room frieze decorated with scenes from Sir Walter Scott’s novels.

Tough and resourceful, the Scots were more literate and educated than most early settlers in Australia and were less likely to be convicts, so they flourished in their new land.

Thomas Watling eventually went home to Scotland, despite succeeding here. I wonder why.

I asked why there were so many examples of Scottish landscape paintings, even though they might have looked slightly out of place in Australian houses. The answer was because the immigrants were so homesick, they reminded themselves of Home whenever they could.

they were great migrants... hard working, more educated, less criminally inclined and often keen to get away from Scotland's difficult times.

The Canadians same the same thing about their Scottish migrants, especially in the Maritime Provinces :)

Watling got very lucky in Australia. Despite being a convict, he was assigned to the surgeon-general, a keen naturalist, who made extensive use of Watling's artistic skill. Then Watling got lucky again. When White left the colony, Watling was re-assigned to the judge-advocate. No chains, no hideous labour gangs. Just success.

He should have stayed in Australia. From 1801-3 he lived in India, then back to Britain where he faded into oblivion.

Hello Hels, This looks like a wonderful exhibition. My favorite joint product of Scottish and Australian cultures is the singer Nellie Melba, née Helen Mitchell.
--Jim

good on you for knowing Dame Nellie Melba's father had been Scottish immigrant. David Mitchell was actually famous in his own right; he built Scots' Church and St Patrick's Cathedral in Melbourne, and the famous Menzies Hotel.