How a British prince became a German duke.. and fought against Britain!

I believed it was impossible to learn accurate hist­ory from a tv programme. Wrong!!! The Channel 4 documentary “Hitler's Favourite Royal” traced the tragic tale of how a member of the British Royal Family was forced against his will into accepting a German dukedom, found himself fighting for the Kaiser in WW1, was deprived of all his British titles and branded a traitor peer. And worse.

When Uncle Alfred died over in Coburg leaving no son, the Queen's 3rd son the Duke of Connaught should have moved to Germany. But Connaught wisely renounced his claims to that distant duchy.

So when Charles Edward was a young schoolboy at Eton, granny Queen Victoria made a decision that was to scar his life. She decreed the British prince would eventually become Duke of Saxe-Coburg and Gotha, the German principality from which her beloved late husband, Prince Albert, had come. This was despite young Prince Charles Edward hating anything German, including the language!

And so it happened. In 1900, at 16, Charles Edward was forced to leave his home and become Carl Eduard, Duke of Saxe-Coburg and Gotha, with 13 castles in Germany and Austria, hunting lodges, endless rich farmland in Bavaria and a very valuable duchy. He became the fourth and last reigning Duke of Saxe-Coburg and Gotha, under the care of a regent. Only when he became an adult in 1905 did Charles Edward assume full constitutional powers. In the same year the Duke married Princess Victoria Adelaide of Schleswig-Holstein and had five children. It was a happy marriage. 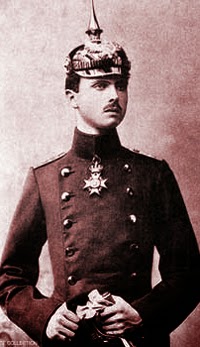 As WW1 started, Charles Edward found himself in a hideous dilemma: fighting for the Kaiser OR for the beloved country of his birth. This caused a terrible conflict of loyalties for the young man, but finally he supported Germany and was given a commission as a general in the German Army. Meanwhile, back in Britain, King George V changed the name of the British Royal House from the “House of Saxe-Coburg and Gotha” to the “House of Windsor”. By 1917 the war against Germany had made King George want to distance his dynasty from its German origins.

It is correct to say that the Duke of Saxe Coburg became a controversial figure in Britain, due to his status as a German general in WWI. But who had originally forced him to become a German royal??? Why did he lose his British titles and his British honours in 1919? Why was King George absolved of his German-ness but Duke Charles Edward was not?

In November 1918, the Workers' and Soldiers' Council of Gotha deposed him and he relinquished his rights to Coburg throne. Thus he was doubly abandoned: branded a traitor and effectively exiled from Brit­ain AND deposed in Germany. Now a private citizen, he now moved to the far right, associating him­self with very nasty right-wing paramilitary and political organisat­ions. I felt sorry for him no longer. He voluntarily joined the Nazi Party in 1935 and rose through the ranks of the SA aka Brownshirts. He also served as a member of the Reichstag representing the Nazi Party from 1937 on, and as president of the German Red Cross from 1933 on. 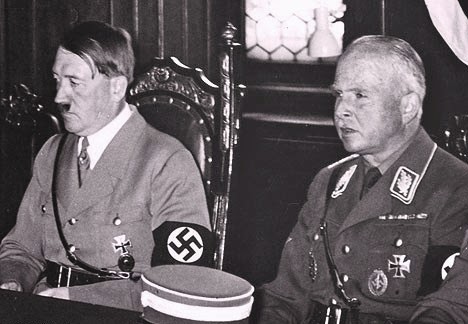 In 1936, Adolf Hitler made Charles Edward president of the Anglo-German Friendship Society, an ambassadorial role in his old country. His mission was to improve Anglo-German relations and to explore the possibility of a pact between the two countries. He attended the funeral of his first cousin King George V in a uniform of a general of the German army (his British uniform having been taken away from him), and sent Hitler encouraging reports about the strength of pro-German sentiment among the British aristocracy.

Charles Edward used his position as president of the newly-formed Anglo-German Fellowship to engineer personal dealings between his cousin, the new pro-German King Edward VIII, and Hitler. Then after the Abdication Crisis, he hosted the the terrible Duke and Duchess of Windsor during their “private” tour of Germany in 1937.

Although Charles Edward was too old to serve himself in WW2, his three sons served in the Wehrmacht. His second son was killed in action in 1943.

When WW2 ended, in the weeks following the death of Hitler and the fall of the Third Reich, a 60-year-old arthritic man was found in a prisoner-of-war camp in Germany. The American Military Government in Bavaria placed Charles Edward and other Nazi officials under house arrest at his main royal property, Veste Coburg. His sister, Princess Alice, travelled from Britain to Germany to plead for Charles Edward’s release.

At his trial, Charles Edward pleaded not guilty. He claimed he had acted honourably, as did the Nazi regime. In 1946, he was sentenced and almost bankrupted. Since Gotha was part of Thuringia, the Soviet Army confiscated much of the family's property in Gotha. Coburg had become part of Bavaria in 1920, and fared a little better.

Now he was a prisoner, ostracised by his royal relations and branded a traitor to his country (which one?) He spent the last years of his life almost in isolation. In 1953, he travelled to a local cinema to watch the Coronation of his beloved cousin's granddaughter, Queen Elizabeth II. He died in Coburg in a small flat in 1954, the last surviving grandson of Queen Victoria. What a dismal life.

The tv series said Quen Victoria regarded her children as ugly, nasty and frog-like and that she just wanted to spend time with her husband, Albert. If she was prepared to sacrifice her own children's happiness, of course she would have easily sacrificed her grandson's happiness.

Hello Hels, I am often surprised how often the British aristocracy supported Nazi Germany--it seems like a combination of treason and suicide to me. Your article points out some of the extra elements of dilemma that affected Charles Albert, but in the end he still supported a regime that was committing unimaginable crimes, and so I cannot feel too much pity for him.

I wonder if in the last part of his life he made any statements to distance himself from Nazi Germany.
--Jim

Queen Victoria only wanted to be with Albert in life, and strengthen his influence after his death. If her beloved Albert had not have come from "Saxe-Coburg and Gotha" in particular, Queen Victoria might have left her grandson alone and not ruined his life.

But then we can also ask why Charles Edward's mother did not try to protect the lad from his overbearing grandmother?

I can understand why the British royals felt a special closeness with their family across Germany, since they were the closest of allies. At least until WW1 when everything changed.

But the closeness of the aristocracy to Nazi Germany before and during WW2 was a totally different story. Sir Oswald Mosley was a member of the aristocracy, as were his two wives. So note the list of ennobled supporters closely connected to the British Union of Fascists!

Queen Victoria's Children tonight was about her four sons. She wrote bitterly about three of the boys, even blaming Bertie for killing his father. Only Prince Arthur seemed to be loved. Do you believe this?

That son, Arthur Duke of Connaught, was the VERY same son in direct line of succession to the Duchy of Saxe-Coburg and Gotha, when his German uncle died in 1899. Arthur was the son who decided to renounce his own and his son's succession rights to the German dukedom.

Queen Victoria must have truly loved Arthur because he was allowed to get on with his own fulfilling life in Canada, India etc.