Henry Hudson was an experienced and busy English seaman. Firstly he had been commissioned by the English merchants in the Muscovy Comp­any in 1607; he was to find a north west passage to China via a route above the Arctic Circle. This would be, if he found it, a quick route from England to the "islands of spicery."

Then Henry Hudson had been hired by the Dutch East India Company to once again find an easy route to Asia. His ship sailed across the uncharted waters he hoped would bring them to Asia, but they came unstuck north of Norway. The crew was not happy and threatened mut­iny, so Hudson wisely decided to go along the tried and tested passage in­stead, a la John Smith and Samuel de Champlain of the New World settle­ments of Jamestown and Quebec.


Imagine the crew's excitement in 1609 when they sailed into the mouth of a large river just off the coast of Cape Cod (Massachusetts). And imagine how delighted they were to find a majestic harbour surround­ed by wide, easily navigable rivers and land rich with natural re­sour­ces. In 1614 the New Netherland Co. was established and they soon created a second fur trading post in Fort Nassau, today called Albany.

Hudson returned to The Nether­lands with the maps and reports; this was followed by a flood of Dutch citizens who flocked to this new land with its wonderful river, now called the Hudson River. 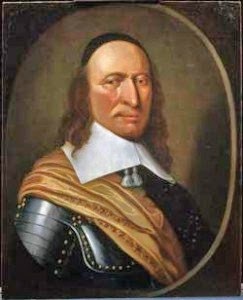 Peter Stuyvesant become the Director-General of the New Netherland colony in 1647.

Who settled the area first - the Dutch or the British? The May­flower was the famous ship that transported British pilgrims from Plymouth England to Plymouth Mass. no earlier than 1620. So we can be clear that the Dutch had already established their own colony in North America 11 years before the Pilgrims even kissed their loved ones goodbye back at home.

Merch­ants from Amsterdam began sending agents to the area to act in their financial interests. These agents collected food, tobacco, fur and timber, sending shiploads back to Amsterdam, which was then Europe’s leading trade city. In order to secure for themselves the rich trade that the new land seemed to promise, the Dutch decided to colonise the area and name it Nieuw Nederlandt. New Netherland was the first Dutch colony in the New World, extending from Delaware to Albany New York and included parts of Maryland, Pennsylvania, Connecticut and New Jersey. Some colonists came for the prospect of owning their own land or to capitalise on the fur trade. Others came as servants or hunters, or to escape religious persecution.

New Netherland was populated mostly by Native Americans, traders and employees of the Dutch East India Company. Eventually, farmers and tradesmen arrived, often with their wives and children. Slaves were brought in from Africa. Soldiers were shipped over to protect the colony. Officials were appointed to govern and maintain order. There were shipbuilders, teachers, millers, butchers, brewers, black­smiths, carpenters and bakers, some Dutch but others from other parts of Western Europe.

The written history of New York City properly began with the Dutch settlement of Walloon families in 1624, when State General Peter Minuit formally bought the island of Manhattan from the Native Americans! That town, at the southern tip of Manhattan, was called Nieuw Amsterdam, and was the main city of the Dutch colony of Nieuw Nederland. To defend New Amsterdam, Minuit built Fort Amsterdam on the water’s edge.

The date 1625 appeared on New York City's corporate seal; the year of Dutch incorporation as a city. And we can track the Dutch origins in many names in New York City today e.g Brooklyn came from Breukelen, Harlem was Haarlem, the Bronx was once Pieter Bronck, Flushing was Vlissingen and Staten Island came from Staaten Eylandt.

In 1646, Peter Stuyvesant was selected by the Dutch East India Co. to become the Director-General of the New Netherland colony. Stuyvesant organised the colonists in projects, draining marshes and dig­ging canals. In September 1647, he appointed an advisory council of nine men as representatives of the colonists on New Amsterdam.

By the mid 17th century, New Amsterdam was doing very well commer­cial­ly. Alas for the Netherlands, their biggest competitor for ship-building and overseas trade were the English who persuaded King Charles II to "give" the successful Dutch colony to his brother, the Duke of York, in 1664.

In the same year, English ships entered the harbour and troops mar­ch­ed to capture the East River to the city, with minimal resistance from the Dutch governor, Peter Stuy­v­esant. The English really wanted Manhattan Island with its fine natural harbour and two impressive rivers. But we still have to ask why Nieuw Amsterdam was ceded by the Dutch to the English so passively?

The best explanation I can find is that after the second Anglo-Dutch Sea War 1665-7, the English agreed to transfer sovereignty of Sur­in­am to the Dutch in The Treaty of Breda in 1667, in exchange for New Amsterdam. Perhaps the coffee and sugar cane plantations of Suriname looked better to the Dutch than the fur trade of northern USA. Or perhaps Peter Stuy­v­esant had made little effort to endear himself to the good burghers of New Amsterdam since he arrived in 1646, so when they were asked to defend the city against a fleet of British warships, the citizens simply refused to risk their lives.

The Dutch had done very well for 50+ years (1609-67), but their idyll was over. The newly English city grew northward, and became the largest city in the colony!

2014 is exactly the 350th anniversary of the year in which the English took over the Dutch colony and called it New York. But the Dutch legacy remains - in holiday traditions, food, place names, architecture and even politics. For detailed information, see New Netherlands Institute, Exploring America's Dutch Heritage.

I've been reading this post while making Anzac biscuits: a representative of another country where English and Dutch interests have mingled in the distant past.
I really enjoyed this post, Hels. I have a book back in Melbourne all about the first hundred or so years of the English holidays. When I am next there I am going to see what it has to say about the relatively passive 'take over'. I will let you know.
From the look of the map, the Dutch were well on the way to making a rather nice city for themselves!
Bye for now,
Kirk

Hi Hels,
What a wonderful post! As a native New Yorker, you sparked lots of memories and that name Henry Hudson is synonymous with my hometown. On the west side of Manhattan you have the Hudson River, the Henry Hudson Highway and there's a very popular high school named after Stuyvesant where author, Frank McCourt taught for years! Thanks for jogging the old memory bank.

Agreed. The more I read about New York, the more names I find that still sound Dutch or are very closely Anglicised versions of the Dutch eg Dutch word for stream is kils, as in Catskill.

The first three Anglo-Dutch Wars (1652-74) were so time consuming and so apparently senseless that I can't make head or tail of them. Except for one fact; these wars were all fought _in Western Europe_.

So why did the English invade the Dutch colony of New Netherland _in America_ in June 1664? And why did the Dutch respond by sending a fleet that took back their Surinam trading posts from the English?

My late aunt and uncle and their family lived in New York so it was a city I visited often. And loved.

But as you locals always knew, there is far more to New York's history than the Statue of Liberty, the Metropolitan Museum of Art, MoMA and the Empire State Building. Now the tours will have to start in 1609, not 1850.

Excuse me now. I am going to ring Qantas and book my ticket :)

Hello Hels, As one who is interested in American architecture, I am constantly reading about the Dutch-settled cities in the Hudson River Valley. Not only are the place names Dutch, but also there are many Dutch-inspired buildings. The later architectural history of the area is also very rich, as many of the finest Colonial and 19th Century houses in America were built there.
--Jim

Until 6 months ago, I didn't even know about the Dutch-settled cities in the Hudson River Valley. I am now finding The New Netherlands Institute interesting reading.

Your reference to those settlements raises an interesting question about the early architecture. After the British took over the area, why were they happy to both retain original Dutch architecture and emulate it in their own houses? Clearly they didn't see the Dutch as their enemy.

Hello again, I am sure that there have been dissertations written specifying the spread of Dutch architecture in the U.S., but the basic answer to your question is Yes. Many features, such as Dutch doors (in which the top half opens separate from the bottom), Dutch (stepped) gables, and Dutch (gambrel) roofs, remained common, and even today builders often supply Dutch Colonial models.
--Jim

exactly so. I am well used to finding projects by Dutch engineers, canal buildings, town planners and architects who were commissioned by cities outside the Netherlands. These 17th century professionals must have been Amsterdam's major export.

The difference with towns in the Hudson River Valley is that they didn't invite Dutch engineers to tell them how to build their buildings and towns. Whereas in Russia, I suspect that at one stage there was more Dutch being spoken in Saint Petersburg than Russian. I love this topic :)