I love 17th and C18th art that made commentary on social issues in the communities where the artists lived. William Hogarth (1697-1764), for example, documented the seamy side of life in England, firing off his artistic bullets against corrupt politic­ians, negligent mothers, sleazy men who seduced gullible young women and alcoholics. In his satir­es, he swore that the political and social references were real but that the faces did not refer to anyone in particular.

Even the well heeled gentlemen in their private club (see the painting A Midnight Modern Conversation below) were falling apart under the influence of alcohol. Hogarth was not displaying the “imperturbable grace and goodness of an England built on land and trade”, but more subversively the vomit-inducing excess of a nation addicted to booze.

Pieter Brueghel the Younger (1565-1638), born in Brussels and educated in Antwerp, was not known as a satirist and political commentator. So what do we make of his painting The Village Lawyer, painted in 1615? According to the European Fine Art Fair notes, the village lawyer was depicted as smugly reading petitions in his chaotic office. In the meantime, the peasants were queuing up to pay their fees with farm produce in lieu of cold, hard cash. 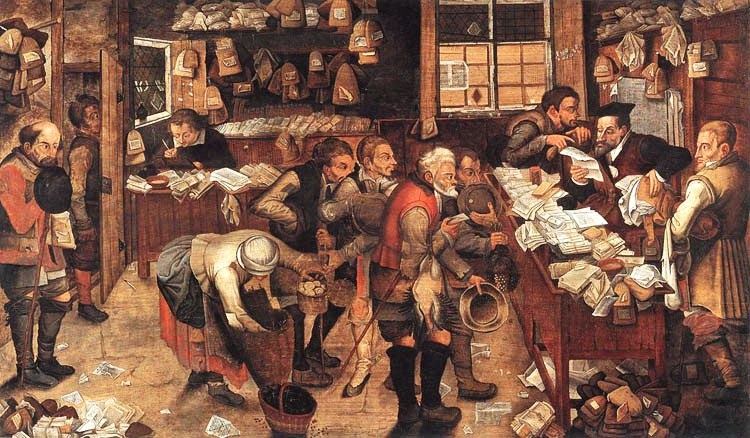 But I am not sure that the lawyer was smug or that the peasants were serviced perfunctorily. The scribe in the background was depicted as working very hard on the tasks set by the lawyer, and the peasants seemed respectful and patient. What was needed more than anything in this lawyer's office was an efficient filing system for the masses of papers on the floor, the desk, up on the shelves and tucked into the eaves.

One last thought. Pieter Brueghel II's genre paintings of peasants may well have lacked his father's (Pieter Brueghel I) subtlety and humanism, but perhaps the son emphasised the picturesque on purpose. The moral message of The Village Lawyer could be that it does indeed display the oafish simplicity of the Flemish peasantry, but not out of the artist's sense of elitism. Perhaps the artist both loved his peasant friends and recognised their limitations.

Who were these village lawyers? In Europe the first univerties in Italy, France and England gave students the choice of arts, canon and civil law, medicine and theology. And we know that Law only became a formal profession with clear educational require­ments by the 13th and 14th centuries, and probably later.

Canon lawyers served the church and were not often seen by ordinary citizens.

But civil law was the stuff of everyday life – the writing and execution of wills; conveyancing i.e the drafting of documents for property transactions; labour and other contracts; and defending people charged with petty and more serious crimes. Civil-law notaries drafted and recorded legal instruments for private parties, provided legal advice and gave attendance in person, usually on a fee-for-service basis. Every citizen would have needed, at some time during their life, access to a local lawyer. So men working in civil law would almost always be amongst the elite of the town’s population, educated, well paid and living in decent housing.

One imagines that a village lawyer did not need a PhD to sort out many of the disputes in the manor courts that had to do with farming and prop­erty, and small crimes like assault, petty theft, public drunkenness. Perhaps Brueghel’s lawyer found it was boring and repetitive work. Perhaps this lawyer did not like the smell of the Great Unwashed. 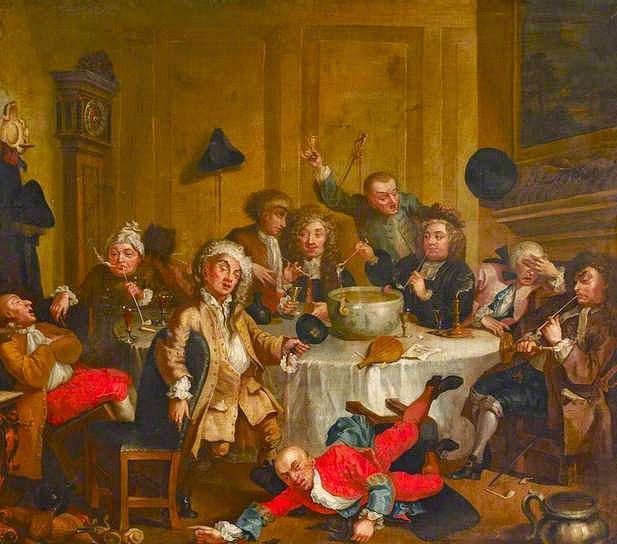 Hogarth is a favourite of ours. There is always so much to see in his pictures and his ability to characterise the subjects of his paintings is impressive.

The Soane museum in London has a particularly fine collection of Hogarths in the basement. They fill the walls, teeming with the life and vitality, corruption and sleaziness of the London of the day.

Your comparison with the Breughel is most apposite.

My legal friends in suburban practices still say the same thing today. Petty crimes, wills, coveyancing and contracts. After a few years, they can do those legal jobs in their sleep.

That's so interesting to look back now, and realize how and why those artists came about choosing and painting their subjects. I really like the piece and have never seen that one before. It's almost like Breughel was an illustrator of the life and times he lived in, similar to what artists like Norman Rockwell did.

Hello Hels, I don't think that it is very easy to interpret this painting, but one should definitely avoid the mistake of falling into stereotypes of lawyers. It does seem odd that so much produce is being collected, but we also see the large piles of paper work, so the lawyer is definitely earning his fees.

Perhaps the clue is in the expressions of the clients, many of whom appear angry and determined. Brueghel might be commenting that these litigious peasants are wasting their income to prosecute minor disagreements that could have been settled under the old rules of simply getting along.
--Jim

Hogarth was brilliant, agreed. And his printed works did very well, so there must have been enough people who loved him depicting the vitality, corruption and sleaziness of London back then.

Gin soaked mothers, yes. But politicians, aristocrats and merchants? How did he get away with it?

nothing much changes, does it. I cannot imagine that village lawyers of 1615 or suburban solicitors of 2014 did/do heroic, monumental tasks. Most of their work would be routine.

*nod* Both Brueghel and Hogarth were very clever illustrators of the life and times they lived in. But there was the risk.

Every artist had to ask himself which market he was going for. Being commissioned to do the Big Three (religious art, history paintings or aristocratic portraits) was a path to sure financial success. Otherwise, if an artist wanted to do something else, there was no guarantee of being able to earn a living from art.

there was already a busy civil service, but it ran the royal mint, courts, army, the diplomatic service, census etc. The cool part of Brueghel's village lawyer was that he was serving ordinary people.

I think you have raised something interesting here - if there was ambiguity in this scene, Brueghel did it on purpose. Compare this to the Hogarth image where there was no absolutely no ambiguity.