Edward Joseph Leonski (1917–1942) was the 6th child in a Polish-American family in New Jersey. Leonski grew up with a manic depressive mot­her and an alcoholic father, two brothers with prison records and a third in a psychiatric hospital permanently. A psychologist said Mrs Leonski had been cont­rol­ling, Mr Leonski was an absentee father and Eddie had been bullied by the children at school.

But then why was Leonski accepted in the American army in February 1941? If he was psychotic and violent, he should have been rejected on mental health grounds. If he was nonetheless accepted by the American army, he should not have been sent overseas. The American Army certainly knew what they had on their hands. This young soldier had attempted to strangle a woman in San Antonio Texas. He was caught and charged with assault.

Yet…yet… Private Leonski arrived in Melbourne in Feb 1942. Almost immediately “ferocious” drunkenness led to thirty days in the American army stockade but he eventually was allowed back on the Melbourne streets. 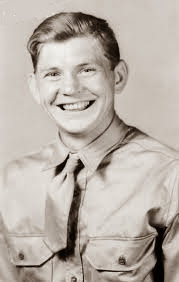 Three female civilians were found murdered in Melbourne in May 1942. Ivy McLeod (aged 40) was beaten to a pulp and strangled in inner city Albert Park. Pauline Thompson (aged 31) went to the American Hospit­ality Club where she met friends for a dance. Her strangled body was found the next morning in Spring Street in the city. Gladys Hosking (aged 40) was going home from her job at Melbourne University and a few hours later her body was found near Camp Pell in inner city Park­ville. All three were throttled; all were older than the killer; and, though their genitals were exposed, none had been raped.

Several other women came forward to say that they had been attacked by an American serviceman in May 1942, but had avoided death by sheer fluke. That made Melbourne women feel even more vulnerable and afraid of walking in their own streets.

Great numbers of American servicemen at Camp Pell were lined up by the Melbourne police so that witnesses could identify the murderer. Edward Leonski of the 52nd Signal Battalion was eventually identified by some of the women who had survived Leonski’s murderous plans. Leonski was a heavy drinking, fun-loving soldier who just wanted to meet local women. But he eventually confessed to the crimes, saying he killed the women because he was fascinated with female singing voices. He soon became known as the Brownout Strangler, presumably because he could easily stalk and kill women in the shadowy streets; Melbourne kept public lighting at a low level throughout the 5.5 years of WW2.

24 year old Leonski of the 52nd Signal Battalion was arrested and charged with three murders. Although his crimes were committed on Australian soil against Aust­ralian civilians, Leonski was court marshalled by an American milit­ary court, using American military law. It was the first time that any person has ever been tried in this country by a military tribunal for a crime against civilians.

Following some dispute, he was declared sane. Nonetheless in the court case, evidence of Leonski’s alcohol-induced psychosis was given. Dual personalities, alter egos, voice changes, poltergeists, werewolves and demons were all described in detail. He personally gave no explanation for his crimes, other than to say that he wanted a woman’s voice. So he took it.. by choking each female victim. 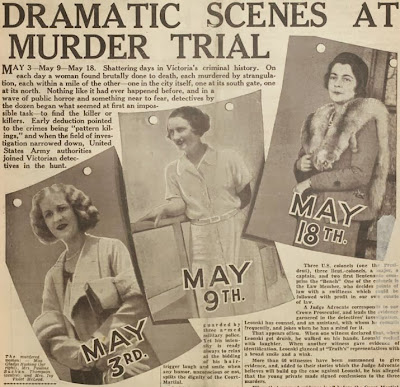 Article re the strangulation murder of three Melbourne women.
The Truth newspaper, 18/7/1942

Leonski was buried in an unmarked site in a Melbourne cemetery, given that many Australian husbands wanted to grab his body and throw it to the dingoes. In May 1945, his body was removed to the USAF Cemetery in Ipswich in Queensland. In 1947, Leonski's body was sent to America where it was buried on the island of O'ahu in Hawaii.

Even back in 1942, controversy reigned. Sensitive to relations with its American ally who had so recently joined the war effort, the Curtin government decided, after consultation with Britain and in the face of some strenuous opposition, that Leonski could be tried by a United States court martial. You can read the endless newspaper debates in the then-newspaper of record in Melbourne, The Argus, on the following dates: 4th, 11th-15th, 20th-29th of May, and the 14th-15th and 17th-18th of July 1942.

But questions still remain in 2014. What was the American Army thinking, accepting a clearly disturbed young man whose goal it was to get blind drunk and strangle women? Why were no charges made under Aust­ralian law, once all the murders and attempted murders happened in Melbourne? How could the Prime Minister John Curtin allow the Americans to use a military tribunal to prosecute breaches of civil law? How did the Australian legal and penal authorities allow capital punishment for a man who, the psychiatric evidence suggested,  was not responsible for his own actions?

Well fleshed out. It also seems odd that he was court martialed but then the sentence carried out by our civilian justice system. I think if anything like that was attempted now, the matter would be in court for years.

Hels, what a horrifying story this is. As you say, the army should have seen this coming, but perhaps they attributed the first attack to a drunken soldier on leave, and likely they hoped that all that aggression would be used against the enemy--but they should have monitored him a lot closer.

It's amazing that the Australian legal system was prepared to let the US Military try Leonski. I don't think that would apply today, but I suppose we are not in war conditons.

On the Battle of Brisbane, which is one of the fascinating stories of WWII, I did a piece on it some time ago that others may find interesting:
http://www.yourbrisbanepastandpresent.com/2009/11/corner-of-creek-adelaide-sts.html
Thanks for the link.

I was almost not going to mention the Battle of Brisbane since it did not exacerbate the crisis in Melbourne. However, as you noted, an early skirmish in Albert St escalated into a violent, full-blown riot later that day. Reports say that 2000+ Australians tried to storm the PX in pursuit of some American servicemen.

Thanks for the excellent link.

If the prosecution of Eddie Leonski went ahead now, he would have had psychiatrists saying the man was clearly psychotic. I know it was war time and everyone was petrified, but we are a civilised nation. What was our prime minister thinking?

exactly so. The American army was so keen to recruit any man who looked young and fit, they overlooked Leonski's very serious history. Red flags should have been alerting the military authorities.

ExecutedToday.com reported three more Melbourne women Leonski tried to murder but failed to complete the task. Leonski must have been a very busy man at that time.

What a name for a blog...Executed Today :)

Even if he did _only_ three murders and three attempted murders in May 1942, Leonski was a very busy man indeed. He had to plan ahead to go to a dance, get drunk, select a target woman, chat her up all evening, walk her home, then attempt/manage to strangle her. 31 days and 6 massive strangulation efforts = one every five days.

I wonder if there were other women in Melbourne who never reported attempted strangulation cases to the police.

February 1942, the Japanese had swarmed Singapore, forcing Britain into a humiliating surrender. Thousands of Australian men were captured as POWs, the whole 8th Division to name one.

The nation was stunned, they had lost their virginity as Singapore had been touted as an "Impregnable Fortress". Nice bit of propaganda there.

My mother and her sisters were living in Richmond & Albert Park when Pte. Leonski was one of a jillion GIs who were at the barracks in Royal Park (across the road from Royal Park Psych).

With a very real threat of Australia being invaded by the Japanese - one little ol' drunken soldier who had been trained to kill, was the least of the problems facing the WHOLE of Australia.

Two of the women Pte Leonski killed were friends of my mother & aunties.

Rain In The Face

thanks for commenting on the post. I disagree that "one little ol' drunken soldier who had been trained to kill, was the least of the problems facing the WHOLE of Australia".

Between May and July 1942, the then-unknown murderer of women utterly changed life for women in Melbourne. At the end of each day, workers were not allowed to leave their factories and shops alone. Girls were kept inside their high schools until one parent arrived to pick them up.

Of course they were not the only 3 successful murders and 3 failed murders that Australian women had ever suffered. But it was the first time that any person has ever been tried in this country by a military tribunal for a crime against civilians. An extraordinary series of events!