Night Train to Lisbon is a 2013 drama film directed by Bille August and starring Jeremy Irons as Raimund Gregorius. Based on the German novel Night Train to Lisbon by Pascal Mercier, the film is about a Swiss high school teacher late in his career who accidentally saved the life of a young suicidal Portuguese woman in Bern. Again by accident, he abandoned his classroom and jumped on a train to Lisbon, leaving his teaching career in abeyance and searching for people who participated in rec­ent Portuguese history. All his actions were guided by a small but powerfully written book that he accidentally found in the Portuguese woman’s coat pocket!

All the film reviews I have read concern themselves with the change in Gregorius’ character, from a proper, reticent, depressed, deserted husband to an actively involved and passionate researcher. But these reviews miss the point. He did indeed run from lead to lead to lead, but not trying to discover himself! Rather he was interested in the fate of the young author of the book, one Amadeu do Prado. As it turned out, do Prado was a doctor and writer who fought against Fascist Portuguese dictator, Antonio de Oliveira Salazar, prime minister from 1932 to 1968. Some of the best information about do Prado came from his old teacher and priest, played by Christopher Lee, and from another resistance fighter played by Tom Courtney. 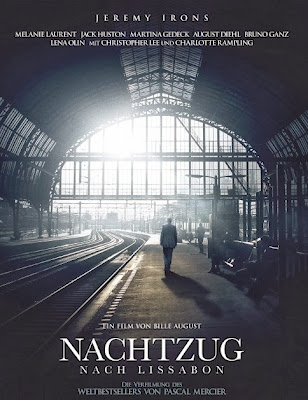 Raimund Gregorius goes off into the night, uncertain of what he is looking for and what he might find.

For a medical man and a freedom fighter, do Prado’s greatest impact on the world was via his abiding love of literature! Fort­una­t­ely he wrote everything down by hand in exercise books, even during the terrible days. And luckily his very strange sister Adriana (Charlotte Rampling) later edited and published the writings. His life, philosoph­ies and dilemmas showed great awareness of Salazar’s dictatorship, power of the Catholic church, his dominant right wing father, his and others’ sex lives, the role of brotherhood and the future of Portuguese society. But since no-one in the Resistance had ever known who to trust, uncertainty was the overriding theme in do Prado’s story.

The crux of the film was the era when Salazar dep­ended on the secret police, PIDE. PIDE had actually been established before the war and was modelled on the Gestapo, but events in the film did not take place until the mid-late 1960s. This was presum­ably when the secret police most brutally repressed political freedoms, in order to eliminate the regime's political opponents, socialists and intellectuals. Salazar may have looked like the elegant lawyer that he was, but he was a cruel and violent dictator.

As it happens, my husband and I left Australia in Dec 1970 to live in Europe, and so we were very aware of the events depicted in the film. And even though Spain’s Fascist control seemed more explicit and worrying (to us outsiders) than its Iberian neighbour, 43 years later I still identified strongly with the Portug­uese protagonists during the film. Did it matter that by that time, Salazar had become incapacitated and Marelo Caetano was prime minister from Sep 1968–April 1974? Probably not. Caetano may have hoped to ameliorate Salazar's authoritarian dictatorship somewhat, but the dreaded secret police continued to rule with terror.

Inevitably there was a popular (Carnation) revolution in 1974, followed by the restoration of full parliamentary democracy. In the meantime, however, Portugal had become one of the poorest and most scary countries in Europe.

It was noteworthy that the older characters in the film, once brave young resistance fighters in the 1960s, were still maintaining their silence about their involvement 55 years later. Do they think Portugal’s government, church and military might go Fascist again in the near future? Is there still an ambivalence in Portugal about how brilliant or how dastardly the Salazar years were? 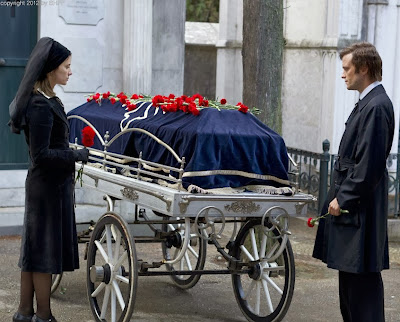 The funeral of one of the very young resistance fighters, Dr Amadeu do Prado
Lisbon, late 1960s

Thank you for sharing your review!
I loved the book, but have not yet watched the movie.

Are you familiar with "The Inquisitors' Manual" by Antono Lobo Antunes or "Requiem: A Hallucination" by Antonio Tabucchi?

I am not familiar with either Antunes or Tabucchi, but I use the bloggy-world to gather recommendations for both novels and history references. Many thanks.

If you see the film with German subtitles, your pleasure won't be reduced. But imagine the surreal quality of watching German speakers speaking accented English to each other ....then translating into proper German on the screen :)

Portugal is the Biggest Racist country that i have ever lived in. I feared for my life there and i consider myself lucky that my family got out alive! I have never lived in such poverty (Sopas dos Pobres everyday) 40% unemployment rate and 60% of the population earn less than $932 USD per month, and that's considered Middle Class here! Within the European Union it is the worst of the worst place to live.

The bottom line is the bulk of the People in our poor country exist in a brainless comma that is fed by Ignorance, anti-Spanish hate, and severe Racism of pretty much everybody that isn't Portuguese! And, Portugal started the Global Slave Trade in 1441 so it is definitely NOT a safe place for Blacks!!

I found important websites that explain the Severe multi-generational Racism and Hate that exist in Portugal today, and i highly encourage all to read them and spread the word in order to avoid innocent, and desperate people from living or visiting there. Get educated on the Truths about Racist Portugal now.

many thanks for the references. Portugal did not have a proud history of democracy in the long mid 20th century, did it. Do you think it is worse now?