On 24/4/2010, I wrote a post about the American Varian Fry: hero and rescuer of thousands. Varian Fry (1907–67) was a journalist. While working as a foreign correspondent for an American paper, Fry visited Berlin in 1935 and was very distressed by Nazi violence against Jewish citizens.

He went to Marseilles as an agent of the newly formed Emergency Rescue Committee, in an effort to help persons wishing to flee the Nazis. At first Fry only had a rather small pot of money and a short list of refugees under imminent threat of arrest by the Gestapo. But soon anti-Nazi writers, avant-garde artists and musicians were begging for his help.

Despite the pro-Nazi Vichy regime, Fry and his small group of volunteers hid refugees in a safe home until they could be smuggled out. 2,200 people were taken across the border to the safety of neutral Portugal from which they made their way to the USA. Others he helped escape on ships leaving Marseilles for the French colony of Martinique. He was an absolute hero, a truly moral man who became the first American ever to be recognised as a Righteous Among the Nations in Jerusalem.

A year and a half later, on 2/9/2011, I was writing about a totally different continent and a totally different era: Machu Picchu in Peru - luxury exploration. Hiram Bingham III (1875–1956) was the American explorer who revealed the remains of the Inca citadel, Machu Picchu, in July 1911. He had traced Simon Bolivar’s footsteps, including the historic trade routes through Venezuela, Columbia, Peru, Bolivia and Argentina, funded largely by his wife, an heiress to the Tiffany jewellery fortune.
* 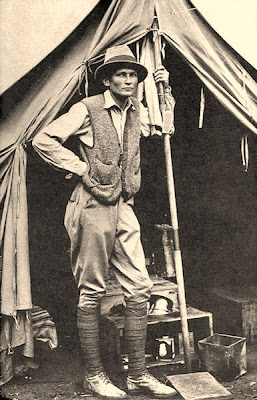 Machu Picchu, the Lost City of the Incas, is one of the most famous examples of Inca architecture and is located 112km from Cuzco, 2,350 ms above sea level. The ruins, probably built in the mid-C15th by the Inca Emperor, are surrounded by lush jungle. The ruins are situated on the eastern slope of Machu Picchu in two separate areas - agricultural and urban. The latter includes the civil sector (dwellings, canals and sophisticated irrigation systems) and the sacred sector (temples, mausoleums, squares and royal houses). The Machu Picchu citadel combines stunning natural scenery with a historic treasure trove, and is now recognised as one of the New 7 Wonders of the World.

Hiram Bingham III has often been cited as a possible model for the Indiana Jones character. His book Lost City of the Incas became a bestseller upon its publication in 1948.

What did these two apparently disparate history posts have in common? The Bingham name! The most important task for Varian Fry was obtaining the visas needed for the artists, writers and academics. He could not have succeeded without Hiram Bingham IV (1903-1988), an American Vice Consul in Marseilles who fought against US State Department anti-Semitism. Like the Japanese consul in Lithuania, Chiune Sugihara, Bingham was personally responsible for issuing thousands of legal and illegal visas.

As it turned out, the Hiram Bingham who was the American vice-consul in Marseilles was the son of the discoverer of Machu Picchu. Though young Bingham has also been singled out for his help to artist Marc Chagall, Nobel prize winner Otto Meyerhoff and writer Lion Feuchtwanger, it was probably even more impressive that he provided assistance to a number of obscure refugees who would have otherwise been doomed.

The Varian Fry Institute has proposed to Israel's Holocaust memorial Yad Vashem that Hiram Bingham IV be honoured as a Righteous Among the Nations. The Institute also nominated five other colleagues who were working in Marseilles until 1941 of whom I shall mention only one.

Charles Fernley Fawcett also worked with Varian Fry. Fawcett was the groom in a series of six bigamous and bogus marriages, helping six Jewish women to get out of internment camps where they too faced certain death. Another truly moral hero of our times.

Great family and if I remember rightly Bingham I and II worked in Hawaii and did some good work there. What exceptional people.

Thank you for raising the legacy of Hiram Bingham I and II. Whatever we think of European, Christian colonisation of small countries, there was something very special about this family. Missionary work, education and literacy, authoring of important books, translations etc etc etc. All done in presumably tough conditions.

I have to ignore my own prejudices of missionaries and recognise that some of them did a lot of good work in health and social issues. This family obviously had real ethic of service for others.

Hello Helen:
What an extraordinary connection. The Bingham family was certainly a force for good.They showed great courage and moral strength at a time when it would definitely have been easier to have kept a low profile. What a wonderfully uplifting tale!

of the 6 billion people on this earth, what is the chance of writing two _totally_ unrelated posts about the one family?

It was a totally uplifting tale alright. I thought the Binghams were a terrific family and that I was a lucky blogger :)

Wow - great stories. Ar there any American families that hold the quest for foreign aid and adventure over generations? It seems like we just grow up trying NOT to be like our parents.

thank you. The funny thing is that I spend my working and blogging hours in European and British Empire history, and don't have any expertise in American history. But I do know that history is not bunkum anywhere in the world.

I have a 3 generational theory about taste. We loathe what we grew up with (in clothes, art, furniture etc) and throw out everything our parents gathered. We are neutral about our grandparents' collecting passions. We would adore our great grandparents' treasures, but they were dispersed decades ago.

Pity he could not have married more....

you are spot on. If only embassies and consulates all over Europe had tried to help people escape and live.

The Australian rep to the Evian Conference of July 1938 was a Cabinet Minister showed the negative attitudes taken by most free nations. He said: “Under the circumstances Australia cannot do more. Undue privileges cannot be given to one particular class of non-British subjects without injustice to others. It will no doubt be appreciated also that, as we have no real racial problem, we are not desirous of importing one.”

You can still hear the gates slamming shut.

Nice post and i really inspired your blog articles and really its very informative stuff and i think its help me in future for my studies prospects.
Thanks

Terrorism
my pleasure :) Are you planning your future studies in history?

Thank you, Hels, for another fascinating post. I read a book about Varian Fry last year but I didn't know much about the Binghams. Fry had to do his work in great danger, but at one stage he and his helpers lived a quite Bohemian life which was very creative as well.

I had mentioned Hiram Bingham IV only in passing in the Varian Fry story. Fry was the hero of the moment, as many famous emigrees to the USA readily acknowledged. It was only reading about Hiram Bingham III that made me think about the values that one strong man passed onto his son, another strong man.

Quite a Bohemian life indeed! Fry mixed with the likes of André Breton, Max Ernst, Victor Serge, Marc Chagall, Hannah Arendt, Victor Brauner, Marcel Duchamp, Jacques Lipchitz, Lion Feuchtwanger, Franz Werfel, Alma Mahler Gropius Werfel and Peggy Guggenheim. If you had a chance at picking when and where you wanted to live, 1930s Paris/Berlin would be the place.