As I suggested in the history of Ballarat, Jewish migrants came to Australia in response to the Gold Rush in the 1850s, where they largely acted as shopkeepers and traders. Thus there were Jewish communities in remote gold rush cities, including Broken Hill (NSW), Bendigo and Ballarat (Vic), Kalgoorlie and Koolgardie (WA).

Broken Hill Proprietary Company (BHP) was the huge mining company that ran the town of Broken Hill for its 27,000 citizens at the turn of the new century. 1100 ks west of Sydney, this outback city could not have been more isolated from the urban centres of Australia, nor more remote from the centres of Jewish learning. From Broken Hill, Sydney is 1,167 kms, Melbourne 817 kms and Adelaide 506 kms. Yet Jewish migrants were attracted to Broken Hill, presumably because employment was always available and small businesses always had a ready market with the mining families. 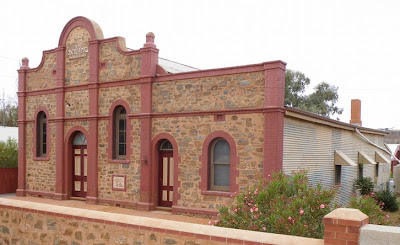 Some early evidence of the community comes from the tombstones. The first Jewish burials in Broken Hill’s cemetery occurred when a typhoid epidemic hit the town in 1888. Other gravestones tell of how the young son of Rebecca and Isaac Joseph died in 1892, and how Louis Dias was killed in the mines by a runaway cart in 1895.

The Broken Hill Jewish community was formally inaugurated in 1900, but as there was no special building available, religious services were held in the Masonic Hall. The first minister, the Rev Zalel Mandelbaum from Minsk, was appointed in 1905.

The foundation stone for the synagogue in Wolfram Street was dated 1910, at a time when the Jewish population of Broken Hill was c150. The façade was roughcast stone brick, but the rest of the building was corrugated iron, a typically Australian material. Next to the synagogue there was a house for the minister and his family, the place where Sunday school classes were held. 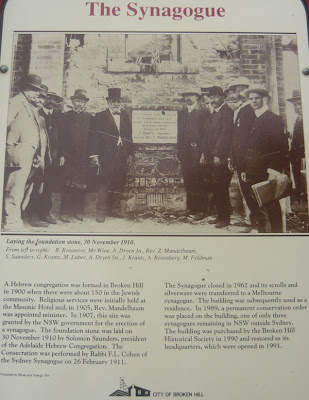 Broken Hill's great days were in the 1920s and 30s, but WW2 was the beginning of the end of this impressive community. All young male citizens went into the army, the mines were closing and the remaining Jewish congregation was thinking of moving to Melbourne or Sydney. In 1962 the synagogue was permanently closed, with fittings given away to a Melbourne congregation. The last senior citizens of Broken Hill’s synagogue, too elderly to move once again, eventually died and were buried in the Jewish section of the local cemetery.

The synagogue building has been heritage listed and in 2004 it was taken over and restored, without its fittings, by the Broken Hill Historical Society. To celebrate the centenary of the synagogue in November 2010, a programme of historical talks and personal reminiscences about the Jews of Broken Hill and their contribution to the town was organised. They also arranged a bus tour of places where Jews had lived and worked, a walking tour of the Jewish section of the cemetery, and a tour to the Miners’ Memorial Arch. 200 ex-members of the town, or their children, gathered in the restored synagogue. 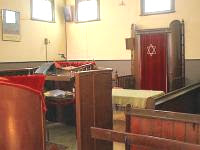 During the weekend, the visitors viewed the exhibition prepared for the Broken Hill Art Gallery. This was where the book, Jews of the Outback: The Centenary of the Broken Hill Synagogue 1910-2010, was launched by Professor Colin Tatz. He spoke about the issues relevant to a rural city: migration, family life, isolation, hard labour and assimilation – key elements that had been so well illustrated in this particular community. 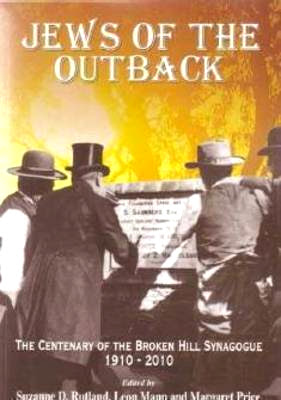 The book Jews of the Outback was edited by Suzanne Rutland, Leon Mann and Margaret Price, and published by Hybrid Publishers in 2010 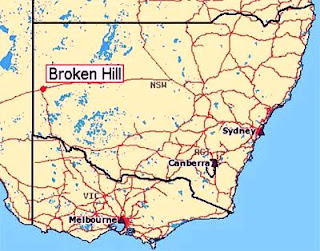 See a map of the SE corner of Australia, to understand just how remote Broken Hill is from the State and Federal capitals.

I am often in Sydney (because my beloved went to school and uni in Sydney) but I never get much further west than the Blue Mountains. Broken Hill seemed very remote indeed. But worth the trip!

Very good post Helen. Just as an aside looking at the town,the Royal Exchange Hotel looks like a rather wonderful art Deco remnant.

Kol hakavod to those Jews.

Your reference is absolutely correct - several of the gold rush listed historic buildings, which make Broken Hill a living museum include the Royal Exchange Hotel, the red-brick Post Office, the ornate town hall and the court house. All were built in the late 1800s.

Broken Hill was never a large city, not during the gold rushes and not now. But they certainly built fine architecture.

indeed! They were pioneering people, made of tough stuff. Broken Hill was remote, dry and had none of the facilities that Eastern Euopean immigrants would have hoped for.

We toured the cemetery in a mini bus and the Jewish section was pointed out to us. I was a bit surprised that there were Jewish people in BH.

I also found walking and touring in a mini bus throughout small rural cities to be the best way to get to know the place. Huge tourist groups in huge buses don't get to see the ins and outs of each heritage site.

How amazing! It's not something that we associate on first thought: Jews and the Outback, but of course, why not? As an enterprising people who made the most of all opportunities, it makes sense!
Glad this history is being investigated and recorded!

When people left central Europe and Russia in a hurry, I assume they took jobs wherever in Australia they could get work. My grandfather worked as an optician in Gippsland, and only got home to Melbourne every Friday afternoon, in time for Sabbath.

It is amazing what people will do to raise their children well. The book is a great analysis of one such (unlikely) option - Broken Hill.

NSW Labor Shadow Arts Minister Walt Secord has called on NSW Premier Gladys Berejiklian and Arts Minister Don Harwin to provide urgent funding to help preserve the historic Broken Hill Synagogue and Broken Hill Mosque in remote far western NSW. Mr Secord made the call after a recent visit to the region and as part of his ongoing interest in Jewish and Muslim sites.

The Broken Hill Historical Society which oversees the historic Broken Hill Synagogue says the 107 year-old building needs about $140,000 in repairs due to a recent hailstorm – especially the roof. If the repairs are not undertaken, it would undermine all of the previous restoration work at the shule.

It is a modest but beautiful synagogue – and the museum has the honour of being the most remote Jewish museums in the world. While the Synagogue closed in 1962 and the scrolls were transferred to Melbourne, the ark, bimah and pews remain in place. It shows that Australia once had thriving Jewish communities outside the major capital cities and in far-flung places like Broken Hill.

Thank you. NSW has had utterly shocking weather this year, but I would not have known of its impact on the Broken Hill religious sites. Hopefully the Arts Minister will ensure these historical sites are protected.