Because the Nizams were a ruling Moghul family in Hyderabad who had not fought in the first Indian War of Independence, they were given special privileges by the British. Thus although Hyderabad was just one of the princely states of British India, it was allowed to retain control of its internal affairs. This worked out well for the Nizams - they ruled their state as a inherited monarchy for 223 years (1724-1947), until Indian independence. 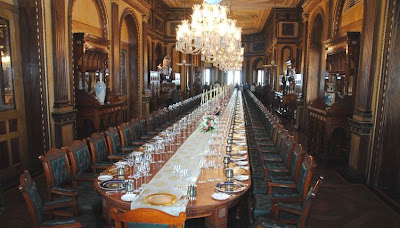 Falaknuma dining table - longest in the world?
As befitted a wealthy, cultivated royal family, the Nizams aspired to be important patrons of the arts. Their stunning and indecently expensive architecture, pearls, diamonds, furniture, art works, jade, carriages and cars came from various cultural traditions - often European, blended with Hindu and Islamic tastes. Of their ten palaces, one was more beautiful than the next.

Nawab Vikar-ul-Umra, the Prime Minister of Hyderabad, started building Falaknuma Palace in 1884, choosing to use an English architect. He completed the giant task within 9 years. Alas he couldn’t pay all the costs, so by 1898 the palace had to became the home of his nephew, the 6th Nizam Nawab Mahboob Ali Khan. His family used and loved the palace until after the end of WW2.

Falaknuma Palace was, since the beginning, filled with Italian marble, stained glass windows and Venetian chandeliers in its 220 rooms and 22 halls. When an important hotel chain started renovating and restoring the palace in 2000, they wanted to preserve the taste of the Nizams wherever possible in the new hotel. The rooms and halls were decorated, as of old, with ornate furniture, rich handcrafted tapestries and brocades. They retained 40 huge Venetian chandeliers and intricate frescos, paintings and statues. 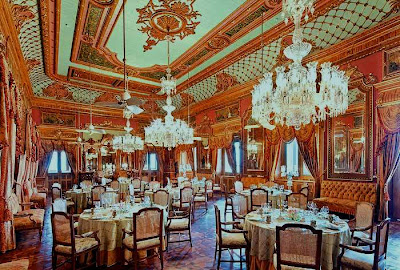 Falaknuma Durbar Hall
The old palace opened as a hotel in November 2010. As the Taj Hotel’s history page reports,  the palace library is home to the rarest of manuscripts and books, selected and brought back by the Nizam himself. Its walnut carved roof was designed to imitate the one at Windsor Castle. A marbled staircase still takes guests to the upper floor, complete with balustrades, marble figurines holding candelabras and an historical picture gallery along the staircase walls.

Although spouse and I always stay in university digs or cheap bed-and-breakfasts when overseas, the new hotel has two significant rooms that I would like to cast my historian’s eyes over. Firstly the 101-seat dining hall, considered the largest in the world, where the Nizam ensured that his banqueting guests ate from solid gold plates. Secondly the Durbar Hall, complete with its carved wooden ceilings, long line of chandeliers and parquet flooring. The Durbar Hall, typically the ruler’s formal meeting space, once hosted royal guests like King George V and Czar Nicholas II. 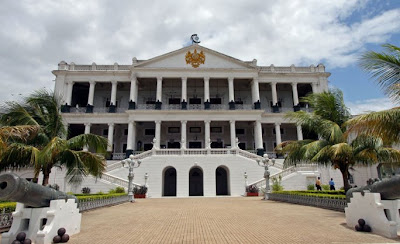 The renovated palace hotel, 2010
Falaknuma Palace Hotel even has a resident historian, Mr Prabhakar Mahindrakar. The Style Saloniste blog tells of meeting and spending time with Mr Mahindrakar, examining the architectural and art treasures of the palace hotel. Her interior photos are worth a closer look.

Many of the names seem familiar from Jewel in the Crown. It does seem that money can buy good taste and I thing the table is longer than HRH's formal dining table.

money certain can buy good taste. And mega-wealth can buy staggeringly special taste. The Nizams' diamonds were bigger and purer, their cars jazzier and more Deco, their ten palaces more impressive than anyone else's.

The Nizams did have one bit of luck, however - they were given very special privileges by the British.

Not particularly sure I think the foreign style works here but I wouldn't say no to a few nights. There are several good Indian documentaries on YT that give a real sense of its luxury.

*nod* agreed. A half way moral person is bound to feel very ambivalent. On one hand, the rich are obscenely rich and the poor sleep on railway station platforms. On the other hand, the history of India in the late 19th century is important.

Half of me wishes to stay and lap up the luxury, but the other half remembers that some of the most enjoyable stays in the subcontinent were in humble abodes where the people made all the difference.

Someone who is poor and shares willingly what little they have with a stranger puts everything into perspective. That little freely offered becomes a bounty worhty of a king.

amen to that. I have never had the money to stay in something over the top and luxurious, but what would happen if the money WAS available?

I think The Style Saloniste blog got it right. She spent time with the hotel historian, examining the architectural and art treasures of the palace hotel. She loved every moment of the experience.

Seating World India provides different types of Chandeiers in Hyderabad we provide quality products to our customers, you can get variety of Chandeliers at our store