Ballarat is Victoria’s third biggest city, its establishment being largely based on the gold rush of the 1851. The first Jewish services were held in a hotel in busy Lydiard St (Clarendon Hotel), as early as 1853. So within two years after gold was discovered in the area, a fledgling Jewish community in Ballarat could already be identified. The numbers grew until a permanent synagogue was required. 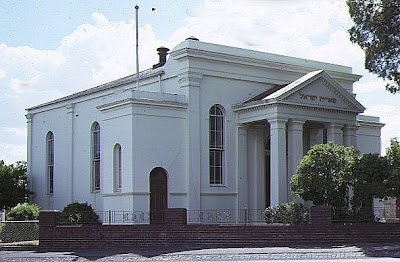 A first synagogue was built in Ballarat East, but in 1859 the Town Council requisitioned the land for its own town hall. In compensation, the Town Council granted the congregation a replacement site at the corner of Barkly and Princess Streets, and paid for the new building.

The synagogue was designed by an English architect, TB Cameron, and was consecrated in 1861. Documents from that consecration ceremony are held in the University of Sydney archives.

The Ballarat newspapers were delighted that such an elegant building had been completed. They felt it gave Ballarat, so recently a tatty mining town of tents and cheap pubs, the cachet of refinement and learning. The city’s main street, Sturt St, was planted with blue gums in the 1860s and gardens down the centre. The beautiful Ballarat Mechanics' Institute in Sturt St, was opened in 1860. Walter Craig bought the magnificent Craig’s Hotel in 1857. His guests included Prince Albert, the Duke of Edinburgh, the Duke of Clarence, the Duke and Duchess of York and Dame Nellie Melba. Opened as the Academy of Music in 1875, Her Majesty’s Theatre attracted the cream of the industry to Ballarat. Beautiful churches in bluestone attracted as much attention as the synagogue. 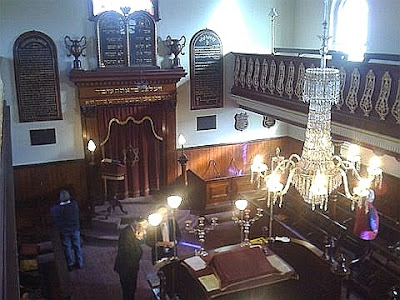 According to the Heritage Council, the Synagogue is a single storey rectangular building designed in a renaissance style with pedimented portico fronting a parapeted main hall. Paired Tuscan squared columns and pilasters support the portico, the tympanum of which contains the Hebrew name of the congregation. Tuscan pilasters support the deep cornice of the main parapet and divide the side facades into bays. Simple, tall round-headed window openings flank the front portico, along the sides of the main hall.

Remodelling was undertaken in 1878, including the extension of the women's gallery along the sides of the hall (instead of just along the back wall), and the addition of a second staircase to the gallery and ante-rooms towards the front of the building. Externally the latter are in a style consistent with that of the building. The Synagogue was originally constructed in face brickwork, with contrast provided by rendered pilasters and columns. Since then, the entire building has since been rendered.

The interior of the synagogue is largely intact with its original furniture and fittings, including a cedar bimah-reading table and cedar-fronted ark. The cast iron balustrading on the women’s gallery comes as something of a surprise. The building was designed to accommodate 350. 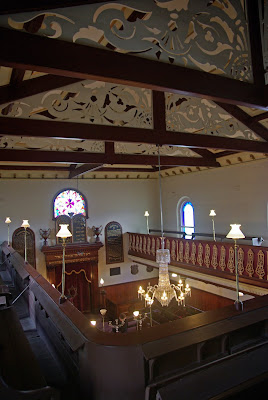 It is difficult to know how many Jewish people lived in Ballarat during the heyday of the community. The 300 identified members of the congregation only included the men, so perhaps there were 1000 people altogether in the 1870s and 1880s. On the whole, the Jewish men were not themselves gold miners; rather they were shop keepers and tradesmen, servicing the miners. But the Jewish population of Ballarat fell away with the collapse of the banking system in 1891 and never recovered its earlier importance.

The Paul Simon Hall behind the synagogue was the original Jewish school house for Ballarat; and noone seems to have any information about this small building.

This regional city has one of the few surviving C19th synagogues in Victoria, so the building was quickly put on the Victorian Heritage Register of significant sites. Today it is only used for services on holy days, weddings and when Jewish tour groups arrive from Melbourne and Sydney.

The Ballarat Synagogue is not hemmed by tall buildings, nonetheless it is not as light and airy as it might have been. Examine the Congregation of Jacob Synagogue /Kehillas Ya'akov, in the East End of London, which was founded in 1903. Totally hemmed in between the adjacent buildings, the Congregation of Jacob's glass roof allows natural light to flood into the nave.

Thanks, Helen, for this interesting history. I try to imagine Jewish life in Ballarat in gold rush days.

What a beautiful interior. Do you know any more about the architect - never heard of him?

Ballarat must have certainly been a hopping and jumping place!

The Heritage Council of Victoria said that the Ballarat Hebrew congregation (1861) was TB Cameron’s only known building in Australia before he departed for New Zealand. The Heritage Council say he was English, but sometimes he appeared to be a Scotsman.

There are mentions of him in the south island of New Zealand in the 1870s and 1880s. For example, the Municipal Chambers Building in Dunedin was erected under the supervision of architect Robert Lawson, the original design having been won in competition by TB Cameron, “of Auckland”.

In May 1879, an advertisement appeared in Otago calling tenders for "taking down and rebuilding the Queen's Arms Hotel". It was signed by T.B. Cameron, Architect.

The Presbyterian church in Caversham, Dunedin was built in 1883 following the destruction of the previous building by fire. The current bluestone building was designed by TB Cameron.

You may already have seen this of course:

Hermes, I love it when people give me good references. Thanks.

If the students find references I don't know about, I add them to the course reading list immediately.

This is interesting. I had no idea there were any synagogues in Australia outside the big cities.
Sydney - City and Suburbs

This building is so familiar. I have seen one very similar to it in Vancouver - at least I think; it's just hovering beyond memory - darn.

Jim, the Age wrote: "A Grand Egyptian-style synagogue was built in 1872, in Hopetoun Street Bendigo, and there were 150 members. By the 1920s, with mines closing and families moving to the city, membership dried up. The synagogue became a grain store. This fine Byzantine building was demolished in 1926".

Your can see the splendid architecture in the Bendigo Historical Society Inc's page.

Geelong's synagogue is still standing, albeit unused; Newcastle's you will find easily.

Different continents, different dates and different religious identities, but they had something in common. The boards of these synagogues all had to brief non-Jewish architects on what they needed. Primarily they needed NOT to look like a church. Gothic was out but classical Greek Temple or Renaissance Classicism was in.

What a fascinating building!

Very true! I have just had a request from Haaretz English Edition newspaper in Tel Aviv to cite this blog post in their article on Ballarat.

Thank you for this informative article. I cannot make out the full name of the synagogue in the Hebrew on the portico.

From a bigger photo, the first word is שְׁאֵרִית meaning remainder.
Thus the Ballarat tiny Jewish community must have seemed like the Remnant of Israel.

Nice to hear from you, thanks for leaving a message.

Yes, Ballarat and Bendigo were very interesting. In Bendigo we took a chinese gentleman's advice to visit the chinese cemetery nearby and by coincidence, the Jewish section was right next to it. We saw tombstones dated as far back as 1864 and as recent as 2020.

In Shepparton we saw a small monument dedicated to the location of where the synagogue used to be and in Echuca we noticed a gigantic Magen David on one of the buildings which made it look like a former synagogue, but later we found out that the first owner happened to be Jewish and it never was used as a house of prayer. We have enjoyed our travels very much and probably will have another year of getting to know the country we live in before we head back overseas!