I knew that King Ludwig II of Bavaria largely bankrolled the Fest-spielhaus in Bayreuth, an opera house dedicated to the performance of Richard Wagner (1813–1883)'s works. But he also paid for the construction of Haus Wahnfried, in the same town, for the Wagner family.


The name of the villa is interesting. Wahnen means endless striving of an artist for the fulfilment of his aspirations and the triumph of his art. So Wahnfried (Wahnen free) was the name chosen and even today we can see Wagner's motto on the front: "Here where my delusions have found peace, let this place be named Wahnfried." 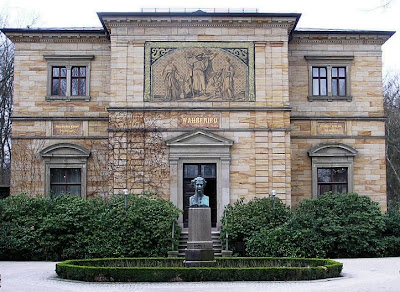 Above the door is a giant mural, depicting Wotan, King of the Gods and the philandering wanderer, being welcomed by classical women. We should also note that Wotan was the name of Wagner’s beloved St Bernard dog.


The villa was built in 1872-74, based on architectural plans from Berlin architect Wilhelm Neumann. Once completed, Wagner lived here with his wife, children and step children until his death in 1883. Then several later generations of Wagners continued to live in the house until 1966.

After the house had been seriously damaged in a bombing raid in 1945, grandson Wieland Wagner decided to rebuild the villa in a more modern manner. Fortunately for history, these alterations were later removed when the house was restored to its original appearance.

Wahnfried has been a museum since 1976, displaying with a wide range of Wagner memorabilia, including manuscripts, pianos, furnishings, artefacts and set designs. The Richard Wagner Museum is going to celebrate Wagner’s 200th birthday in 2013 so the timing is perfect for refurbishing Wahnfried Haus in general and for extending the Richard Wagner Museum in particular.

What does the interior look like? The whole house was a place where Wagner could compose, raise his family and entertain guests. The Grand Hall is a two-storey space with a gallery around the second floor and a skylight in the ceiling. Furnishings include two of Wagner's pianos and numerous busts. The specially designed Bechstein piano was the piano Wagner used to compose Meistersinger, part of Siegfried and Parsifal. It was a present from the endlessly patient, endlessly generous King Ludwig II for Wagner's birthday in 1864.

To the right is the dining room and to the left the Purple Drawing Room, where Wagner's wife Cosima Liszt von Bülow Wagner received visitors. Both are exhibition rooms now, the dining room focusing on Wahnfried's history. 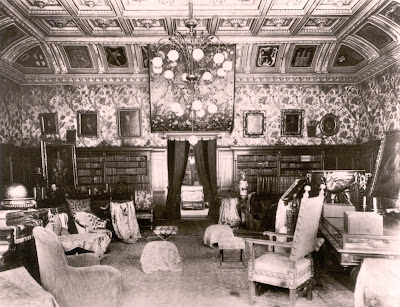 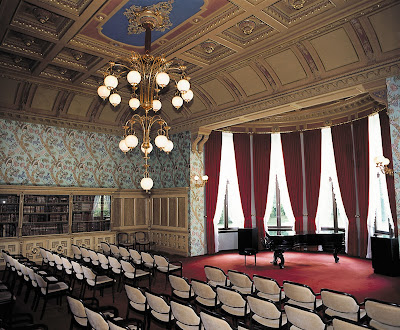 Wagner's richly decorated study was a gathering place for family, as well as a music room and library. The semi-circular bay looks out onto the back garden. Now it is used as a concert space where visitors can hear Wagner’s music.

The mezzanine level was where the family had their dressing rooms. The one to the right showcases Wagner's life in the 1840s, while the one to the left covers the 1850s and early 1860s. Today the dressing rooms have exhibits on the post-war Bayreuth Festivals.

The second floor was where the bedroom of Wagner’s son Siegfried had been, directly over the vestibule. Now it displays artefacts from Richard Wagner's early life. To the east are the three bedrooms of Wagner's two daughters and two step-daughters. They contain exhibitions from Wagner's later life. 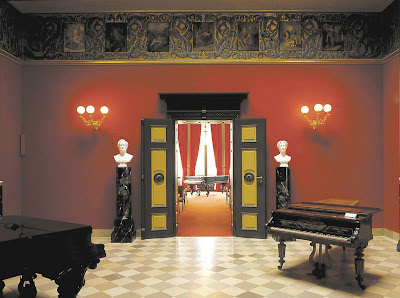 Grand Hall with the two pianos

Some of the rooms are dedicated specifically to the Bayreuth Festival. The large room over the study was the nursery; now it focuses on the first thirty years of the Festival. The displays in Cosima's old bedroom cover the Festival from 1908 to 1930, while materials in the master bedroom deal with the 1930s. Wagner's private study concentrates on the post WW2 Festivals. The basement level has displays of Bayreuth Festival stage designs.

Richard Wagner did not die in his home. Rather he died in Venice while visiting in 1883, but his family had his body brought to Bayreuth for burial. In 1886, the composer Franz Liszt died in Bayreuth while visiting his daughter Cosima Liszt, Wagner's widow. So Liszt was also buried in this smallish town.


Visit the garden behind the house. In a shady grove beyond the garden, surrounded with ivy, is the tomb of Richard and Cosima Wagner. The stone is unmarked, because as Wagner insisted, as long as it remained, everyone would know who was buried there. From there, visitors can go on a walk in the remote Hofgarten, the baroque park of Bayreuth's New Castle, via a direct path from the house. 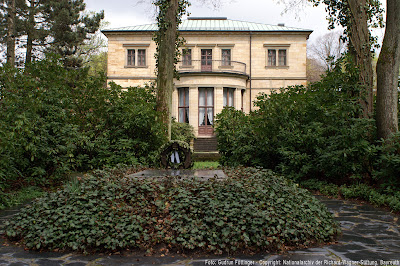 Back of Wahnfried Haus. Ivy-covered tomb of Richard and Cosima

I recommend Paul Doolan's journal article called "Wagner & Mathilde" in History Today, November 2011. The story of their relationship and its impact on Wagner's life started long before Wahnfried Haus was built in 1872-74, but the disruptions and frustrations Wagner suffered in the early decades predicted the man he became in his later decades.

I could really become a little jealous, seeing how much you're traveling.
Even though I hope you enjoy it. At least you let others participate.

I was fascinated by the interior - not sure why but it was nothing like I expected - something more minimalist and stark ? But absolutely fascinating.

academe is tragically underpaid but travel connected to work is largely tax deductible. As you can see from my blog, most of my work concerns Britain and the Empire, and Europe. And what a pleasure the travel has been :)

Yes!! I worried about the starkness as well. It seems inevitable, from the photo of Wagner's original study, that the house was actually a livable family home. I have also seen group portraits (of Wagner, Cosima and Liszt), taken in Wahnfried Haus, where the family is seated in comfort.

It would be interesting if the curators of the Wagner Museum told us how they made their decisions about the room interiors.

You are a Great while writing in the blogs it is awesome I liked it too much good and informative thanks for the sharing.

I do think the best way of knowing a person, as well as by examining their work, is to get to know their life and times well. There is nothing like standing in Wagner's own house.

Sorry, I don't want to spoil your day. But maybe you should control the comments first before they are published. Because the comment by this Mr. "jacob neruda" is evidently done by a robot and serves only to get a better Google-rating for some Viagra online-shop.
Stuff like this is spoiling blogs quite a while.

thanks :) I didn't delete jacob neruda because he seemed to be having problems with English and I felt sorry for him. However I received another letter in perfectly good English that had nothing whatsoever to do with the topic and I deleted that letter straight away.

I like your blog. It is quite interesting. Thanks for sharing.

Wagner continues to fascinate, doesn't he? His music of course, but also his life and times.

Fascinate he does. I don't know of anyone comparable. This is a very fine article about Haus Wahnfried. Very nice photos too. I have been there and it all came back as I browsed through this. Incidentally, I borrowed the name of his villa for my own residence. Love it. It also has a certain magic about it.

me too. I didn't like Wagner's political views, but his house and garden are a delight.