I was watching a tv detective programme called New Tricks where the team reopened an old case involving magic and murder. The detectives spent a session at the Magic Circle Museum in London that included a display of magic and a discussion about the museum's archives:  stage props, posters and theatrical history. The museum guide focused on a famous Edwardian magician called Chung Ling Soo.

Chung Ling Soo was the stage name of the American magician William Ellsworth Robinson (1861–1918). I did try to find details of his early life, but the magician seemed to have secreted his privacy in a smoke screen.  Nothing was known of his life until after he died, and even then the stories were vague. So I recommend readers find the book The Glorious Deception: The Double Life of William Robinson, aka Chung Ling Soo, written by Jim Steinmeyer and published by Carroll & Graf in 2005. The author discovered the New York origins of his protagonist. But Steinmeyer struggled to find the accurate details about Robinson’s wife Olive, his family life and his girlfriend. Apparently William Robinson kept a second family with a mistress in a classy outer suburb of London.

Father James Robinson had himself been  a versatile performer, known for magic, ventriloquism and music. When he was old enough, William Robinson worked on-stage in New York and built props for other magicians like Harry Kellar, Alexander Herrmann and Adelaide Herrmann.

Slowly William developed his own programme of magic tricks, styling himself the Man of Mystery. Only later, to increase his exoticism and Orientalist mystique, did he become a new persona, Chung Ling Soo. The timing was right - the West’s interest in discovering Oriental culture was at its peak. 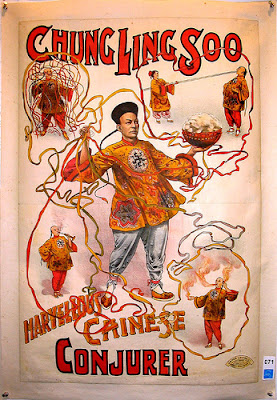 Chung Ling Soo moved his performance to Europe (in 1905?) where he scrupulously maintained his persona as a Chinese man. Noone ever heard him speak on stage during his act and he was always careful to use an interpreter when he spoke to the press. I'd be interested to know how many people stared at his European face and wondered how it was that he didn’t know a single word of English.

Chung's most famous stage trick occurred when his sidekicks, dressed as Boxers, took a gun on stage and fired it at Chung. The real Boxer Rebellion of 1899-1901 had taken place in China just a few years earlier; perhaps European theatre-goers knew that the Boxers were a secret society of Chinese who had suffered under colonial oppression, and who opposed both imperialism and Christianity. Appropriately for Chung, the real Boxers were very skilled in the martial arts.

I was delighted to read that Chung Ling Soo made his first appearance in Sydney in April 1909. He travelled to Australia accompanied by a multitude of assistants, including his wife and seventy-five tons of luggage. He was paid four hundred pounds a week for his tour of Australia - a larger salary than the Governor General received at the time. And there was no problem with audience numbers. Chung Ling Soo strolled around the streets of Sydney, casually performing miracles as he went by. It astounded the on-lookers and was so successful in advertising his show that the Tivoli was packed out each night.

Anyhow Chung’s magic involved the star catching the bullets from the air and dropping them on a plate he held up in front of his face. In fact fake bullets were loaded into the gun, then there was a loud gun shot sound and a cloud of gunpowder smoke filled the stage. Largely the trick was successful; only once did it fail!

The theatre called Wood Green Empire in North London was built for Oswald Stoll and designed by the well known theatre architect, Frank Matcham. The spacious theatre had opened just before WW1 (1912) with stalls, dress circle and upper circle. Vaudeville, music hall, music, dancing and magic were all exciting entertainments where people immersed themselves in the exotic and the strange. Harry Houdini (1874–1926) comes immediately to mind. 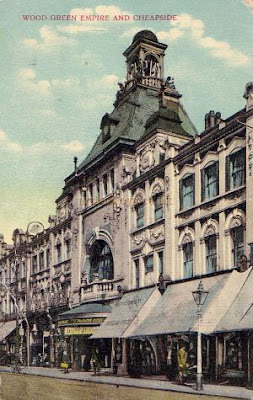 Towards the end of a truly horrible war in March 1918, Chung was performing in the Wood Green Empire London, to a jam-packed and very appreciative audience. The bullet was fired in the normal way, hitting Chung in the chest. But this time the bullet was real! Chung apparently had not unloaded the gun properly.

Chung was taken to a nearby hospital, but he died the next day, aged 57. Noone could understand how a skilful, experienced magician could have made such an appalling mistake. In the event, the circumstances of the accident were verified by a noted gun expert and despite conspiracy theories, the coroner was confident in his ruling that Chung had met Accidental Death. The magician was buried in the East Sheen Cemetery in Richmond (London).

A musical drama called The Original Chinese Conjuror  opened at Southwold Pier in 2006 then went on to the Almeida in London. Created by Raymond Yiu with a libretto by Lee Warren, the story followed Chung Ling Soo from his early career in New York to his tragic death in London. 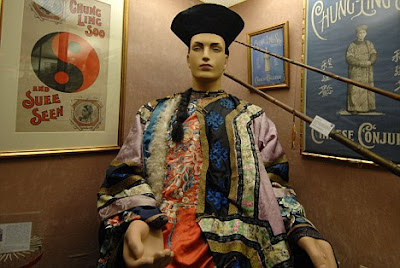 A friend of mine is in the Magic Circle but I only knew the name Chung Ling Soo so was fascinated to read the details. I did know Carl Hertz (Louis Morgenstein) visited South Africa and Australia as he was involved in the early cinema. Thanks Helen.

I can only say fascinating and what a segue. I have an unfinished pending post about New Tricks, but best I don't link back to your post, as it is irrelevant. I am sure I have seen every episode but I can't remember that one.

The Great War? World War I? I prefer your term, the Truly Horrible War. It was the worst.

I assume that they knew each other, even if there was some professional rivalry. Carl Hertz (1859-1924) and Chung Ling Soo (1861-1918) had almost identical life spans, both came from the USA, both travelled around Europe and Australia etc, and they seemed to mix largely with other performers.

the 2008 New Tricks programme was called "Magic Majestic" and you can find the details in http://www.imdb.com/title/tt1276328/plotsummary

I had written this post _before_ I saw the tv programme and was utterly delighted to hear the characters discussing the Magic Circle and Chung Ling Soo. My husband came rushing into the tv room to see what I was so excited about :)

The State Library of Victory has a collection of Chung Ling Soo materials - photos, postcards, posters and other material.

The National Archives of Australia in Canberra also have some material.

student,
many thanks.
I can check the State Library material very easily.

Did you realise that Harry Houdini also came to Australia (in 1910)? His trip was very well documented because Houdini, being fascinated with aviation, was one of the pioneer pilots in the world and certainly one of the very first here in Australia.

A friend of mine is in the Magic Circle but I only knew the name Chung Ling Soo so was fascinated to read the details.

thank you. I suspect that "The Glorious Deception: The Double Life of William Robinson, aka Chung Ling Soo" will not be the last research to be published on Chung Ling Soo.

His great rival, the Chinese magician Ching Ling Foo, also worked in the USA and Britain, and must have known a great deal about our man.

yes!! Chung Ling Soo and Wei Ling Soo had similar dates, make up, magic tricks etc. And neither spoke during their act, so noone would detect the lack of Chinese language.

Joseph Vallot built The Alps’ first observatory in 1890. Standing at 4,350 metres, the Vallot Observatory hosted many scientific experiments over the following decades. It was also to prove an unlikely showcase for interior design. The cabin comprised a kitchen, a laboratory and, most incongruously, the so-called Chinese Salon. This room was decorated with Vallot’s collection of objects from the Far East, including masks, tapestries, embroidered carpets, lacquered furniture, a Samurai helmet and a sofa inlaid with mother of pearl. Vallot had never left France but his Chinese Salon – conceived as the civilised antithesis of the hostile outside environment – is a curious example of Europe’s fascination with the Far East spreading to its frontiers.

Yes! The two men were quite different, in careers and countries, but the dates were very close. Vallot's Chinese Salon in the French Alps was created in 1898, the same time as Chung Ling Soo was creating a stage and role for himself in New York. As I thought and you confirmed, the timing was right - the West’s interest in discovering Oriental culture was at its peak.