Richard Cavendish wrote that the American Civil War was fought to preserve the Union. There had long been tensions between the rights of the states and those of the federal government, going back to the issue of tariffs in the 1830s. But it was slavery that brought matters to a breaking point. Slavery had been made illegal in all the northern states by the early 1800s and, with European immigrants supplying cheap labour for the industrialising economy, the North was pleased when the abolitionist movement gained strength. Northerners seemed ashamed that slavery had ever been tolerated in the USA.

But the South regarded slavery as crucial to its plantation economy, to its society and its traditions. It was estimated that c650,000 Africans had been exported to the USA before the British abolition of slavery in 1807. By 1860, slaves accounted for 4 million people, out of a total population of 23 million (17.4%) and a quarter of all white families in the South owned slaves. Southern cotton production was making record profits.

In 1860 Abraham Lincoln became the Republican president, carrying all the northern states bar one. His triumph convinced politicians in the South that slavery would soon be banned by an amendment to the constitution. There were committed unionists in all the southern states, but the prevailing opinion was that the sudden liberation of 4 million Africans would be a nightmare. And, presumably, a financial catastrophe for the South. 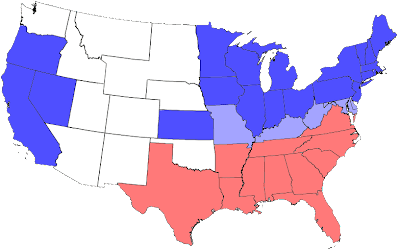 In Feb 1861, a congress in Montgomery Al. adopted a constitution for the new Confederate States of America – Mississippi, Florida, Alabama, Georgia, Louisiana and Texas would together create the new nation. Then Virginia, North Carolina, Arkansas and Tennessee joined the Confederacy and both sides organised their armies. The War Between the States eventually killed almost 700,000 young men.

Now let me leap to 1961 when Americans prepared to mark the 100th anniversary of the nation’s worst ever conflict, the Civil War. According to Robert Cook, the centennial had been planned by the USA Civil War Centennial Commission as a means of steeling citizens in the Cold War struggle against communism. High-profile heritage projects were designed to showcase America’s commitment to liberty. The Freedom Train, a travelling collection of the nation’s canonical documents, was a prime example of how public elites sought to use their version of history to build support for the anti-communist crusade.

The anniversary of a bloodthirsty civil war may have seemed an unlikely subject for national unity, Cook noted, particularly as that conflict had left southern whites embittered by defeat. And particularly since the Civil War Commission had assumed in 1961 that the anniversary would be a whites-only affair. The entire project seemed shocking when black delegates to the Commission were banned from racially segregated Charleston hotels.

The Civil War had to be quickly rebranded in the national memory. Once a vessel for myriad internal hatreds, the war was to become the moment when America had been reunited, and a modern superpower was born. Did it work? Celebrating the southern states’ secession from the Union made perfect sense to the 1961 segregationists who dominated the region’s state centennial agencies. What better way to mobilise grass roots opposition to court-ordered desegregation and black civil rights activism than to remind ordinary whites of their ancestors’ vigorous resistance to Federal tyranny! 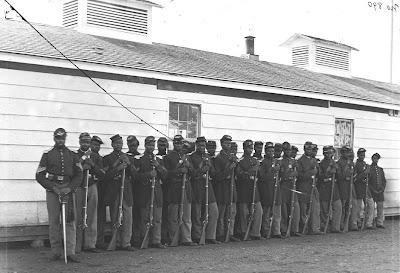 In fact there was so much enthusiasm for the Confederacy in the South that advisors were telling President John F Kennedy that the centennial could totally endanger the USA's unity. So it may not be surprising that the combination of neo-Confederate theatre and the exclusion of blacks proved disastrous for the centennial. Blacks and Northern whites were appalled by the ease with which segregationists had co-opted the centennial.

In Sept 1962 a hastily reorganised Civil War Commission hosted an event at the Lincoln Memorial to commemorate the preliminary Emancipation Proclamation. Although the commission chose to equate emancipation with the anti-communist crusade for human freedom, rather than the fight for racial justice at home, major civil rights campaigns in 1963 and 1964 made them unresponsive to southern fears that the CWCC had become a mouthpiece for integration. Cook concluded that when it ended in April 1965, most Americans simply disregarded the Civil War centennial.

Because I am not an American history scholar, I have tried to quote Cavendish and Cook as closely as possible. However there are still questions that I would like to ask. What proportion of soldiers on both sides were black? I know that in July 1862, Congress passed an Act that freed slaves who had masters in the Confederate Army. Recruitment was slow until black leaders encouraged black men to become soldiers, to ensure eventual full citizenship. At the same time, the National Archives suggest that by the end of the Civil War, 179,000 black men (10% of the Union Army) served as soldiers in the USA Army and another 19,000 served in the Navy. Nearly 40,000 black soldiers died over the course of the war. Were they not an important part of the Civil War, especially on the Union side?

I really do understand why slaves were an important part of the Southern economy and I can almost understand why southern states would go to war in 1861 to protect either their states’ rights against Federal or northern intervention, or to protect their economies. But why were these powerful symbols of separation still valid by 1961??

Normally after a civil war, the seceding states would use their symbols of separation only in two cases – firstly if they won the civil war or secondly if they were still hoping to secede some time in the future. Robert Cook was right. The anniversary of a miserable and destructive civil war was an unlikely subject for national unity, no matter how it was rebranded. 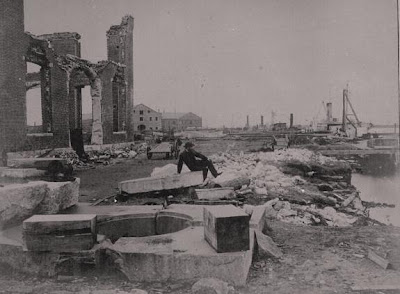 'and a quarter of all white families in the South owned slaves'. Although even now, some people could be considered slaves, it struck me that one human owning another is a very odd thing. A good historical summary, thanks.

Andrew
although this is a vital topic to discuss, I felt quite shaky doing the writing. Firstly I know heaps about Britain, the British Empire and Europe, but much less about the Western Hemisphere. Secondly all war is horrific, but civil war is much more divisive, more bitter and more destructive to a nation.

Even more than slavery, the issue of rights of the states Vs those of the federal government fuelled the American Civil War.

Australia moved peacefully towards Federation on 1/1/1901 and we haven't been too exercised about those issues since. In the USA, it seems, the right wing is still expressing as much anti-Federal government fervour as they did in the Civil War.

Not really my subject but the invention of the cotton gin made cotton very profitable but the north actually made more money out of the finished goods. Another factor seems to have been whether the Louisiana purchase states were slave states or not. Britain's role is interesting:

Thanks for the references. Two main points stand out.

Once the war with the USA began, the best hope for the survival of the Confederacy was military intervention by Britain and France. The federal American government realised this as well and made it clear that recognition of the Confederacy meant war with the USA. Apart from the fact that slavery was the core of the South's plantation economy, repugnant to the morals of most Britons, Britain would have been financially insane to back the breakaway Confederacy and to go to war against the north.

What a great map Helen. Apart from anything else I'd forgotten / not realised how much territory Mexico had owned. The Alamo comes more into perspective.

You take me all sorts of places.

Why did many African slaves, or ex-slaves, fight for the south? Why didn't they run away to a free state?

Did many black men, free or slave, take up arms for Confederacy? Whatever may have been the number of blacks serving and actually fighting as soldiers in the Confederate army, it must have been a minuscule percentage. It was so insignificant that no-one could say that blacks saw the conflict as a war of Yankee aggression, felt it was their war too, and joined up to fight for the Confederacy.

I still can't get over the catastrophic loss of life in this war.

And as you rightly say Helen, the fact that it was a civil war where soldiers were fighting and killing their own countrymen makes it all the more tragic.

in ordinary wars, armies come and armies go. Old enemies in one war site become allies in the next. Mothers mourn their dead sons, but nations don't even remember. Think, for example, of the shifting alliances and divisions between Talliban, Russia, USA, Afghanistan and Pakistan.

But the divisive scars of civil war are never forgotten, never forgiven and they never heal. A miserable and destructive civil war was always going to be an inappropriate subject for national unity, specifically because half the nation felt embittered and defeated, at the hands of their _own_ brothers and neighbours.

Many children and Fathers had gone in the war to get money or thinking that it would end in the first battle instead it lasted 3-4 years.620,000 people died and that is just a guess it turns out there could be more. People who lived in the border states or otherwise anywhere else could be rooting for different sides which would even split family's and friends from one another. I feel that war is useless, why fight. For all we know if we were civilized then we could be playing extreme chess to decide what to do instead of fighting. In my point of view it seems that the govement is sending people who are looking for hope to their deaths for a silly thing that they themselves have started.

But going to war to make money? I don't think so. Soldiers either volunteered because they believed in the cause, or they were conscripted and had no choice.