In 1835 Parliament approved the construction of a railway between London and Bristol, to be designed by the Chief Engineer, Isambard Kingdom Brunel. In 1840 Brunel chose Swindon as the site for the railway works he planned for the Great Western Railway. The town was perfectly located, half way between Bristol and London. As a result, the tiny market town of 2,000 residents became a substantial railway town of 50,000 within a few decades. 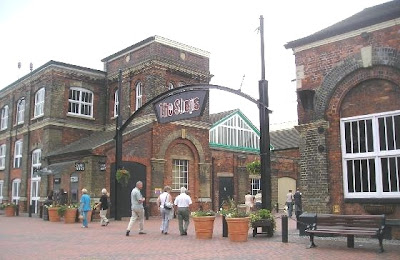 Swindon’s first facility, the locomotive repair shed, was completed in 1841, then multi-storeyed Swindon Junction station was quickly completed and opened only one year later. Both of these facilities made sense since every train, in either direction, stopped for at least 10 minutes to change locomotives. As a result, Swindon station hosted the first recorded railway refreshment rooms. It must have been a rather fancy railway station since there were refreshment rooms on the ground floor for hasty access, and the more leisurely station hotel and lounge were available upstairs.

The boiler and tender making shops opened in Swindon in 1875, necessary to produce parts for locomotives, and marine engines for the GWR's fleet of ships and barges. These workshops were critically important for the Company, but I am more interested in the workers’ needs. 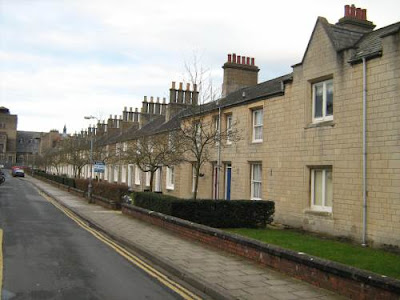 The Great Western Railway built a small village to house some of its workers, 1.5 ks north of Swindon town. These railway workers’ cottages in New Swindon were built in limestone by one firm, based on a single model. The cottages may have been small, but they were considered to be of a good standard.

Later in the 1860s iron rolling mills were established at the works, so a new type of skilled worker was required; this resulted in an influx of men from Wales and its iron industry. Only when hundreds of these new railway workers flooded into Swindon looking for permanent work did overcrowding and poor sanitation become problematic. In 1864 New Swindon saw its first gas street lights installed and in 1868 the workers gained a fresh water supply, piped to the cottages.

This was a remarkable project, set up to look after the needs of workers and their families – partially to be Christian and charitable, but mainly to maximise the workers’ productivity. Since Swindon had few services before the railways arrived, the entire town benefited from the new educational and health facilities.

I suppose that for the workers, the top priority was for education. Firstly they built and staffed a good primary school for the workers’ children. And within a couple of years, in 1843, Swindon College was founded as a technical school for railway families. 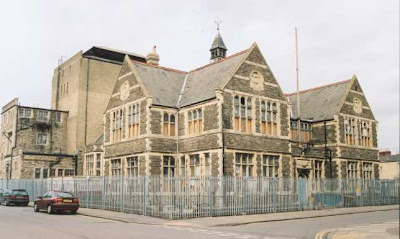 The Mechanics' Institute, probably started in 1855, was the critical service that helped workers towards self-improvement and created well educated manual workers. And another educative component was even more impressive – Swindon had the nation's first lending library.

Health care was also critical. Important community services within the village were the GWR Medical Fund Clinic at Park House and its hospital. From 1871, GWR workers had a small amount deducted from their weekly pay and put into a healthcare fund. In 1878 the fund began providing artificial limbs made by craftsmen from the carriage and wagon works, and nine years later opened its first fully equipped dental service. 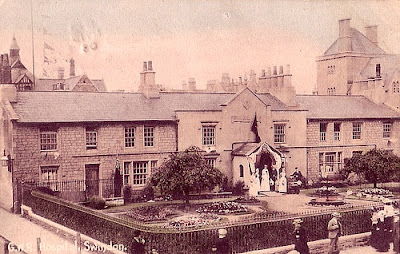 Even retired railway workers continued to receive medical attention from the doctors of GWR Medical Society Fund, which the Institute had played a role in establishing and funding. This responsive and extensive provision of health care services apparently provided a model for the NHS in the next century. Decades later, in the 1890s, the health centre housing clinics, a pharmacy, laundries, a pool and some baths opened Near Park House.

The Steam Railway Museum and English Heritage, including the National Monuments Record, now occupy part of the old works. They are worth seeing.

A useful book to read is The English Urban Landscape by Philip J. Waller. Waller concluded that New Swindon was not a workers' paradise. Although the health and educational facilities provided excellent services to workers and their families, life in a company town could be difficult. If the GWR was doing badly, and staff were laid off, the entire family would lose its cottage in New Swindon, its income and any ability to argue with the railway authorities. Air pollution was endemic and noise was constant throughout the day and night. Nonetheless New Swindon was altogether rather impressive for workers in the mid Victorian era. 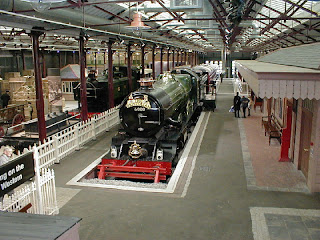 Museum of the Great Western Railway, today
The Brunel Shopping Centre was first built in the old, disused railway workshops in 1978. Later it was revamped and turned into Brunel Arcade and Brunel Plaza (in the 1990s).
Posted by Hels at 25.10.11

The museum looks good. I have only seen two train museums, Australia's national railway museum in Adelaide and one in Tokyo. I suppose it comes down to funding, but the Tokyo one was so much better as there was space around the trains and everything was well lit. The Adelaide one is the exact opposite with too many trains with little space between them and difficult to see with poor lighting. While I am not sure about the one in Swindon, the Tokyo one was also very interactive. Ok, sometimes kids might damage things accidentally, but rarely would it be a big deal. Kids just love to scramble through a train rather than stare at a carriage from the outside.

Might Yallourn be one of the last places in Australia where the company created a town for workers? Now they would probably fly the workers in and fly them out.

bless your heart! I had not thought of company towns for workers in Australia before, but Yallourn fits the bill perfectly.

I loved the idea that Yallourn was based on MY OWN British planned towns of Welwyn Garden City and Letchworth Garden City. I loved Yallourn's workers' homes, good public transport, parks, schools and top quality recreational facilities.

Hello Helen:
Having lived in Marlborough, a small town some ten or so miles from Swindon, all of this is very familiar. Indeed, after the closure of Marlborough's railway station it became necessary to travel to Swindon to catch the London train. Additionally we would frequently make the journey to Bath so know both the town and line well.

When I first visited Swindon in the 60's there were still railway works (though I think the biggest employer then was the Readers Digest and W H Smiths). The 'model' village was quite small but very forward looking with Britain's first public lending library if I remember right. Great post.

how historically aware were you? were people proud of New Swindon's special history?

I have read the history of many garden cities and company towns, but the special thing about Swindon was already up and running by the early 1840s! I am personally very familiar with planned communities like Welwyn Garden City and Letchworth, but Swindon was decades ahead of the others.

Finding early planned communities that were industrially based has been difficult. Capitalists would not pay for health or recreational services for their workers. Religious communities had good services but no industries.

David Felt built a mill in New Jersey, dams for the mill, housing for the mill workers, a school and a church. But Feltville only lasted from 1845 until 1860.

Hopedale Massachusetts town was settled in 1842 as a Utopian commune, complete with shared housing, planned streets, a public library, school, a machine shop, blacksmiths, market gardens and chapels. Although the commune closed by 1856, Hopedale continued to be the home of the Draper Corporation, manufacturer of automatic cotton looms.

excellent stuff. I found a number of planned religious communities, but because they didn't have a sustainable economic base, most didn't seem to last very long.

The two examples you gave of planned communities with a more industrial base should have done very well. But they didn't seem to provide the workers with a sense of dignity, good health, comfort and excellent community facilities - not as well as New Swindon did.

Rawson might be a more recent town planned by a construction authority. I am not sure of its status now. Yallourn was magnificent. See

As well as often swimming at the pool, and going to the theatre, and where I saw my first Shakespeare play, I may well have been seen occasionally hanging around the local pinball parlour.

great description of Yallourn. And tragic.

"The town was planned, built and owned by the State Electricity Commission of Victoria, whose aim was to secure a contented workforce by providing ideal living conditions. When Yallourn was no longer essential for the SEC, the town was demolished"...

Isn't that the truth! Ideal living conditions when it suited the owners of the company town; dust and rubble when they didn't want to do it any more. The workers were not consulted, I assume.

My memory of the town perhaps goes back to about 1970 and the writing was certainly on the wall for Yallourn from then on. As nice as the town was, I think it was widely known that it was never meant to be permanent. I'm sure that will console someone who had lived there for thirty years.

the Guide to Swindon offered a very similar and sad story.

In 1920 the huge workshops were completed during what was the heyday of the works - they employed over 14,000 people. But 30 years later, when Britain's railways were nationalised in 1948, an end was coming to the GWR story.

The decline of the works was as rapid as its expansion over a century earlier. By 1960 Swindon employed only 5,000 railway men. The payroll was down to 2,200 in 1973 and the works failed to win outside orders. Closing day came for the works in March 1986 - it was a bitter pill to swallow for a town which had been shaped by the expansion of the railway works. And for the families.