Located 120km from Melbourne, Castlemaine was one of many settlements established as a fine area to farm. In 1851 a group of shepherds found gold at Specimen Gully, and in Sept 1851 a letter was published in the Argus newspaper announcing the discovery. The gold rush, once focused on Ballarat, soon descended on the nearby Castlemaine area. 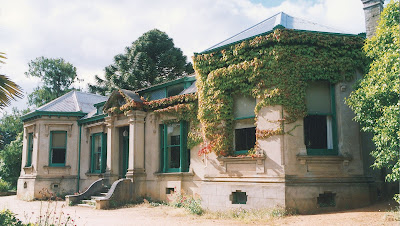 The arrival at London’s port of six ships carrying tonnes of Victorian gold in April 1852 excited Britain. Instead of convicts being forcibly sent, all the new arrivals were now very keen volunteer settlers. A camp was set up and the area north of the camp was surveyed in 1852; Castlemaine was officially born. At this time, 25,000 people were living in tents on the goldfields; fortunately the area turned out to be one of the richest alluvial goldfields in the world.

In early 1854 the gold commissioner ordered diggers to evacuate the shanty town and to start building a proper town. Many significant buildings that are still standing today were erected as a result of that 1854 order - 5 churches, several hotels, solid shops and residences quickly went up. A red-brick court building built then, and located in the current Goldsmiths Crescent, is Victoria’s oldest remaining goldfields building.

The 1850s was a very busy decade. By 1860 the town supported six banks, two newspapers and 30,000 people. The first Castlemaine brewery, home of Castlemaine XXXX, was opened in 1857 by two locals, the Fitzgerald brothers.

The Old Castlemaine Gaol was based on the radical concept of institutional design associated with the Pentonville Model Prison of 1842. Built during the late 1850s, it opened as a penitentiary in 1861 and continued operating as a prison & reformatory until it was finally closed in 1994. During that period, 10 inmates were hanged there and were buried in one of the gaol's outdoor courtyards. The sandstone gaol is one of nine built in Victoria during the mid-1800s, all essentially based on the same radical concept. Of those nine, the massive Castlemaine Gaol was the earliest to be commenced and completed. Its high red brick wall and circular watchtowers are still horrible to look at. 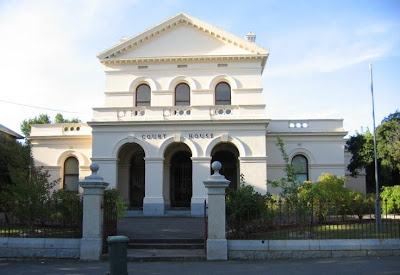 In 1858 the present courthouse was built, a rather lovely building designed by prominent colonial architect, Henry Ginn. A classical porch was added, as Castlemaine became a more elegant town.

The Botanical Gardens were reserved in 1860, laid out by Baron Von Mueller, who designed many of Victoria's public and private gardens. They are now amongst the state’s oldest and feature the English Oak planted by the Duke of Edinburgh during his 1867 visit.

The Castlemaine Market 1861 was originally part of a larger market complex designed by William Downe, town surveyor. Centrally located in Market Square, it reflected the influence of Christopher Wren and was built of stone and brick with cement rendering. Its Classical Revival structure was a symmetrical design centring on a large and elegant portico, capped by a pediment which incorporated a rising sun motif. On the roof line a statue of Ceres, Roman goddess of agriculture/fruitfulness, was placed. 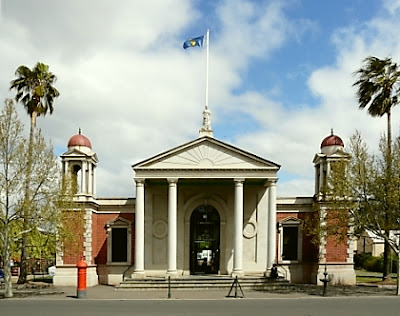 The halls, restored by the National Trust, once housed 22 stalls which vendors accessed through side doors. Market hall's light, spacious interior was based upon a Roman basilica with a clerestory roof featuring unique curved wood trusses. So the space was an excellent venue for celebratory balls: in 1862 for the opening of the railway and in 1867 for the Duke of Edinburgh's visit. The Old Market is now a historical museum.

Unlike Ballarat's and Bendigo's goldfields, the Castlemaine district didn’t have deep reefs of quartz gold. With the exhaustion of the alluvial gold, mining slowed and was replaced by other industries. Fortunately the slate quarry (1859), flour mills, railway foundry and brewery all provided employment. The state’s first large-scale woollen mills opened in 1868, Thompson’s iron and brass foundry in 1875, and Castlemaine Bacon Co. in 1905. Thus Castlemaine, once exclusively a gold town, survived the end of the gold rush.

The elegant Theatre Royal was first built in 1855, the place for Lola Montez to perform her famous Spider Dance in 1856. The original theatre was burned in 1857 but immediately replaced by a stone and brick building with a substantial iron roof, and has been operating ever since. The Theatre Royal and the Royal Hotel were eventually joined by a shared lobby. When the Royal Hotel wanted to go out of business, the Theatre was rebuilt, utilising the whole block. With the coming of moving pictures, the next owners moved with the times and the venue became the deco People's Popular Picture Palace. It was extensively re-modelled in 1938 having lost its High Victorian veranda, dress circle, fixtures and fittings in the early 1920s.

By the early 1970s the Theatre had fallen on hard times. It had a crumbling art deco façade and showed only one performance a week. Then it was renovated and modernised. Amazingly Castlemaine’s Theatre Royal has a history of over 150 years of continuous entertainment in substantially the same building, renovated as needed. It is thus the oldest continually operating theatre on the Australian mainland.

Delhi Villa was built in 1861 by the Baptist missionary Rev James Smith; he had chosen the site for retirement, after the sweatiness of  his mission service in India. When Delhi Villa became the home of noted Hungarian silversmith Ernest Leviny and his new bride in Dec 1864, they changed the name to Buda.  Ernest and Bertha soon had 10 children! Included in the Buda collection today are beautiful silverwork and jewellery designs by Ernest Leviny. I also saw artworks including embroidery, metal craft, photography and woodwork by the five unmarried daughters who resided in the house most of their lives. The two generations of the Leviny family occupied Buda for a period of 118 years (1863-1981).

Leviny was president of the Mt Alexander Castlemaine Horticultural and Agricultural Society in 1863. He invited Baron Ferdinand von Muller to be a regular guest at Buda, whenever the great garden designer was visiting from Melbourne (to work on the Castlemaine Botanic Gardens). Today visitors can walk through the Buda garden to understand the aspirations of those keen Victorian gardeners.

When the postal service was transferred from the gold commissioner's camp in 1859, a wooden post office was built to serve Castlemaine. But in time, a new, more gorgeous building was required. The new post office 1873-5 replaced the old one on the same spot, but the second version was designed as a decorative Classical Revival Italian palazzo, with a splendid central clock tower, arched bays and beaded colours on grey. Knowing the town’s glory days were already fading, why did the good burghers of Castlemaine want or need such an expensive building? 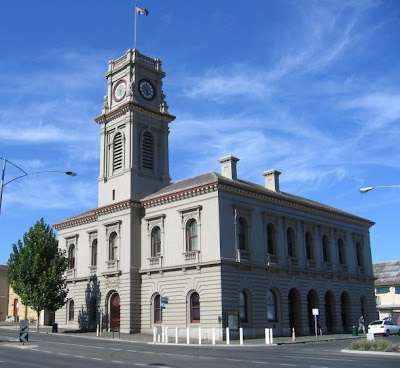 Adjacent to the courthouse is the former School of Mines 1889 and, on the Frederick St corner, was the large red-brick town hall 1898. The façade of this very late Victorian town hall looks better, I think, than it used to. The red bricks have disappeared under stucco, highlighted with white paint.

Founded in 1913, the Castlemaine Art Gallery and Historical Museum has an excellent collection of Australian art and of local historical items. The 1931 art deco building, which has been extended a number of times, is noted for its elegant design and is now Heritage listed. The gallery specialises in Australian paintings and art objects, featuring the Heidelberg School especially Frederick McCubbin and Tom Roberts. Collectively the three Victorian art galleries in Ballarat, Bendigo and Castlemaine hold some of Australia's key 19th century art pieces. 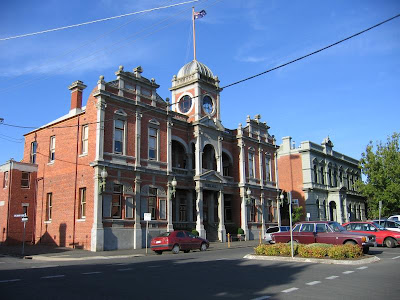 Why did Bendigo and Ballarat continue to grow after the gold rush, but Castlemaine got smaller and smaller. Not that I mind. Castlemaine is lovely.

The Castlemaine goldfields site has some fascinating old photographs including a large Chinese encampment.The architecture is beautiful so some good came out of it all.

Castlemaine's own home page says that although Bendigo and Ballarat gold fields both eventually yielded more gold, theirs was mostly reef gold and required great capital investment and thus were for the Big Fellows.

Castlemaine's alluvial gold was already running out by the 1850s. Bendigo and Ballarat were still successfully deep mining until the start of WW1. By then, the bigger towns had large populations and more industries.

our State Library of Victoria has amazing early photography from the gold fields.

Sadly most miners had to live in pretty squalid conditions, unless they hit paydirt. But beautiful cities did come out of it.

Helen,
were these magnificent buildings built by individual gold miners or collectively as the town prospered through taxes. It fascinates me that the Victorians did not consider it a waste of money to build beautiful public structures.

apart from the private home, Buda, almost all the loveliest buildings were publicly funded, designed, built and used.

The Victorians were totally proud of their cities (I also include Ballarat, Bendigo, Beechworth and other gold cities). They brought the best architects and botanic garden designers from Melbourne out to the rural cities, and sometimes imported even more famous architects from Britain.

The true miracle is that these 1850s and 1860s buildings were not entirely destroyed by development vandals in the 1950s and 1960s. I will create a link to my other gold rush posts eg
Gold Rush Architecture - Ballarat and
Beechworth's Victorian Architecture

I truly love the country where you live. The history and story today was vry interesting.

I would warmly recommend that tourists (from across Australia and overseas) spend a few days in this small area, the heart of the state. The history is well preserved and the architecture is a delight.

Those are really fine architecture.

Tom,
nod. Fine architecture, well preserved and close to all of us living in the SE corner of this wide, brown land.