I have written quite a few times about art stolen from Jewish families during WW2, and I have examined various stages of the repatriation process: stolen art that has been identified, exhibited and compensated.  But I have never focused on Hungary before.

Hungary, a wartime ally of Nazi Germany, was the country that eventually organised the deportation and extermination of its own Jewish citizens. In May 1944, relatively late in the war, the Hungarian Ministry of the Interior issued a decree requiring Jews to register all art objects that they owned. And despite years of negotiations and international appeals for repatriation of this art, Hungary still has those paintings and sculptures. 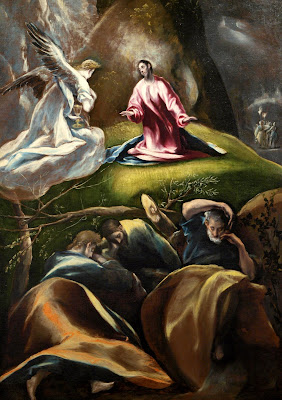 The works I want to examine today come from the collection of Baron Mór Lipót Herzog, a banker and an avid pre-war art collector in Hungary. Heirs to the Herzog Collection, possibly the largest private art collection in Hungary prior to WW2, filed suit in the USA District Court in DC for the return of their grandfather’s artworks. These art objects are currently in the Museum of Fine Arts Budapest, the Hungarian National Galley and the Museum of Applied Arts in Budapest.

Before his death in 1934, Baron Mór Lipót Herzog had bought a total of c2,500 paintings, sculptures, Renaissance furniture, jewellery, silver and other art objects for his collection. They included unbelievable masterpieces by El Greco, Velázquez, Lucas Cranach the Elder, Corot, Renoir and Monet, the best known being being: The Agony in the Garden by El Greco, The Annunciation to Saint Joachim by Lucas Cranach the Elder, The Spring by Gustave Courbet and Portrait of a Woman by Camille Corot.

I have also chosen to show a painting by Francisco de Zurbarán who was born in Spain in 1598. Zurbarán's works were almost all of a religious nature, but his spirituality seemed deeper and more austere than most 17th century artists. Zurbarán's mastery was best seen in his portraits, which I loved, but this all begs the question of why Spanish Catholic Zurbarán appealed so deeply to the urbane, Jewish Hungarian Baron Mór Lipót Herzog. 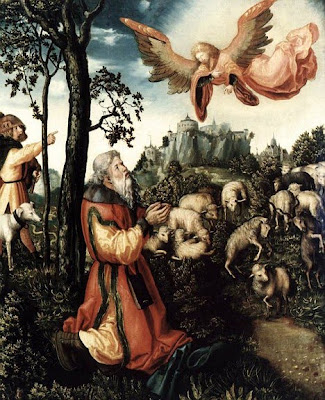 After Baron Mór Lipót Herzog's widow died in 1940, the collection was passed to her three children. The three Herzog children  attempted to save their artworks from confiscation by hiding it in the cellar of one of the family’s factories. Nonetheless the Hungarian government and their Nazi collaborators discovered the hiding place, and an art historian carefully inventoried the art objects as they were taken away. Blogger Les cahiers d'Alain Truong says that the seized artworks were taken to Adolf Eichmann, who selected some of the best pieces of the collection, and shipped others to Germany. The rest was handed over by the Hungarian government to the Museum of Fine Arts for safekeeping.

One Herzog son (András) died during the war, but István and Erzsébet survived and there are heirs from all three branches. In fact András’ daughters, who fled to South America in 1944, are very much part of the litigation.

The family has the support of an American organisation called The Commission for Art Recovery, a body focused on ensuring that governments comply with the Washington Principles for Holocaust-era looted art. Fortunately the works have been assessed by the International Foundation for Art Research as being of museum-quality, comparable to the Frick Collection in New York and Wallace Collection in London.

It is fascinating for me to hear that the Germany and Austria governments already returned artworks from the Herzog Collection to the heirs, without need for legal action. So far, the Hungarian government’s view remains that the case is a matter for the courts, not for individual galleries to negotiate.

The Hungarian government also wants to know why the family is only going after masterpieces in Hungarian galleries and not Herzog art works in other nations' galleries. Mainly it is because the 1947 Treaty of Peace between Hungary and the Allies was very specific -  ownership rights to the Herzog Collection in Hungary remained with the children and grandchildren (and if they wait much longer, with the great grandchildren).

But I suspect there was another factor. It was the Hungarians who most devastated Jewish family life in 1944 and 1945, sending two of the three Herzog children to camps, along with 500,000 other murdered Hungarian Jews. The Italians, Czechs, Romanians and Dutch, on the other hand, tried as best they could to protect their Jewish citizens.

Baron Herzog's study in Budapest, in 1934

It may surprise readers to find that the stunning gold and silver art from the original Herzog collection is being sold off at auction this month (May 2011) by Christie's New York. Who officially owned this gold and silver art, and who consigned the lots to the auction house? Who will receive the proceeds from the auctioned art objects?

Interested readers should find The Rape of Europa 2008 by Lynn H. Nicholas and The Monuments Men by Robert Edsel.

The allies should have sorted this out properly right at the end of the war before people started buying stolen artworks with their own money. A very messy business. Doesn't Herzog's study look wonderful.

Andrew
Many thanks for reminding me. There is a fantastic story about Monuments Men to be read. I will add a reference straight away in this post.

Briefly The Monuments, Fine Arts and Archives Battalion consisted of 345 men and women from thirteen Allied nations who tried to save intact art from the war zones, bringing back any movable objects for preservation purposes. Eventually they hoped to return the art to the rightful owners.

In any case, the 1947 Treaty of Peace between Hungary and the Allies included a specific clause about ownership rights to the Herzog Collection. It didn't help, apparently.

Important paintings, definitely. I can understand why Herzog bought Corot, Courbet, Renoir and Monet. But I wonder why he loved El Greco, Velázquez, Zurbaran and Lucas Cranach.

Hello Helen:
It may come as something of a surprise for you to know that, in the present climate in Hungary, we feel that it would be unwise of us to comment specifically on the ownership of the art works to which you refer in this post.

A legacy of this remains to this day for, after 1990, when property was denationalised, it was inscribed in law that original owners had no claim on any 'real estate' which may have been owned by them prior to the Socialist regime.

The works which you show here, currently housed in the Szépmúvészeti Múseum, are very well known to us. Indeed, the museum has one of the finest collections of El Greco outside of Spain.

The Kieselbach article, that I cited in the post, wrote: The collection of Baron Mór Lipót Herzog (1869-1934) showed great similarity to his brother in law Baron Ferenc Hatvany's collection. Herzog bought and loved every sort of art treasure, and he had a soft spot for the goldsmith's craft and old ceramic objects. There was no equal to his Gothic and Renaissance chasubles in the country; unlike Hatvany, Herzog also owned excellent sculptures. And Herzog showed the stronger involvement with the Old Masters.

Baron Hatvany had formed strong ties with Parisian art dealers by the beginning of the First World War, buying regularly from Durand-Ruel and Bernheim-Jeune. Perhaps Baron Herzog did too.

the true ownership of all art works taken by state and private galleries after war is vexed, and even more vexed 66 years later.
The children and grandchildren have left the country, the paper trail has gone cold and the museums' audiences have grown to love the art works that they think of as their own.

This would be true for all property taken from 1939 on. My husband and his brother hoped to have their parents' house and shop in (the old) Czechoslovakia returned to them. They had little chance of succeeding in the 1970s when their father was still alive; they have zero chance now.

But there is a much bigger problem than the fading of memories and the death of potential witnesses. I am not sure why the Herzog family brought the case before the USA District Court in DC. Why would one nation take any notice of the rulings of another nation's court? Doesn't it have to be an international court?

The Monuments Men is a great story. Interesting story about a looted Matisse came up recently:

Some fascinating stuff about the Chinese recovering looted material in this country lately.

It is just sickening and crazy that nations are still profiting from the Holocaust. A lot of those Hungarian Jews were shipped straight to Treblinka and murdered. I didn't know about the Hunagrian Jews until recently, it is so awful.

Hermes
thank you. What a long, convoluted but ultimately successful story.

Le Mur Rose was finally handed to Frankfurt's Jewish Museum in 2010!!! And of course there was no paper trail - once the 80 items from the collection were auctioned in Germany in 1943, all previous proof of ownership would have disappeared.

It was said that Hitler and Goering planned to carefully save the looted art and after the war, they would transport and display the objects in his hometown of Linz, Austria. This would be the site of the new and very beautiful Führer Museum. Thus the Monument Men had an enormous task.

Re Budapest's looted art in particular, someone might tell us if the Monument Men were ever attached to Allied armies fighting in Hungary.

Emm
The reason the Hungarian experience was particularly tragic was because Hungarian Jews had felt, from 1939-44, they could hopefully survive the war.

The decision to deport all the Jews of Hungary to death camps was not made until April 1944! The Jewish population of Hungary at that stage was 725,000, of whom 500,000 were exterminated in the very last months of the war.

Very informative, thanks for sharing

Even if the original generation of art patrons survived the Holocaust themselves, they have all long gone. So it is up to their children and now their grand-children to go through the tedious, long and very expensive court process, with no guarantee of success.

I got it wrong. It wasn't the Hungarian Jews who were sent to Treblinka as Treblinka was razed to the ground in 1942. It was the Bulgarian Jews, Sephardis, decendents of the Jews chased out of Spain in the inquisition in 1492. In the book I recently read on Treblinka, based on the testimony of a survivor, he talks of Bulgarian Jews arriving in passenger trains and of simply not comprehending what was happening to them. He witnessed that they went happily to the gas chambers with soap and towels, honestly believing they were going for showers.

Emm
understood. My mother in law and aunt voluntarily went to Budapest during the war (from Czechoslovakia) because they thought they could survive better there! How ironic.

But yes, your book seems to have the correct information, at least up till April 1944.