Plunder of the Arts: the Monuments Men

The students and I are fascinated by the legal and moral issues raised by stolen art objects. Historically I have been most involved in Trevor-Roper’s era i.e the plunder of the Arts in the 17th cent­ury: English King Charles I, Gonzaga rulers of Mantua, Spanish King Philip IV, Queen Christina of Swed­en, Cardinal Mazarin in Paris, Leo­­pold Will­iam in Brussels and other winners and losers.

Recently I became very interested in The Rape of Europa 2008, a film directed by Richard Berge, Bonni Cohen and Nicole Newnham and based on the excellent book of the same name by Lynn H. Nicholas. This film about World War Two specifically paid homage to the Allies' Monuments Men, whose job it was to minimise the damage done by advancing armies and track down stolen works of art. Evacuation of The Louvre and The Hermitage, as seen in the film, was both well organised (by humans) and miraculous. 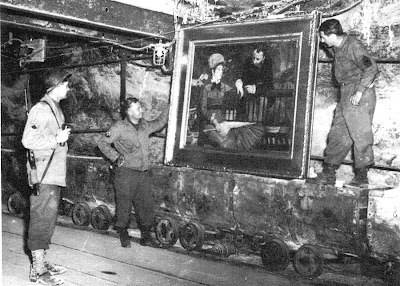 So I knew a lot about stolen art. But who were these Monuments Men?

Journey of a Bookseller blog discussed The Monuments Men by Robert Edsel. During WW2 a particular individual had felt that art was important and should be preserved. He wasn’t an important military man, and it wasn’t until he met like-minded people that it became possible to develop a small team.

The team gathered in Europe, but didn’t seem to be given much official protection or military funding. In fact The Monuments, Fine Arts and Archives “battalion” was hardly known. Eventually 345 men and women from thirteen Allied nations were trying to save art that hadn't been desecrated in the war zones, bringing back any objects that were transportable for preservation purposes. Eventually, they hoped to return the art to the rightful owners, if the works had been stolen from galleries. Or, if the owners had been individual Jewish families, it was probable that they and their children had been exterminated. The problem of locating the rightful owners' heirs, in this case, would be more difficult.

The Clever Pup blog added another important issue in writing about The Monuments Men: motivation. Frequently entering liberated towns ahead of ground troops, Monuments Men worked quickly to assess damage and make temporary repairs to paintings, sculpture and decorative art objects, before moving on through conquered Nazi territory with the Allied Armies. In the last years of the war, these museum directors, curators, art historians and educators tracked and located more than 5 million art and cultural items stolen by the Nazis. They were not soldiers, bombers, pilots, tank drivers or machine gunners! In fact some of The Monuments Men remained in Europe for years after other soldiers were demobilised, to facilitate and supervise the return of stolen works of art.

Appropriately I think, Running Rabbit blog notes that the work of The Monument Men isn't finished yet. By 2009 many of the stolen pieces have not yet been found and many other stolen pieces, located and clearly identified, have still not been returned. If the original owners were gassed or shot in 1939-45, their children are now elderly themselves. The grandchildren or grandnephews and nieces will soon be the only heirs.

Nicholas, Lynne The Rape of Europa: The Fate of Europe's Treasures in the Third Reich and the Second World War, Vintage, 1995 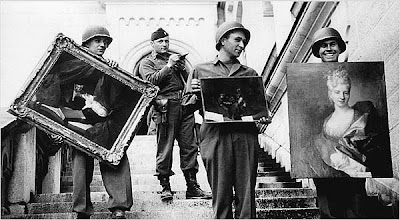 What a great post! I love learning about stolen art, and the Monument Men story is fascinating. I'm particularly intrigued by how many art pieces still need to be returned. I'm curious to read Edsel's book and learn more about that.

I would suppose that the returning process will be very slow, if it does happen at all. I hope that grandchildren and other heirs are interested in getting these heirlooms back.

I just read CultureGrrl's post from today, which ties into your discussion:

I thought you'd find it interesting, given the topic of your post. It discusses a new Registry for the Resolution of Claims for Nazi-Era Cultural Assets. It's pretty exciting news!

Many thanks M for linking the registry to my post. I would not have found the reference myself.

The purpose of this registry was reported to be:

1.provide information on claims made with respect to objects in AAMD member museum collections that have been resolved;
2.encourage openness; and
3.supplement information provided in the Nazi-Era Provenance Internet Portal, which was developed by the American Association of Museums.

The cases that have been resolved are, by definition, over. And supporting openness is ok, I suppose. But the really key issue will be to provide information in the Nazi-Era Provenance Internet Portal.

If some stolen art is in private hands, the registry won't have any impact. But if some stolen art objects are in museums, and the rightful owners (or their grandchildren) have the pre-1939 documentation to back up their claims, I believe progress really can be made.

The question of stolen Iraqi art isn't relevant to my post, but I'd imagine the issues are the same. Thousands of soldiers and dealers stealing precious cultural objects in the heat of the recent Iraqi wars.

Helen, my book giveaways normally last a little over a week, and this book has already been given away. I think you'd enjoy reading it. These soldiers worked real hard to try to save the artwork that was systematically being destroyed during the war. I wasn't aware there had ever been such a unit, so it was a real eye-opener!

This is an interesting post, Hels. I was not aware of the movies you mention, but I do know of the ongoing struggles over ownership of art seized by the Nazis. The role of museums and galleries is changing, in my observation, as the ethics of appropriation are challenged, not just in terms of recent wars but also imperial or colonial conquest over hundreds of years. I am thinking especially of native art and cultural artifacts that were stolen or "collected" and then sold or donated to institutions. One can certainly argue that preservation and public access are beneficent outcomes of this practice, but I am pleased to see that there are attempts being made all over the world to honor the original owners and creators of these works, through various creative solutions.

Mr. Edsel has produced a true gem by revealing this little known story about the Monuments Men to the world. The Monuments Men are an important element of art history of the era. Edsel truly honors the Monuments Men by preserving their stories in this book. The author is a gifted story teller that helps give each Monument Man (or woman) a distinct personality and character. This book gives a more in depth understanding of what the Monuments Men endured, continuing from the first book, Rescuing Da Vinci. This book is facinating and hard to put down. Robert Edsel is a true American hero and I'm happy to give this book my full endorsement.

ramidonya and Wes
this was and still is a fascinating story. Even now, 1.5 years later, the plunder of the arts during war has cropped up again in this blog.

This time it is in connection with archaeologist Sir Leonard Woolly and his role in the Monuments, Fine Arts and Archives Section of the Allied armies.
http://melbourneblogger.blogspot.com/2011/04/agatha-christies-greatest-mystery-her.html

Art Blog By Bob wrote a post called Can the Monuments Men Save the Art History Major? Ignore the post title and examine his art historical review of the film, The Monuments Men. It is well worthwhile.