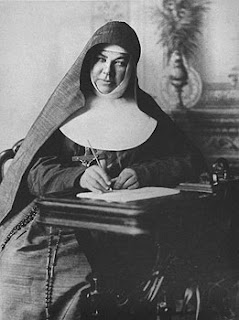 Sister Mary MacKillop
Penola is one of the oldest towns in south-east South Australia, some 5 hours drive from Adelaide. Although the population is tiny (1,400), the town has become famous for its association with Mary MacKillop (1842-1909), a nun who in 1866 established Australia's first school to cater for all children, regardless of their family's income or religion.

Why does Penola in particular celebrate the MacKillop connection and not Melbourne (where Mary was born and raised), Portland (where she worked as a teacher) or Sydney (where she died)? Penola was the place where Mary, in conjunction with Father Julian Tenison Woods (1832–89), founded the Josephites in 1866, the first religious order to be established by an Australian. Father Woods wanted the Sisters of St Joseph to teach in rural Catholic schools. 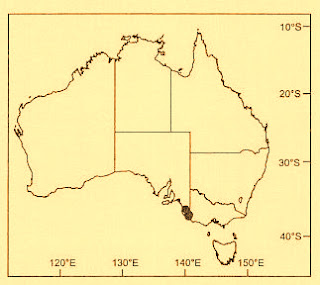 Penola is the black dot at the south of mainland Australia
A new stone building, St Joseph’s schoolhouse, was commissioned in 1866 by Father Woods. He had arranged a building loan through a local bank with parishioners putting their own names on the loan. One local parent designed the building; tenders were called; and a local builder got the nod. Too soon Father Woods had to leave Penola for the state capital, to become the inaugural Director-General of Catholic Education in Adelaide. Mary MacKillop remained to oversee the building programme.

In 1867 Mary and some sisters finally moved into the spacious, well-lit schoolhouse with pupils who were thrilled to have decent facilities. Sisters of St Joseph taught and lived in the schoolhouse, and by the end of 1869, the sisters were educating children at 21 schools in Adelaide and in South Australia's country towns.
In December 1869, MacKillop and several other nuns travelled to Brisbane to establish the order in Queensland. The Josephite Congregation expanded rapidly and, by 1871, 130 nuns were working in more than 40 schools and charitable institutions in both states (South Australia and Queensland). In 1872, Mary travelled to Rome to have the Sisters of St Joseph officially approved. While in Europe, Mary visited many schools; she was keen to study their teaching techniques.

When the new St Joseph's School opened in Penola 1936, the old schoolhouse became a parish hall. In 1989, following a lengthy restoration process, it was rededicated as the Woods-MacKillop Schoolhouse by Archbishop Faulkner. 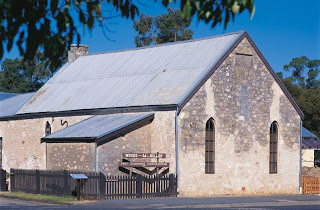 Woods-MacKillop Schoolhouse, Penola
The new St Joseph's Church in Penola, which was consecrated in 1924, stands on the exact site of the first St Joseph’s church, completed by Father Woods in March 1859. Apart from the Woods-MacKillop Schoolhouse and St Joseph’s Church, visitors can see the main display in town that relates to the new saint's story. The Mary MacKillop Penola Centre is a modern museum that tells the story of Mary MacKillop and Father Julian Woods through photos, memorabilia and displays. The only religious relic, a strand of Mary’s hair, is housed in a reliquary in the church.
Brendan Shanahan suggested that the Josephites appealed to Australians because they were pragmatic. The Josephites were a specifically Australian response to specifically Australian conditions. They moved independently, free of the bishops in distant Adelaide, and were given a fair bit of personal flexibility. It is no surprise to the Josephites that Sister Mary MacKillop was beatified by Pope John Paul II in 1995. Last year (2010) she was canonised by the Vatican, making her the first Australian to be declared a saint – St Mary of the Cross.

Although this post has been about Penola (in South Australia), I need to mention another important site. Since 1995 there has been a hotel called Mary MacKillop Place in North Sydney (in New South Wales) where guests can walk the journey of her life in the Museum and celebrate Mass in the Mary MacKillop Memorial Chapel. The chapel itself is quite historic since it was built in 1913 in memory of the nun who had died in 1909 in the nearby Josephite convent of North Sydney.

The chapel’s stained glass windows were installed in the Memorial Chapel in 1913 in memory of Father Julian Tenison Woods, co-founder of the Sisters of St Joseph. Mary's remains were placed in the tomb next to the altar in 1993. 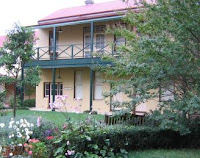 Hello Helen:
A most interesting account of Australia's first saint and the Josephite movement. We are endlessly fascinated by these pioneering women who against all traditions of the day established themselves in so many different walks of life. Mary Mac Killop was certainly one of these women.

She was gutsy, wasn't she? I know there was a great deal of nastiness about MacKillop and Josephites' success back in the 1870s, but the exact accusations have been lost in the murkiness of time. Here is the briefest summary.

Bishop Sheil selected Father Woods as director general of Catholic education but this appointment led to conflict over educational matters. In early 1870 one faction within the Church was so angry with Father Woods that they attacked the Josephites. Bishop Sheil excommunicated Sister Mary MacKillop over one incident or another, causing the Josephite schools to close in September 1871. MacKillop was of course banned from contact with anyone in her beloved church.

It was only on his deathbed in March 1872 that Bishop Sheil lifted the excommunication on MacKillop. Poor Mary MacKillop. Gutsy women often have a tough time in their careers. Or vocations.

I am always so impressed by the adventures for their belief. So daring. Wish I one day get to venture to Australia myself!

Kristen
so am I. For someone to be born to foreign parents, where the children had to leave school and support the parents financially, to find her vocation then have it taken away... all the more credit to MacKillop.

If Mary MacKillop had so much trouble with the Church, deservedly or not, why was she canonized?

Signer,
Since I don't know the answer myself, I'll be guided by the religious reporter from the Sydney Morning Herald.

She said that Mary, along with countless other Catholic nuns, led social movements, worked to establish schools, orphanages and hospitals and served the sick, the poor and those on the margins of society. Often they were motivated by a profound commitment to community, often on impossible budgets, in difficult physical and political conditions, and with little institutional support.

But more was needed. Before a person can be canonised, the Catholic Church needs to recognise two miracles. The Vatican agreed that Mary cured a woman of leukaemia in the 1950s and a woman with cancer in the mid 1990s.

What a mixed history the Catholics have in your country. So good to hear of someone positive and pioneering.

I wonder if that was because Mary's parents were Scottish and not Irish Catholics. Although their financial situation in Australia seems to have been dire, Mary's parents were reasonably educated themselves and they wanted the children to be educated. This was a hardworking family, not rabble rousers or drinkers.

I have linked it to my post which touches on her time in Brisbane:
http://www.yourbrisbanepastandpresent.com/2010/10/villa-maria-hostel.html

Thank you :) Before writing this post, I had not known that Mary MacKillop had an important presence in Queensland.

If she was given the task of developing Catholic schools by the Bishop of Adelaide, who funded the move into another state? Yet clearly in late 1869 Mary MacKillop and five of the Sisters of St Joseph did indeed spend time in Brisbane (and Maryborough) opening schools.

She must have had enormous energy.

I think whatever good one may be trying to do, there will always be people who will badmouth, denigrate, calumniate and derail ones efforts. One almost has to be saintly in order to persist with one's endeavours and try to reach one's goals in the negative environment of envy, politics, nastiness and plain old laziness of others.
Good on Mary McKillop for having the strength and courage to achieve what she did. She should be remembered as the good, pioneering spirit she was, saint or not.

thanks for the comment. The students and their parents loved the schools, yet there was something rather nasty about the way Mary MacKillop and her Josephite teaching sisters were treated by the authorities. You suggested "envy, politics, nastiness and plain old laziness of others".

I am not sure it was a problem peculiar to the Catholic Church since her religious patrons eg Father Woods, were very supportive.

I am much more inclined to see gender issues at work. These were active, ambitious women who threw themselves into the educational task, travelling widely and independently according to need. I can imagine the male authorities puffing pipes in their studies, saying to each other "You better watch that one, Fred. I hear she is a drinker and has a sharp mouth, and will cause you endless trouble".

Can you give a bit of comment on your response to Hermes? It could be read, and I'm afraid its the way I read it, as extraordinarily negative about Irish Catholics, suggesting they were uneducated, rabble rousing drinkers without aspirations for their children's education and neither positive nor pioneering.

Thanks for picking up on that point. Normally people who talk about the mixed history that the Catholics have in Australia are thinking of Ned Kelly or Henry James O’Farrell. If I was wrong, I will apologise to Hermes straight away.

Rather than righting injustices through the barrel of a gun, Mary MacKillop and her family threw themselves into serving the poorest and most marginalised of Australian families. She was heroic.

And there I was thinking I was being positive about religion for a change. I've relatives and friends who are Catholics and I definately admire this woman for her pioneering spirit. Not all Catholics behaved so well but then they are hardly unique in that!

This was fascinating - great blog - enjoyed looking about.

That is interesting! I did not know there were any saints from Australia but then again, I don't really understand the whole process of canonisation.

Jo and Emm
the process of canonisation is mysterious to me too. And not because Mary MacKillop didn't fully dedicate her life to godly work and to impoverished families. She did.

But during her lifetime she was considered by church authorities at the time to be too independent, too mobile, too uncontrollable, too free thinking. Her reputation was restored to its rightful place only during the decades since Mary's death in 1909.