Berlin Philharmonic and the Third Reich

The Berlin Philharmonic, founded in 1882, established its reputation when guest conductors like Richard Strauss, Gustav Mahler and Edvard Grieg were invited to Berlin. For this post, I am particularly interested in its history as the so-called orchestral wing of Goebbels’ propaganda machine, from 1933 until the end of World War Two. 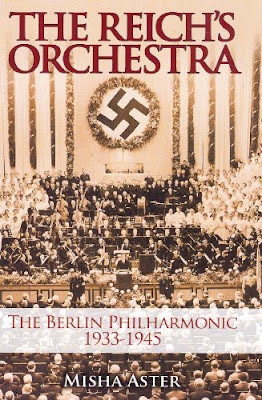 Nothing was accidental in cultural decision-making. The National Socialists regarded art, and especially music, as an expression of Germany's long and glorious culture, capable of fostering great national pride and a powerful sense of national unity. Because they regarded themselves as guardians of their nation's cultural heritage, the Nazis opposed socialist and modernist trends in all the arts and viewed the culture of the Weimar period with reactionary disgust. Their response stemmed partly from conservative aesthetic taste and partly from their determination to use culture as a prop­a­ganda tool.

The Orel Foundation put it succinctly. Germany's leaders planned to mould their fellow citizens along approved cultural lines. Clearly they regarded the Berlin Philharmonic and its conductor as an essential component in promoting a positive image of German culture. Hermann Goering controlled the Prussian state theatres, including the Staatsoper. Joseph Goebbels, Minister of Public Enlightenment and Propaganda, administered the Berlin Philharmonic almost by decree. Both ensembles depended on government funding, but loss of financing was not the worst punishment available for not toeing the party line!

The relationship between music-loving members of the Nazi party and the Berlin Philharmonic was secured. The orchestra served as formal representatives of the Nazi regime, providing the musical programme for the Nazis’ party congresses in Nuremberg and the Olympic Games, and giving regular concerts for other Nazi organisations. The musicians were the only able-bodied men in Germany to be fully exempt from military service - a huge privilege! But the cost was their loss artistic independence and their involvement in propping up an obscene regime.

When the Nazis came to power in 1933, 10% of the orchestra were Jews or were Christian men married to Jewish wives. Those who were themselves Jewish were expelled from the orchestra and made their way, as quickly as possible, to Britain and France. Some of them later travelled on to the New World.

But musicians were not the only people affected. The great compositions of Salomon Sulzer, Jaques Offenbach, Erich Korngold, Gustav Mahler, Arnold Schönberg and Felix Mendelssohn were banned throughout Germany and eventually Austria, even though some of these composers had only the remotest connection to Judaism.

The Jewish conductor Bruno Walter (1876–1962) left the Berlin orchestra for Austria in 1933. At the time of the 1938 Anschluss, Walter happened to be recording music in Paris and fortunately was offered French citizenship. 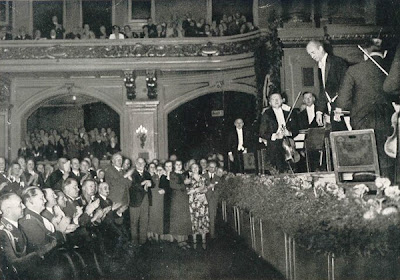 Furtwängler bows to a delighted Hitler and Goering, 1940

Wilhelm Furtwängler (1886–1954) was the German conductor and composer who was given the responsibility of leading the orchestra in 1922. People far more musically educated than myself totally supported his reputation as one of the leading conductors in Europe. The question remains, however, why did he remain in Nazi Germany, even though he was not a member of the Nazi party? And how did he react to the many Jewish members of his orchestra, from 1933 on?

There were plenty of stories that told of his distaste for the Third Reich. According to Fans in a Flashbulb, his championing of composers labelled by the Nazis as degenerate, like Schoenberg, and his protection of Jewish musicians were risky and impressive stances. The six Christian musicians who had Jewish wives managed to stay in the orchestra, largely due to Furtwangler’s refusal to obey Goebbels’ orders. Furtwangler even insisted that Jewish wives be allowed in the concerts to hear their husbands perform. Yet the fact that he stayed in Germany until 1944, conducting benefit concerts for the Nazis and receiving their protection and praise in return, led to the severe diminishing of his international reputation. At his denazification trial, Furtwängler made an impassioned but rather pathetic defence of his actions during the war.

Herbert von Karajan (1908–89) was in a different situation. Firstly in 1935, von Karajn actively applied for membership in the Nazi Party (something Furtwängler never did) and expected that his career would be given a significant boost. Secondly Karajan was 22 years younger than Furtwangler and didn’t make his debut with the Berlin Philharmonic and the Berlin State Opera until 1938. Das Wunder Karajan had fewer moral choices to make since he established his career under Nazi patronage and didn’t become the Principal Conductor in Berlin until well after the war (1954–89).

And their choice of music was interesting for their pychology. Wagner's final opera "Parsifal" was actually banned by Goebbles in 1944 and apparently Bach remained quite popular in Nazi Germany, and performances of Verdi and Mozart operas wre still popular despite being officially frowned upon.

Great historical topic Hermes... even for someone as musically uneducated as me.

I suppose Bolshevik, Jewish, socialist and gay composers were totally out. Everyone else MIGHT be acceptable, if they were politicised, manipulated or appropriated for the Nazis' own political advantage.

I haven't read Levi's book "Mozart and the Nazis: How the Third Reich Abused a Cultural Icon", but apparently Levi describes the ambivalence of Nazi cultural decision makers. Puccini and Verdi may have been subject to a similar appropriation.

Why just the Berlin Orchestra and not all the other professional groups throughout Germany?

This is a great topic but I suspect complicated.

Not my expertise either but I found this:

Off track perhaps but this really moved me:

You do raise the most fascinating issues.

As propaganda minister, Goebbels had responsibility for every orchestra, theatre, art gallery and printed product in the nation. Have a look at the great photo that Hermes refers to - of Adolf Hitler listening to Wagnerian conductor, Dr C Muck, and the Leipzig Orchestra. HUGE!

I do suppose, however, that the Berlin Philharmonic Orchestra was
Germany's proudest cultural product on the international stage.

It goes to show that no system, no matter how ideologically based and how well controlled from the top, has all the answers. Partially it was _personal_ eg Hitler hated modern art and music; Goebbels liked it. But even the _principles_ that they operated under were ambiguous or changing or not applicable to different parts of the community.