I have known a great deal about the German Oskar Schindler, ever since I became close friends with the daughter of a Schindler-Jew in 1965. And I knew even more about the Swede Raoul Wallenberg because he was the greatest hero of my parents’ generation. Even the American Varian Fry and the Englishman Nicholas Winton became familiar names amongst Jewish historians of the 20th century. But Irena Sendler?

Irena Sendler (1910 – 2008) was a Polish Catholic social worker who served in a Polish resistance organisation in German-occupied Warsaw during World War II. The daughter of socialist and medical parents, the young woman was already committed to saving human life wherever possible, but that seemed like an improbable dream in Nazi-controlled Poland. 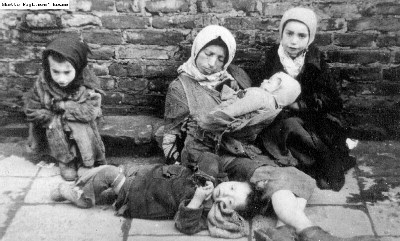 Jewish children in the Warsaw Ghetto, 1942

Zegota, the Council for Aid to Jews, was already organised by the Polish underground resistance movement. But Sendler, who was part of Zegota, had one big advantage. The Warsaw SocialWelfare Department’s canteens used to provide meals, financial aid and other services for orphans, the elderly and the destitute. By 1942 Irena could ensure that the canteens could also provide clothing, medicine and money for some Jews whom she registered under fictitious Christian names. And as an employee of the Welfare Department’s Epidemic Control Section, she had a special permit to enter the Warsaw Ghetto to check for signs of typhus, something the Nazis feared would spread beyond the Ghetto. She and her colleagues wore nurses uniforms (see photo below).

Using these typhoid-focused inspection tours of sanitary conditions, Sendler and a team of other brave Catholic women smuggled out babies and small children in ambulances and public transport, wrapping the toddlers up as parcels. She also used the old courthouse at the edge of the Warsaw Ghetto as one of the main routes for smuggling out children.

As soon as it was safe to do so, the rescuers found heroic Polish Catholic families who would take the Jewish children in, as if they were their own nieces and nephews. When they couldn’t find families, Sendler used the Sisters of the Family of Mary orphanage in Warsaw, or various Roman Catholic convents more distant from the capital city. It is estimated that the team saved 2,500 Jewish children by getting them safely out of the Warsaw Ghetto, against all odds.

The project only came to an end in 1943 because Sendler was captured by the Gestapo and sentenced to death. But she had taken precautions. She had carefully noted, in coded form, the children’s original names and their new identities. She buried the records for safe keeping, hoping she could one day reunite the children with their true parents. Alas not a single Jewish mother or father survived the war.

The Polish Genealogy Project has a wonderful photo of Irena in a Social Welfare Department car, during Warsaw’s 1st May Parade in 1948.

Again against all the odds, Sendler survived into old age. Quite rightly, she was recognised by Yad Vashem in Jerusalem as one of the Righteous among the Nations in 1965. Sadly Poland wouldn't allow her to travel to Israel until 1983; then she could finally be acknowledged before the entire Jewish world. Clearly things have changed in Poland. Joedresch's blog noted that Irena Sendler was awarded Poland’s highest distinction, the Order of White Eagle in 2003, and she won the Jan Karski award for Valour and Courage in 2003. This very very old lady was officially designated a national hero in Poland and schools have been named in her honour.

Sendler was nominated for The 2007 Nobel Peace Prize; eventually it was awarded to the Intergovernmental Panel on Climate Change and Al Gore, which was as it should have been. But what a shame that Irena Sendler wasn’t nominated earlier. Like Winton in Britain, they waited until she was 100 years old before giving her the recognition she so richly deserved.

Two films have been made, celebrating her life. Irena Sendler, In the Name of Their Mothers 2003 was a documentary based on the last interviews given by Irena Sendler before she died, and interviews with some of the children she saved. And The Courageous Heart of Irena Sendler 2010 is a dramatic recreation of the events of 1942 and 1943.

A book called The Other Schindler: Irena Sendler was written by Abhijit Thite and appeared in 2010. The publishers used an imaginative method to release the book; they held their launch next to the tree planted by Irena Sendler herself, along the Avenue of the Righteous in Jerusalem. 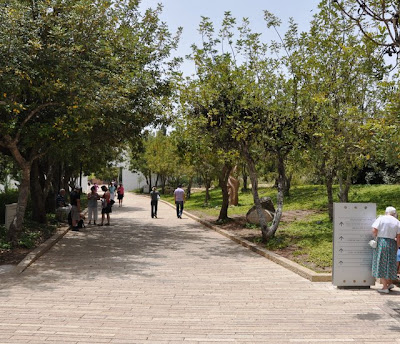 She was an extraordinary woman. The drama broadcast here about two years ago was excellent. Thanks for keeping her in the public eye.

This woman's story is new to me. Such bravery, such compassion.

At least it is a counterpoint to the fact that the Pope and the Catholic church itself did little to protect Jews during that awful period.

What a shame that so many years passed before Irena was recognised for her heroism.

I am NOT an expert historian of the second world war, but even so, I would expect to have heard of someone who was young, brave and very effective. Nothing! What did you hear or see two years ago?

You mentioned the film The Courageous Heart of Irena Sendler. It will be shown at The Jewish Cinema Festival this month, in both Sydney and Melbourne.

Irena Sendler said in her interviews that she could utterly depend on the nuns in the Catholic orphanages and convents. Without them, even her team's best endeavours would have failed.

Mott,
exactly! The film The Courageous Heart of Irena Sendler was what promoted the discussion in the first place. Whether it turns out to be a good film or not, the historians have done a great job bringing the story to our attention.

Well, the film "The Courageous Heart.." was based on a play based on a student-instigated project here in the States called Life in a Jar. It shows you what students can do. Until then she wasn't well known outside of Israel & a few other places.

Really, though, I wouldn't blame the Nobel Committee etc. She was a reluctant (but gracious) guest of honor at her own "party." She was honored in the mid60s in Israel & in Poland later on. She lived under the radar, by choice she said.

I had the privilege to meet her (briefly) in Poland before she died.

Giulia,
Thanks for that. I think the history of discovering, writing and publishing a long gone story is almost as interesting as the original history itself.

New to me - what a wonderful story. Truly one of the blessed.

Hers is a wonderful story and new to me as well - thanks for telling it.

I am always overwhelmed by the horrors we humans visit on each other and by the creative bravery of some like Irena Sendler.

One issue I did not mention in the post. Irena's first marriage broke up soon after her heroic behaviour in the Warsaw Ghetto and in the Gestapo prison. Was this an unintended consequence of her rescuing other peoples' children and putting her own family at risk?

I've often wondered in my safe middle-class way what I would have done. No way to answer it, but you have to wonder if I could do more than say the right words.

Thanks for sharing her story! Her inspirational acts need to be shared so we can all imitate her deeds when we face times of need.

I am looking forward to the new documentary on her titled "In the name of their mothers" it looks excellent.

Irena is featured as hero of the week on our blog, you all might be interested to read more about her at:

MoralHeroes,
many thanks.
Irena Sendler was recognised by Yad Vashem in Jerusalem as one of the Righteous among the Nations in 1965. She will never be forgotten.

She will or has received better recognition in Heaven where it is truly appreciated, then here.

That is so often the way, isn't it? A truly fine and moral human being isn't appreciate in life as they deserve. Fortunately for Sendler and for the world, Sendler's years of heroism of sacrifice have been celebrated by the children she saved, by Yad Vashem in Jerusalem, by the Nobel Prize people etc.

Tragically Poland did not recognise their own heroine until 2003 when she was way too old to enjoy the event. We can only hope that her portrait soon goes onto Polish bank notes etc.