My husband was born in 1947 in Czechoslovakia. My Czech father-in-law lost every single family member during the war; my Czech mother-in-law’s family survived marginally better. Clearly I have a vested interest in this story. 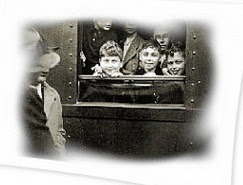 In 1938 Nicholas Winton (1909-), then a young office worker in Britain, was asked by a friend to travel to Prague where he would find an exciting and worthwhile project to get involved in. The BBC said his friend was Martin Blake, a master at Westminster School and an ambassador for the British Committee for Czech Refugees, which was helping adults escape. War was imminent. Only two months earlier, Hitler's troops had occupied the disputed territory of Sudetenland, on Czechoslovakia's border with Germany. 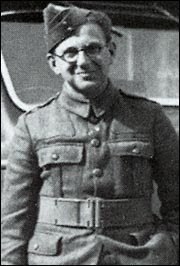 In other countries, refugee organisations had begun organising the Kindertransports, long trains that could carry thousands of Jewish children out of central Europe. It was not clear why Czech­os­lovakian children weren’t being rescued, but once Winton visited refugee camps outside Prague, he quickly realised that there was a mission with his name on it.

People had warned him that the British government would never allow refugee children to flood into Britain, especially since there were no organisations in London and in Prague to deal with virtually orphaned children. People also warned him that Jewish parents in Czechoslovakia were unlikely to send their precious children away. But in both cases, people were wrong. 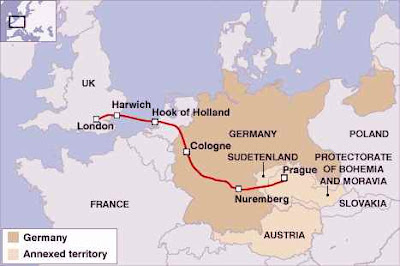 BBC map of the trip from Prague to London

Winton immediately started raising money to save the children, and on his return to Britain, began finding homes and organising visas for them. This was not an easy task since Londoners, especially children and new mothers, were being evacuated OUT of the city, into the safety of the countryside in 1939.

After recruiting a team to organise the train trips, Winton returned to the UK to obtain permits for the children and to find foster homes for them. Nicholas raised enough money to give each foster family £50, hardly enough to look after the children until the age of 17. But decent families did respond. Winton found homes for all 669 Jewish children.

Nosey Parker and Make A Difference In The World – Be The Change! blogs noted that the only other country that would take these children, apart from Britain, was Sweden. Some of the children were indeed sent to foster homes in Sweden.

Throughout early 1939, Winton trains carried 669 children to safety. Parents stood at the railway station in Prague, bravely waving goodbye to their babies, presumably for the last time. Only one planned trip failed. The last train, with 250 children on board, was due to leave on 1st of September 1939, the day war broke out. At the last minute German troops intervened; the children were taken off the train and never seen again. They, and most of the families left behind, were eventually exterminated.

Sir Nicholas Winton’s heroic acts were unknown, until his wife Grete found an old scrapbook in an attic, detailing his mission forty years after WW2 ended. I find it incredible that he had never told his beloved wife the story!

Lancaster Unity blog showed how Survivors gathered to pay tribute to 'British Schindler' (although the comparison between Schindler and Winton seems to be unfair to Winton). The Czech Railways ran a train so that the Winton children could retrace their 1938 journey. 100 people travelled between Prague and London; among them 20 of Winton's Children, now with children and grandchildren of their own. These now-elderly Winton Children were determined that their own grandchildren should under­stand how much they owe to an otherwise ordinary man. What is even more amazing is that Winton, now 100, stood at the platform at Liverpool St station to welcome them.. again.

Christina’s This and That found a powerful film detailing the story of Winton's Children called “All My Loved Ones” by David Silberstein. And schoolchildren in the Czech Republic will see Matej Minac's film called "Nicholas Winton - The Power of Good." 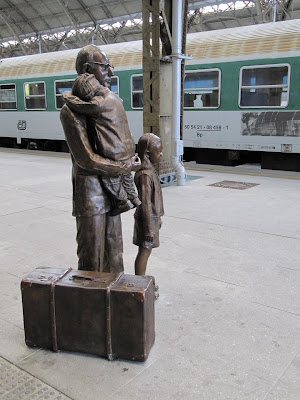 In retirement, Winton continued to live in Maidenhead and to raise money for worthy causes; the Borough of Windsor and Maidenhead is 42 ks to the west of central London. In 1983 he won an MBE for his work with the Abbeyfield Housing Association, whose retirement village in Windsor was appropriately named Winton House.

There is even an art connection or two. Since 2003, there has been a bronze statue outside Liverpool St station, perfectly depicting the children who were rescued. A thousand ks away, the new Statue of Sir Nicholas Winton in Prague shows a bronze statue holding two of the children he helped escape. The two sculpture pieces rightly stand in the two railways stations where the epic rescue project started and ended. And in 2010, a bronze life sized statue was placed on the platform at Maidenhead railway station. The sculpture showed Sir Nicholas reading a book that contained images of the Jewish children he saved. And it showed the trains he used to transport them from Czechosl­ovakia to Britain in 1939. 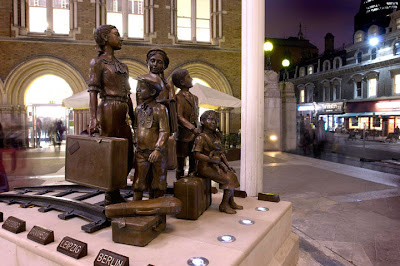 History Today magazine (March 2004) has a wonderful review of the rescue programme called Kindertransport: terror, trauma and triumph. Written by Caroline Sharples, the article mentioned Sir Nicholas Winton but focused largely on what happened to the children once they found foster families in the UK.

Thanks so much Helen

I did not know this story at all-wow! can you imagine his wife finding out - like me right now -in shock! pleasant shock!

There is such a similar statue in front of the station in Berlin as well. Have a good one, Czech Vera

Lovely story - and I didn't know about the sculptures: I'll look out for the one in Prague when I next visit the station, which I do, quite often.

Have you read W G Sebald's novel Austerlitz, which is about a character who, having arrived in Britain on the Kindertransport and grown up here, rediscovers his Czech roots? It's the most haunting book, and is full of evocative descriptions of buildings.

It is so nice that such heroes are recognized for their wonderful deeds. I wonder how many of these children survived to tell their stories.

It is unimaginable what people have to go through at times of war and my heart always goes out to the very young.

Nicky Winton - I can't tell you how much this story moves me. I tried to explain it to someone and was crying too hard to finish.

An older Canadian reporter (Joe Schlesinger) from the CBC was one of the kids he rescued. He put together a documentary on Nicholas Winton including a bit of what looked like "This is your life" The host asked Nicky Winton if he would like to meet one of the children he had saved and the whole audience stood up. It was very moving.

Wrote a piece on the polybore blog on this that took exception to the "Schindler" tag being applied to Sir Nicholas Winton.

Schindler was a complicated and controversial character.

I was interested to read your comments about the statue of Sir Nicholas Winton on your Melbourne blog.

I also live in Melbourne. My husband and I were on the Winton Train, as my mother was one of the original children who was evacuated from Czechoslovakia. We were the only two from Australia on the Winton train.

We watched the unveiling of the statue on the Prague station before the train departed. It was very moving and the whole trip was amazing, as well as emotional.

Thank you for raising awareness about Sir Nicholas Winton and his deeds. It was very special to meet him, when the train arrived in London.


Susan,
my husband is Czech but he was born just after the war. And like Mrs Winton, he had never heard this amazing story before.

There seem to be children and grandchildren of Winton survivors in Canada as well, as Clever Pup noted. I am still impressed with the eternal nature of this story.

Sir Nicholas is now also honoured at Maidenhead station, as he lives in the town.

David, thank you so much. I immediately went back into the post and added the 2010 unveiling.

The film about the young British hero was presented by the Czech Deputy Prime Minister/ Foreign Minister and and the Defence Minister. Former Czech president Vaclav Havel was also present at the premiere.

Some of the children Winton saved attended the premiere of Minac's film in Prague's Congress Centre Thursday. Ten of them also appeared in the film.

The film Nicky's Family was equal first for the best documentary at the Montreal Film Festival. It has also won two other awards. It had its' premiere in Prague and will soon be released in the USA. I wish it would come to Australia.

good to see you - it continues to be a great story. Winton attended the opening of the film in Prague in Jan 2011.. at 101 years of age! Amazing.

Menemsha Films is already committed to showing in the USA as you said, and in France. Apparently negotiations are now underway for distribution in Australia and Germany.

I am still fascinated by this story. Thank you for your comments. Today I added a great reference to an article in History Today magazine (March 2004).

Sir Nicholas Winton was 29 when he arranged trains to take the children out of occupied Czechoslovakia and for foster families to meet them in London.

In October 2014 the 105-year-old was given the highest Czech honour, the Order of the White Lion, by the Czech president during a ceremony at Prague Castle.

In a clear speech, the man in the wheelchair thanked the British people who gave the children homes. And the enormous help given by so many of the Czechs to try to get the children out.

I am delighted to hear that the Czechs have honoured Winton with their nation's highest honour. But why did they wait till the man was 105?? The children he saved turned up to the award ceremony in Prague, but they too were in their 80s and were a bit frail!

BBC News said that Sir Nicholas Winton, who organised the rescue of 669 Czech children destined for Nazi concentration camps, has died aged 106. Sir Nicholas, then a stockbroker, arranged for trains to carry Jewish children out of occupied Prague. He died on the anniversary of the departure of a train in 1939 carrying the largest number of children - 241. He died peacefully in his sleep at Wexham Hospital, Slough.

The 5th commemoration of the World Kindertransport Day was held at Sydney’s NCJWA Council House. Harry Merkur told the story of his grandfather Herman Merkur, a Kapellmeister from Vienna who was murdered in Auschwitz. Herman Merkur’s violin and his original songbook survived the war because one family member had kept both but they were not discovered until last year. As the Australian Chair of the Kindertransport Association, Janet Merkur summarised the history of the Kindertransport and her family connections to it.

At the first reunion of Winton children in 1988, they said that the survivors remained in Britain, or emigrated to Israel or Australia after the war. So it is most appropriate that Australia had a close connection to World Kindertransport Day.

Hel Have you read the Marie Schmolka story in History Today (December 2018)? She was a woman, a Czech, a World War Two heroine, and a mentor for Nicholas Winton ..you cannot get much better than that.

I loved the Winton story and I will love Schmolka story. Thank you.