To entice the western province to confederate with Canada, British Columbia was promised a railroad linking it to the east within 10 years. So by 1871, four years after Canada was given its independence by Britain, British Columbia did indeed join the Canadian confederation. 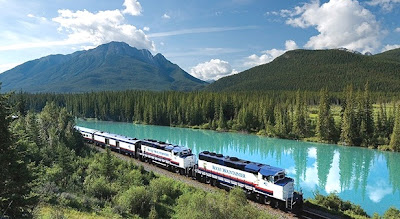 Meanwhile the railway was being built, often with Chinese workers brought north from California. One crew built from the east across the Prairies and another crew built from the West, up the Fraser River. It is difficult to imagine the hardships these early surveyors and builders endured, especially in the snow and across a very rugged landscape. Yet succeed they did, although it took 14 years instead of 10. In Nov 1885 they set the Last Spike of the Canadian Pacific Railway! It was a miracle of railway engineering.

The first trans-continental railway train arrived in July 1886 and soon the railway extended into Vancouver. The city of Vancouver, which incorporated in 1886, became the country’s gateway to the Pacific; the province of British Columbia could ship its natural resources east. 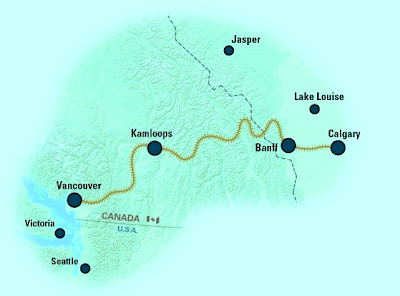 Map of the trip (all train except for Banff-Calgary)

The Rocky Mountaineer services has taken passengers  through some of Canada's greatest scenery since 1990. There are four Rocky Mountaineer routes, largely from Vancouver via Kamloops to Banff or Jasper and finally to Calgary. Spouse and I selected the Classic First Passage to the West Vacation, a 4-days and 3-nights trip that we started in Vancouver, continued via Kamloops and Banff, and ended in Calgary. This trip is available April-Oct.

In the Gold Leaf Dome Coach, guests sit upstairs in a glass cabin to watch the scenery. Passengers enjoy gourmet meals which are served on crisp linen, in the dining room on the lower level. In the Red Leaf carriages, boxed lunches are served in the passenger’s own seat. And because the train travels only during the day, there are no sleeping cabins on board. Each evening, passengers are picked up from the local railway station and taken to hotels. This is different from other tourist trains eg The Trans Siberian Railway. 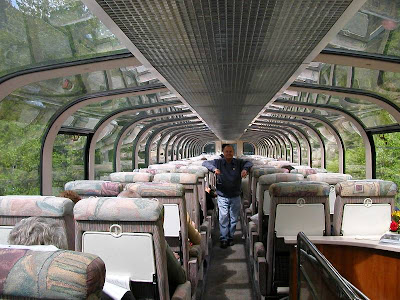 We started the trip on the west coast of Canada. Vancouver developed rapidly from a small lumber mill town into a metropolitan centre, following the arrival of the national railway in 1887. The port became more significant and busy after the Panama Canal was completed. This reduced freight rates in the 1920s and made it viable to ship prairie grain exports west.

Vancouver is renowned for its scenery and has one of the largest urban parks in North America, Stanley Park. Encircled by high mountains, the city is filled with hiking trails, large green spaces and gardens. We loved Vancouver's beautiful beaches and harbour. Our tour visited the BC Place Stadium, which was built for Expo 86. It is the world's largest air-supported domed stadium.

In 1867 Gassy Jack Deighton sailed his canoe to Vancouver’s tiny waterfront. He opened a shack saloon and with the patronage of the nearby mill workers, Gassy's Town soon became known as Gastown. By 1873 Gassy Jack had built a grand hotel overlooking the very fine Maple Tree Square; then shops, hotels and many brothels appeared. Modern Gastown retains many of the oldest buildings in town and has a distinctive and integrated architecture. 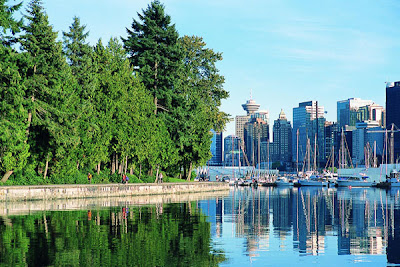 Next morning, we boarded the train as it made its way through the large farming properties along the South Thompson River, the impressive landscapes of the Fraser Canyon, the very tricky Hell's Gate where a strongly running Fraser River funnels into a narrow gap, and the fertile fields of the Fraser Valley surrounded by snowy mountains.

Europeans arrived in Kamloops in c1811 to set up a fur trading post, and then got involved in trade, industry, the railroad and ship transport. The Gold Rush brought wealth and a large influx of people searching for a better life, but it was also a bit wild - stagecoach holdups and cattle rustling. In 1893, Kamloops had 1,000 people; today it is a population of c86,000 and growing, based largely on its role as a major cattle ranching centre and as a transport hub.

In the evening, we train travellers experienced frontier dining with the Lumberjack and Train Robber Musical Show, then slept in Kamloops. 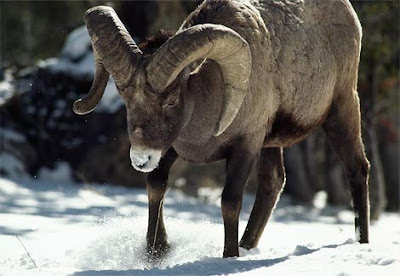 Back on board, watch out for the region’s fauna and flora. Animals never seen in Australia wandered near the train tracks, so the driver slowed down for all photographers: cougar, black and grizzly bears, moose, elk, bighorn sheep, wolves, lynx and caribou on protected land. Passing Mount Robson, the Canadian Rockies’ highest mountain, the train followed the route of the Overlanders, those C19th homesteaders who tried to settle this rugged region.

Banff's history is connected to the expansion of railways across Canada. In 1885 the federal government sets aside a reserve surrounding the hot springs, recently discovered. Two years later, The Canadian Pacific Railway Co. and the federal government cooperated in promoting the area as an international resort and spa. The Canadian government passed the first National Parks Act during WW1 and people flocked to Banff Fairmont Springs Hotel 1888, in the Scottish Baronial style. As did we. 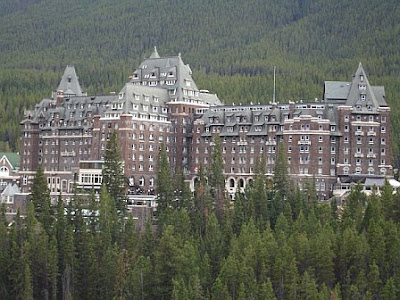 For the day in Banff, some of our fellow travellers elected to fly on a helicopter ride, high over the Canadian Rockies. Others chose the optional excursion to Sulphur Mountain for a gondola ride with spectacular views of the mountains and of the Bow River and Bow Falls. I elected to walk through Banff's wonderful boutiques.

If you select the Banff option, then you miss the Lake Louise and Jasper options, with their steep gorges, snow-capped mountain ranges, exquisite lakes and natural beauty. This image of beautiful Lake Louise therefore comes from a friend's trip and not from my own. 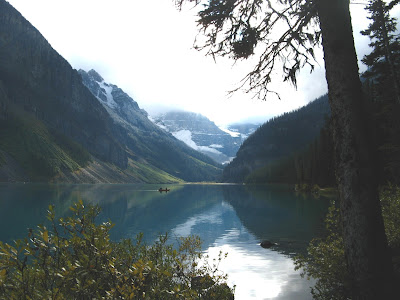 From Banff National Park, we were driven east by bus to Calgary, leaving the majestic Rockies behind. In 1947 a major oil discovery was made near Edmonton. As more discoveries were made, a big share of the oil money flowed to the provincial government. Jobs were created in the petrochemical industry, as well as in construction, surveying and transportation. Edmonton and Calgary emerged as prosperous cities of business and finance; immigrants flowed into Alberta; buildings went up as fast as they could be built. I have only been to Calgary twice, both times during its most popular tourist attraction, the Annual Stampede. Stampede Park was bought from the government in 1889 and The Stampede itself started in 1912. For ten days every July, it features a rodeo, chuck wagon races, cowboy food, parades, music and Indian culture. Now I personally do not identify at all with cowboy culture, but it is quite a celebration. Pubs and hotels have their staff dress up as cowboys and girls.

Calgary’s 2 city halls are amazing. The Old City Hall opened in 1911 while the 14-storey, triangular Calgary Municipal Building opened in 1985. In 1966, oil man Eric Harvie gave his vast collection of historical material to the people of Alberta, and the Glenbow-Alberta Institute was formed. Today, Glenbow is western Canada's largest museum, with three floors of exhibition space. Most impressive are the First Peoples’ artistic traditions and material culture; so are 100,000 objects which provide glimpses into the lives of those who explored/settled western Canada from the late 1800s on. Glenbow's art collection naturally focuses on the prairies. The Pengrowth Saddledome is the home of the Calgary Flames in the National Hockey League and the site of the 1988 Winter Olympics. 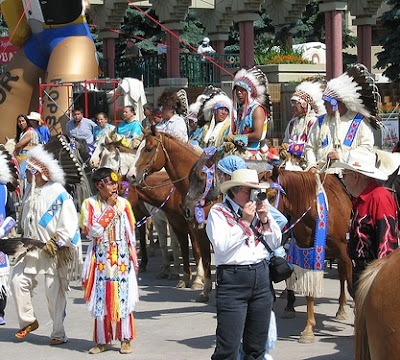 wonderful post Hels! I'm becoming increasingly enamoured of Canada. I have relatives in Calgary and hope to visit them someday. Banff's looks amazing!

Oh I am too. When my mum's family left Russia, half came of the cousins came to Melbourne and half went to Winnipeg. So I have an in-built excuse to fly across to Canada for each reunion :)

My parents went on this train and loved it, and Canada. Fantastic scenery but looks cold.

I see the foothills of the rockies daily and never tire of them, but have not taken a Rocky Mountaineer trip. It sounds like fun.

The landscape, animals, plant life etc are fabulous for everybody, local and tourist alike.

But the running commentary, which I loved, is geared for tourists who know next to nothing about the history of Canadian federation, British Columbia and Alberta.

I loved the canadian trip, except for the bus shuttle from Banff to Calgary. Why bother going on a train trip if part of it is by bus.

Trainman, good question. I have added a map to the post, to show what proportion of the Vancouver to Calgary trip is not by train.

mrs tff and I were lucky enough to stay at both the Empress and the Banff Springs on a visit to Canada.

I played the Banff Springs golf course where the scenery is so astounding you don't worry about your score!

Unfortunately a climber fell to his death from one of the nearby mountains while we were at the Banff Springs and the resultant helicopter and ambulance activity was a reminder of the dangers that can arise in the wilderness.

And, I had to spend most of the early morning bus journey to Calgary talking to the bus driver, as he was in danger of falling asleep at the wheel!
tff

tff,
it was so dangerous crossing the mountains and working on the railway that the sources say at least 600 Chinese workers died on the job :( What a nightmare.

By the way, I asked my golf-passionate spouse if there ever was scenery so astounding that he don't worry about his score! He said no, but he wants to be playing on the Banff Springs golf course on the day that he dies.

Amaizing nature, I'm living in Poland for me Your landscape is incredible!!! All the best;)

Sue
The Canadian Rockies were something TOTALLY different for the Australians on the trip. We were pretty stunned and amazed. As you would be too, if you get to Canada. Mind you, I am not familiar with the Polish landscape

Excellent descripton of your wonderful trip. I was wondering whether you could tell me about the accommodation for the overnight stay in Kamloops. We are going on the Rocky Mountaineer in May. But there is not much information available about the arrangements for that night.

Joan
the bus picks all travellers up at the Kamloops railway station and takes them directly to the motel. You don't have to do any decision-making.. it is all pre-booked for you. It is an average motel in every sense, except that the fish buffet and the Lumberjack & Train Robber Musical Show are great fun.

You will have a terrific time throughout the trip :)

The Canadian Pacific Railway was the most ambitious railway project in the world. It was going to cost a fortune. Tracks had to be pushed through the rock and muskeg of northern Ontario, across the prairie, and through the mountains. No one even knew if passes suitable for railway lines existed in British Columbia's mountain ranges. For years, surveyors had scrambled up and down the slopes and valleys in search of a route. The obstacles seemed insurmountable.

That is indeed the well-known photograph, sometimes said to be “the great Canadian photograph,” of the driving of the CPR’s last spike at Craigellachie, B.C, in November 1885. The photographer, whom I should have credited, was Alexander J. Ross of Winnipeg and Calgary, who actually took several photos of events surrounding the completion of the railroad.

Thanks also for the link to your lively blog.
Chris