The Fast Set in Edwardian times

Victorian History, one of my favourite blogs, was writing about the social life of the upper classes in Victorian times which revolved around The Season. While the upper classes often had an activity-packed social life in the country, it was in the three months that they generally spent in London that the most impressive entertainments were on offer. The dinners, parties, balls, weekend visits to other peoples' homes, presentation of daughters to the royal court and fabulous clothes must have been amazing to watch. And fearfully expensive.

Gentlemen drove an elegant tandem, a type of dog cart which was developed in the Victorian era as a more refined version of a gentleman’s cart. The height of the driver’s seat was elevated to give better control of the lead horse. Tandem carts were much favoured by young bloods, being agile equipages ideal for fast and reckless driving, the sports cars of their day. A Tandem Club met regularly in Hyde Park where smart turnouts and the skills of the whips could be admired by society families.

But were Edwardian times any different, at least for the very well heeled? You will remember a book I loved called The Fast Set: the World of Edwardian Racing. George Plumptre wrote about society families meeting in Hyde Park London, a subject I had been very interested in just a few months ago. On a topic that had been quite difficult to research, I found the following: 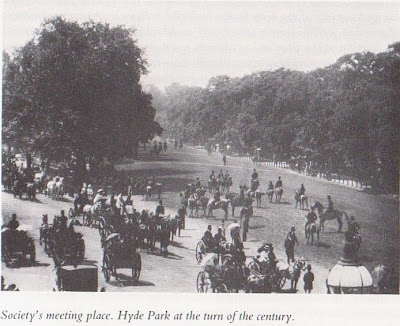 "Before the emergence of the Prince of Wales and his circle, Society's activities had been largely confined to London. Here the pace was stepped up rapidly; the occasional balls and tedious levees and garden parties being replaced by a far more demanding round of entertainment for which opulence, rather than taste, was the watchword.

During the day, teatime was the occasion for private calls, normally because wives could entertain their lovers without fearing that their husbands might barge in at any moment, and the men could visit their mistresses without anyone wondering where they had been. Equally important was the daily parade in Hyde Park's Rotten Row, which by the 1880s had become a formal ritual. Here one walked, drove or rode, and appearance was all important. 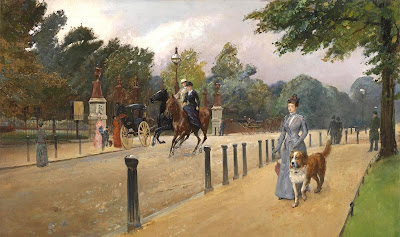 Daisy Warwick, one of the prominent figures in the parade, described the scene in her memoirs. 'Late afternoon in Hyde Park meant state carriages, with beautifully dressed occupants, pulled up under the trees. It was not etiquette to handle the reins oneself in the afternoon, so we sat on rows of chairs chatting and behaving as if the world we knew, bounded by the Smart Set, was a fixed orbit. As if London, our London, was a place of select social enjoyment for the Circle. As if nothing could change in this best of delightful worlds. Then there would be the clatter of faster horses, and down this mile of drive came the well-known royal carriage with the beautiful Alexandra, Princess of Wales, bowing right and left as only she could bow, and hats were raised and knees curtsied before seats were resumed and interrupted chatter continued'".

But nowhere did Plumptre mention church parades or sabbath day respectability! Instead he talked about the fortune that aristocratic owners spent on breeding, training and racing thoroughbred horses. Led by the fun-loving Prince of Wales and later King Edward VII, high society linked their lavish house parties with the main meetings at Ascot, Epsom, Goodwood and Newmarket. It became as important to dress beautifully for Derby Day, and to entertain dozens of one's friends at a lavish luncheon at the race course, as the Victorians had done for a weekend of shooting and partying at Chatsworth. 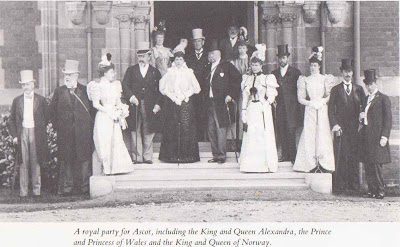 The blog Edwardian Promenade added another key element of the activities that amused the fast set. a passion for gambling that overtook them during the 1880s. Baccarat was the initial game of choice and no hostess threw a country house party without a baccarat game. The Prince of Wales was a particular fan of this illegal card game, and he set the standard! But baccarat was eventually discontinued in society, and just as quickly as that went out, bridge came in. The craze swept women in particular, and in the pre-WW1 years, the conversation of the most obsessed centered around bridge.

This leads me to my favourite Plumptre photo, a group of society women at the races. While they certainly  seemed to be posing in positions that would best show off their gorgeous dresses and the men were of course in very attractive morning suits, perhaps they really loved to bet. They seemed to be showing an intelligent interest in the form guides.

I have the Plumptre book. It's very good, but as its title implies, it focuses very much on the racing set.

In "Edwardian Promenade," the book from which my website gets its title, the author states:

"The Edwardians spent a surprising amount of their time in the open air, especially in places where they could see and be seen, They strolled down Bond Street, they attended 'Church Parade' in the Park, they rode in the Row, and, on Sundays, they went 'on the river'."

When you read the diaries of the time, I think a lot of the things you mention were driven by sheer boredom.

Hi Hels
As usual, your comments are not only spot on, they are good fun. I am projecting a couple more short pieces on the middle classes and the "lower and labouring classes." Heaven alone knows when I will get to them, but hopefully sooner rather than later.

Bruce, I will look forward to it. When I refer the students to blogs, I always cite the Victorian and Edwardian history blogs that make my life a breeze :)


Evangeline, I largely agree. Seeing and being seen seemed to be very important.

Talking of the open air, isn't that a terrific photo of the Church Parade? The parade in Hyde Park's Rotten Row allowed these families a golden opportunity to mix with other appropriate families and to be vaguely in touch with royalty.

I would have been bored witless also, if the only things a woman had to think about were: her daughter's coming-out ensembles, her husband's grouse shooting parties and menus for the next weekend party.

But what made them limit their activities to food, hunting, horse racing, betting, clothes and The Season? Why not invest the same (exhorbitant) amounts of money into patronage of the arts, the universities, their local church or any other institution?

These families chose the socially acceptable activities because they were fun and because they bonded upper class families with other appropriate families.

And, if you believe the evidence, because they could get plenty of action at night, at the weekends away in country estates!

But what made them limit their activities to food, hunting, horse racing, betting, clothes and The Season? Why not invest the same (exorbitant) amounts of money into patronage of the arts, the universities, their local church or any other institution?

Oh, but there were aristocrats who did do those things--they just aren't the primary focus of secondary accounts on the Victorian and Edwardian eras (the Prince of Wales and his mistresses are more fun, right?).

But I theorize that the Season bolstered the aristocracy and the monarchy. First, because the London social season proper was built around the Parliamentary session, and since the very fabric of English society was its politics, how else were women to stay involved in the lives of their menfolk? Second, because there was no Versailles in England--convening in London at a certain period, where the monarchy was in session, was rather similar to the French court pre-Revolution. But, thankfully, the English aristocracy were not forced to stay at the monarch's beck and call at Buckingham Palace or Windsor Castle.

Thanks for the post. I am a fan of this era. I enjoy Edith Wharton and Henry james -- a bit end of this era I think but sounds very like...

my favourite film about the end of the era was and is The Shooting Party (1985) which I warmly recommend. Of course people in 1910,11,12 and 13 couldn't hear the guns being warmed up for World War One. But looking back, those four years were the last of the great years.

A fascinating post. The idea of all that changing-clothes-five-times-a-day leaves me weak with exhaustion (-:

I remember reading somewhere that Edward VI, both as King and Prince of Wales, was extremely cutting to women wearing clothes he thought he'd seen them wear before.

A great post and also a link to a blog I hadn't come across.

I am English and did my degree in Social history and this has given me a lifelong interest and fascination of the period 1830 - 1950.

England has been so socially constrained during the Victorian era that when Edward eventually ascended, it was gloves off. The ostentatious decadence remains unsurpassed.

I have just finsihed a wonderful book entitled "Mrs Keppel and her daughter". Mres K was the long term mistress of Edward.

I am fascinated by the little details - during the London season, a society lady would have up to 7 changes of clothing a day - 5 changes at a minimum. You imagine? All those corsets and bustiers?

There is a wonderful display of costumes in the V & A - and I am astounded at some of the hats which could weigh up to 20 pounds!

Then with the death of Edward we had the dreadfully dour George V, the Great War so the season stopped until 1920 - when a whole new set of values emerged.
Super blog!

Juliana, thanks for that. I must chase up Mrs Keppel during my winter holidays.

I worked as a psychologist for 20 years, then went back to uni to start a second career. I had no marketable skills other than psychology, but I had a passion for history and for art history. So my second career is teaching history and art history in a TAFE college in Melbourne.

I was, and still am besotted with the 17th century in Britain, Spain, Netherlands etc. But students and bloggers want more modern material.

So it is a great surprise to me that I am really loving the Victorian, Edwardian and Inter-war periods. Everything is accessible and fascinating - universal suffrage, international exhibitions, the pre-Raphaelite Brotherhood, the Vienna Secession, bandstands, pleasure piers, cruising etc... I love it all.

Feel free to post older stuff, too, I'd most certainly enjoy it, and I'm sure I'm not alone!

I wish I knew when it was painted. Staples was a Kensington resident in the 1880s and and 1890s, so I am guessing sometime then.