In earlier posts, I suggested that one could see the antecedents of Sydney’s Queen Victoria Building in Sydney 1898 in London’s Burlington arcade. Now I would like to examine Melbourne’s Royal Arcade 1870 and Sydney’s Strand Arcade 1892, similar in purpose and style to the other arcades that I loved so much.
* 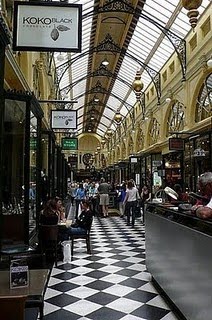 Royal Arcade
Royal Arcade in Bourke St Melbourne was built in 1870. This was long before the bottom fell out of the property market, and so money was still plentiful. Charles Webb was a good choice of architect, for the classical Renaissance-style building. He had a very successful practice during the mid-Victorian decades and many of Melbourne’s most famous buildings had his special touch: Wesley College in 1864, the (old) Alfred Hospital 1869, South Melbourne Town Hall and Melbourne Orphan Asylum in 1878, and the Grand Hotel/now Windsor in 1884.

The arcade is not as long as some of the arcades in London, Paris, Milan and Sydney, but in some ways it is more beautiful. In 1892 the figures of Gog and Magog were installed at the southern end of the main walkway. Carved by Mortimer Godfrey, they were modelled on statues in London’s Guildhall which were built in 1708 to replace those lost in the Great Fire a generation earlier. They probably represented survivors of a race of giants destroyed by Brutus the Trojan, the mythical founder of London. Soon after Gog and Magog were introduced to Melbourne, Gaunt’s clock was installed in between. 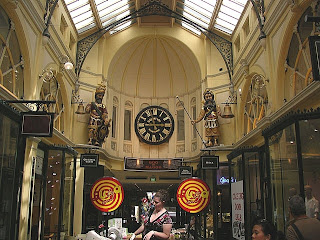 Gog, Magog and Gaunt's Clock
Despite many changes over the time since 1870, Royal Arcade still maintains its airy, graceful elegance. It may not have the range of consumer goods that modern shopping centres have, but it is classy, as you can see in My Sandbox's excited text and Froth and Bubble's delightful photos.

When the Strand Arcade in Pitt St Sydney opened in 1892, it was the last of five glass roofed arcades built in that city in the late Victorian era. Until the crash of the mid 1890s, Sydney architects were expected to create grand buildings that were grand in their own right AND reminded citizens of London’s most grand designs. Naming this arcade after the Strand in London could not have made the link any clearer. Even better, the chosen architect John B Spencer was himself English educated and trained. 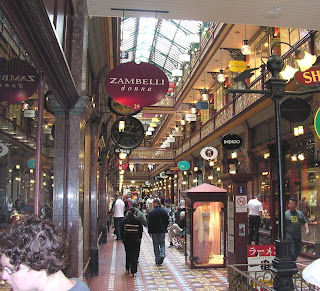 The building was partly destroyed in 1976 in a serious fire. You might have expected the developers to tear down this Victorian gem to build a concrete car park, but it was actually renovated and restored to its original loveliness.


You can see in Sydney – City and Suburbs that the overhanging gallery is supported independently of the columns, to gain an unobstructed view of the full length of the interior. And the fabulous Christmas decorations that make the arcade even more impressive. 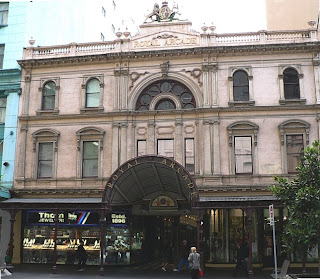 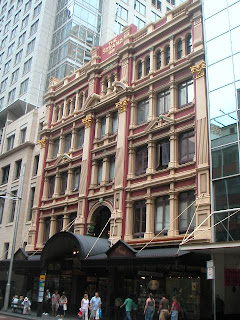 Entrance to Strand Arcade
How big and how wealthy did a city need to be, to build high-end shopping arcades at the end of the Victorian era? The English Buildings blog mentioned that cities like Manchester and Leeds acquired large arcades, but many smaller cities had at least one example to attract the well heeled. He used the beautiful example of Norwich's Royal Arcade 1899. I would add the lovely Adelaide Arcade in that somewhat smaller city.
Posted by Hels at 22.1.10

Great shots. Thanks for sharing these.
Sydney - City and Suburbs

I am struggling through Benjamin's Arcades Project and now this post - synchronicity I guess.

Thanks for adding to my knowledge.

Chris,
I am beginning to think that timing in the blogging world is not just a matter of luck.

I was looking all week for material on an obscure part of Edwardian history, on Lucile Duff-Gordon. Nobody wrote much about her life, except in histories of the Titanic. Would you believe EdwardianPromenade blog posted a complete article called The Designing 'It' Girl this very week.

There must be a higher power :)

Hi how are you?

I was looking through your blog, and I found it interesting, and inspiring to me, so I thought why not leave you a comment. I have a blog also obviously and would like to invite you to become my blog friend...?

I mostly post about my Southern California experience through my art, and a Latino male perspective. Maybe you can become my pal, and follow, and I can also follow you, if that is okay. Well I hope to hear from you soon...

All those images of Shopping malls looks very good.

Melbourne Art Network is conducting a guided tour of a very similar arcade, The Block Arcade. Designed by architect David C. Askew and erected between 1891-3, this complex was based on the Galleria Vittoria in Milan. It is now classified by the National Trust.

I have added a link to the Strand Arcade's amazing Christmas decorations in Sydney - City and Suburbs.

The Block Arcade in central Melbourne is being sold by the private Kearney family through agents Colliers International and Allard Shelton, for an estimated $100 million

I already heard about the Block Arcade but now the rumour is confirmed. The outcome for shoppers and historically-minded tourists will be the big issue.

You mentioned Leeds in passing, but there were no details. The shopping arcades in the Victorian Quarter of Leeds might have been built long after London, Paris and Milan, but they are just as impressive.

excellent... I found the reference. In the 1890s, Leed's municipal government was vigorously promoting a new civic identity for the city, especially after the town was granted city status in 1893. In 1878-1900 eight arcades were built in the city, five of which are still standing. Thornton’s arcade (1878) connected Briggate with Lands Lane and was designed for the owner of the White Swan public house/hotel/theatre. In keeping with its theatrical focus, the arcade’s ornamentation is flamboyant and playful, with pointed arches, lancet windows and cast-iron Gothic roof, the arches pierced with geometric decoration.

Your photos are truly beautiful.
https://ragpickinghistory.co.uk/2011/04/29/the-victorian-arcades-of-leeds/