Britain’s oldest shopping arcade, according to English Buildings, is The Royal Opera Arcade, near Pall Mall in central London . It was designed in 1815.

Almost immediately after The Royal Opera Arcade opened for business, The Burlington Arcade became a covered shopping arcade in London that ran from Piccadilly on one side to the Burlington Gardens on the other. From the first moment, the arcade was built "for the sale of jewellery and fancy articles of fashionable demand, for the grat­if­ication of the public". And for Lord Burlington! But not for your Great Unwashed English Public. 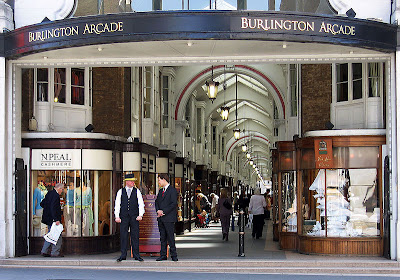 
The arcade was built for Lord George Cavendish, younger brother of 5th Duke of Devonshire. He had inherited the adjacent Burlington House, on what had been the side garden of the house, and was trying to prevent Londoners from spoiling his lovely home. His architect was Samuel Ware. Opened in 1819, the Arcade consisted of a single straight top-lit walkway lined with 72 small two storey units. Some of the units have now been combined, reducing the number of shops somewhat. You can best see the interiors in Tired of London, Tired of Life.

By the way, Burlington House was a Palladian home, built at the very end of the 17th century. Since the Burlingtons owned it, the main building has housed the Royal Academy of Arts, while five scholarly organisations occupy the two wings of the courtyard and the southern Piccadilly wing.

Anyhow, the pedestrian arcade has always been an upmarket retail location. It is patrolled by Burlington Arcade beadles in over-the-top uniforms. The original beadles were all former members of Lord George Cavendish's regiment, the 10th Hussars. But were they to keep dirty, squalid Londoners from coming in off the street, spoiling the pleasure of the well-heeled shoppers? 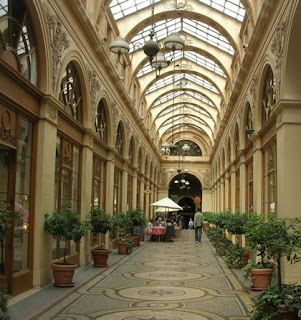 
The arcade has well-designed shop fronts on both sides, under a glazed roof. Respectable, staid and quietly moneyed, so there are no discount shops here. Rather the shops specialise in good clothing and accessories, elegant art rooms, jewellers and dealers in antique silver. London blog in Window Shopping at Burlington Arcade stressed the arcade’s opulence. Sleevehead blog concentrated on Winter looks: Between Savile Row and Burlington Arcade – smart men’s wear. 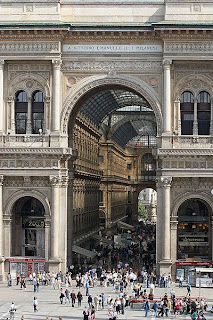 
It is said that Burlington Arcade was one of the precursors of the gorgeous mid-C19th glassy shopping galleries that emerged across Europe and to the New World. apartmentsramblas blog said Galerie Vivienne in Paris is special. The floor is covered in mosaic, the staircase is made of wrought iron and the stain-glass windows are original. Beautiful ornaments complete the design of the gallery which opened in 1826 and remained the Parisians’ favourite place to go shopping until the Second Empire. Spice of Life blog compared Galerie Vivienne to a stage set for a romantic opera! 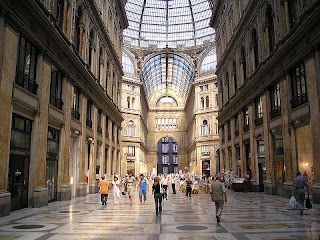 Consider in particular Galleria Vittorio Emanuele II in Milan 1865-77 or the somewhat later Galleria Umberto I in Naples 1887–91. And it is not too far-fetched to see the antecedents of Melbourne’s Royal Arcade 1870 and Sydney's Queen Victoria Building 1898 in Burlington as well, as we will see in two later posts.

I have barely considered the façade of Burlington Arcade, or indeed of any other of the shopping arcades that followed Burlington. That is because a façade was easily changed. The Burlington Arcade façade was added in the early 20th century, too bulky for the original, more delicate decoration inside. 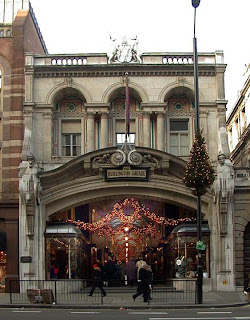 For a photo of Burlington Arcade beautifully dressed for Christnas 2009, see WIDN. But do it quickly. The American and European owners of Burlington Arcade apparently want to transform the Regency space into a more brightly lit, stainless steal affair, populated with brand names. The Georgian Group is sustaining objections to what they call brash development. As of December 2011, Westminster City Council was still turning down plans to alter Burlington Arcade in Piccadilly.

Burlington Arcade is indeed a special place. One of the things you're not meant to do in there is whistle – among the arcade's target clientele, whistling is considered to be a rather lower-class activity - and I've always been tempted to try whistling in there to see if a beadle throws me out.

I also like London's Royal Opera Arcade, designed by John Nash and opened just before the Burlington. It ran alongside the old Royal Opera Theatre in the Haymarket, and the arcade survived when the theatre burned down. It's smaller than the Burlington Arcade, and the walkway is lit by a series of little glass domes.

Philip,
many thanks for that. I know Nash's work in other sites, but not the Royal Opera Arcade completed in 1818.

Although this was only one year or so before Burlington Arcade was completed, it suggested that Burlington and Ware had seen the Royal Opera Arcade (or at least the plans) before starting their own plans.

Is it possible that Nash and Ware were both referring back to yet another precedent, one that perhaps didn't survive the last 200 years?

Great photos. I want to visit all of them.
Sydney - City and Suburbs

An interesting article. I think it is also interesting the number of small towns, at least in the UK and probably worldwide, that had their own small covered Victorian arcades. I remember there was a fairly small but grand one in the town I grew up in. It did give the impression that it had standards, but it had definitely faded a little by the time i got to know it, and it has long ago been demolished now.

The Royal Opera Arcade seems to have been the first British arcade, but there were several in Paris, starting in the 1790s, so the inspiration may have come from there. I should have attributed the Royal Opera Arcade to Nash and G S Repton (son of Humphry and Nash's pupil and assistant).

Joe and I visited Royal Arcade in Melbourne last weekend for the first time for years. As we walked along the shops, both of us remarked how much it felt like Burlington Arcade in London and Queen Victoria Centre in Sydney.

they were presumably pulled down because people shop in huge, ugly, soulless malls these days. What a shame.

I was thinking a lot about Humphry Repton in January:
http://melbourneblogger.blogspot.com.au/2012/02/little-red-book-of-garden-design.html

How amazing that you cited G S Repton, son of Humphry and Nash's pupil and assistant. I did't know about the son but I will chase him up asap. Many thanks.

For the most amazing photos of Galerie Vitorio II in Milan, go to Emm in London
http://www.emminlondon.com/2013/09/galleria-vittorio-emanuele-ii.html

See the Victorian market halls of Horace Jones. The final market that he built, Leadenhall (1881), is perhaps the most architecturally accomplished. Forced into a crooked medieval crossing that could not be cleared away, it consists of iron and glass roofs over a rather frothy Ionic order. More of an arcade than a purpose-built facility, its polychromatic Englishness is a satisfying example of late Victorian decorative intensity.

I am fascinated with Leadenhall and will definitely dedicate a future blog post to the market halls of Horace Jones. Many thanks for the history and the photos.