Queenscliff, on Victoria's south coast, grew up in a hurry. 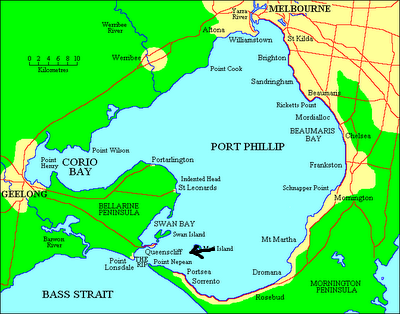 In 1852 Victoria’s Lieutenant Governor Charles La Trobe commissioned a surveyor to lay out a town at the opening of Port Phillip Bay. This settlement was named in 1853 and soon the first town lots were sold. By 1854, facilities for the Health Officer at the Quarantine Station were built, a Customs Officer was appointed and the old lighthouse was incorporated into the new town. The first hotel was built. The telegraph office was built by Jan 1855. Smart homes, churches, hotels, parks and a jetty quickly appeared. Small steamers offered trips around the Bay.

In 1857 the Anglican Bishop had licensed a timber building at Queenscliff to be used for public worship and as a school. In 1863 the present lovely limestone Church of St George the Martyr was built in the gothic taste by a Melbourne architect. It was completed in 1878 with the addition of the stuccoed brick tower. 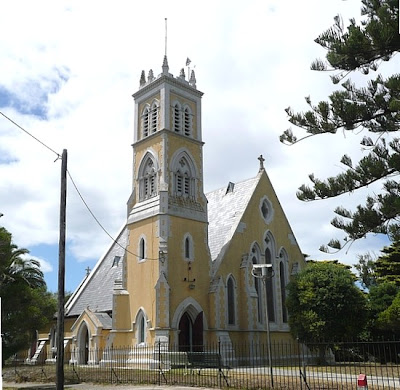 Church of St George the Martyr 1863

As the city of Melbourne (104 ks from Queenscliff) became wealthier, fears of invasion increased, particularly by the Russians who had just been defeated in Crimea 1853-6. [If you think this fear of Russia was fanciful, Port Focus blog described how a boat was bought to defend the colony of Victoria from the very same threat of Russian invasion].

Anyhow, as a direct result of this fear, a detachment of Victoria’s Volunteer Artillery formed in Queenscliff in 1859. A gun battery began at Shortland's Bluff and this in turn led to the building of two new lighthouses. Queenscliff's famous Black Lighthouse, built in 1862, is the only lighthouse in the southern hemisphere that is made from unpainted, dark bluestone. It is also called the High Lighthouse since it was built in a spot that was later used for Fort Queenscliff, guarding the entrance to Port Phillip Bay (see map).

Following the 1875 Royal Commission into the Volunteer Forces, the Victorian Government invited the Director of Works and Fortifications in London, Lieutenant General Sir William Jervois, to travel to Melbourne to advise on our defences. He and Colonel Scratchley recommended that the basic defences for the Colony should be concentrated on the Heads of the Bay, and should consist of fortifications at the entrance to the Bay (called The Rip on the map).

A tough Fort Queenscliff was commissioned in 1877. Walls were erected against a ground-based attack, massive guns were installed and dry moats were dug around the perimeter of the fort. Then a military railway line from Geelong opened in 1879, allowing better access to the Bellarine Peninsula area and its growing network of forts. The fort soon acquired a drill hall (1882), barracks (1885), a guard house (1883) and a separate cell block (1887). These buildings were all built from timber and corrugated iron, and were not intended to be gorgeous, but many survived. 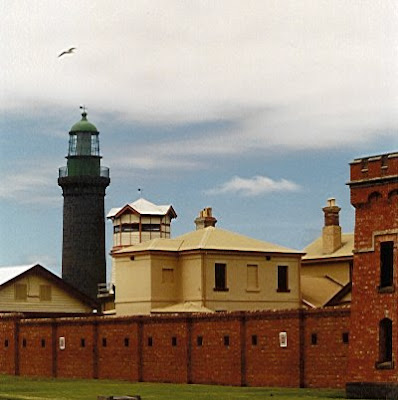 Civilian presence in the Fort ended in 1887 when the lighthouse keepers' quarters and the post & telegraph office were turned over to military use. [The guns at the fortress network were only fired in anger once. The first Allied shots of WWI were shot when a gun at Fort Nepean fired across the bow of a German freighter, as she fled out to sea].

Once the railway line from Melbourne reached this beach town in 1879, many splendid places went up within a very short decade, starting with the Royal Hotel 1854, Queenscliff’s oldest hotel, then Esplanade/Palace Hotel built in 1879, the Vue Grand Hotel 1883 and the Lathamstowe Hotel 1883. In the 1880s, even larger buildings were erected in the town by rich Melbournians on holiday. Coffee palaces and temperance hotels survived well in country resorts where, even after the interest in temperance had faded, families still needed good quality, clean places to stay. Some of the truly beautiful hotels in Queenscliff had started life as coffee palaces and temperance hotels eg the Baillieu Hotel 1881, later renamed Ozone Hotel. 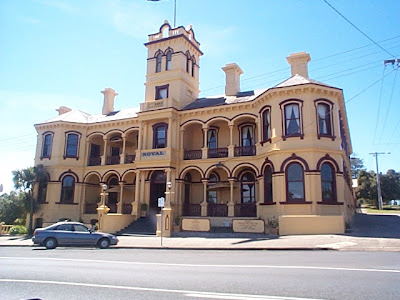 A new pier was built in 1885 and this encouraged the building of a larger paddle steamer. This in turn led to beautiful terrace houses being built, as Australian Terrace Houses blog explained (see Thanet Terrace, written 7th Nov 2009).

Continuing prosperity in the late 1880s and early 1890s led to the building of more guest houses. The Queenscliff Hotel 1887 clearly recognised that wealthy Victorian Society regarded Queenscliff as a fashionable summer holiday resort. The owners commissioned their Melbourne architects Reed, Henderson and Smart to design a hotel in the style of an elegant home, rather than a public building. In this way, they would hopefully attract the cream of their potential client-pool. Two more tourist paddle steamers opened up for business. 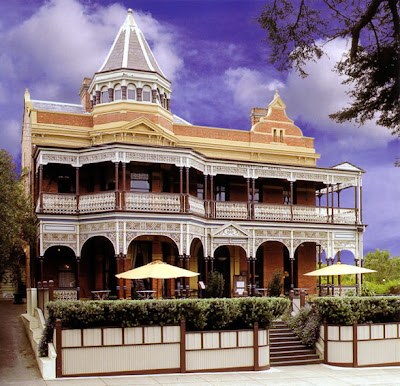 The architecture is gold boom brash mixed with old money grandeur; and in the 1880s there was no shortage of money. The buildings are vast, including the old post office (1889) which is a huge lump of late Victorian architecture. They look too big for the size of the town but the gentle rising and falling away of its topography from sea to wetlands gives the place a terraced effect. The guest houses sprawl and the hotel balconies soar. Gemma Wiseman’s Greyscale Territory blog has wonderful photos of Queenscliff’s 19th century treasures. 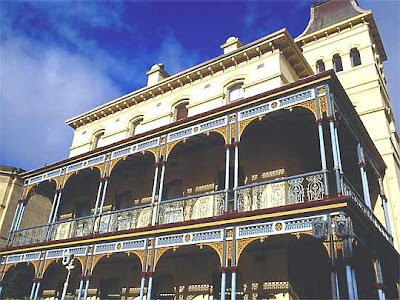 Stunning architecture. It really is beautiful. I understand your heritage concerns with the Grace Bros department stor ebuildings being used for student accommodation. I noticed this weekend that they were sprucing up the exterior again with a new coat of paint. So at least the tenants in both buildings allow them to keep up the restoration work.

Thank you so much for the kudos! Greatly appreciated! I will have to post more photos!

What a lovely place. I can just picture the families taking tea on the terrace.

What a lovely post! I absolutely loved Melbourne when I was there but now your post makes me want to go back and appreciate in more detail the architecture there.

I just saw the picture of the Church of St George the Martyr and it brought me very good moments in my mind since I got married there for first time!

Thank you, everyone. Queenscliff is one of my favourite coastal towns.

I hadn't included a photo of the old post office myself, so now you will find a link to The High Riser blog.
http://highriser.blogspot.com/2012/01/so-it-is-2012.html

I am in love with this architecture!