There has been a small Jewish community in Birmingham since at least the late C18th - by 1791 there was already a prayer-room set aside in a private house near today's New Street Station. Next there was a small purpose-built synagogue built in Hurst St, but today nothing remains of it.

The community grew during the C19th and by 1851 the population was over 700. The modestly-located Severn St Synagogue was built in the Greek Revival style in 1827; it now serves as a Masonic Tem­ple. By 1900 the population reached 3,200 and a Jewish area developed around Hurst St and Holloway Head where many historic Jewish buildings can still be seen. 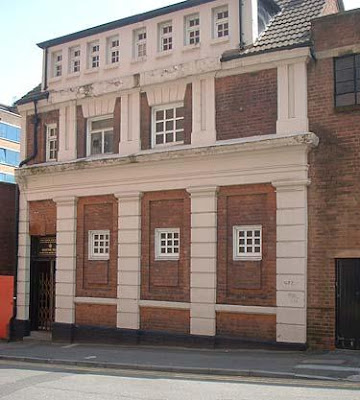 The original and rather "hidden" Severn St Synagogue

In Britain, according to Sharman Kaddish, life was reasonable for Jews. But land acquired for synagogues or for burial of their dead tended to be leasehold. As foreigners, they could not own freehold land. Synagogues, like non-conformist chapels and Catholic churches, tended to be found off the public thoroughfare, tucked up alleyways. This included the very elegant Bevis Marks Synagogue which was built in London between 1699-1701! Synagogues of the Georgian and Regency periods largely followed this model of modesty. Surviving examples include Exeter (1763-4), Ramsgate (1831-3) and Cheltenham (1837-9), all Grade II Listed buildings.

The cathedral or choral synagogue tended to emerge in the emancipation era of the C19th, when Jews in Europe burst out of the ghetto and moved up the social scale. The development of the cathedral synagogue was thus rooted in a particular historical era. In France, after the Revolution of 1789 and more irregularly in Germany during the C19th, the acquisition of civil and political rights led to the emergence of the Jewish community into the modern world.

Britain was at the forefront of the Industrial Revolution and, by the mid-Victorian period, Jewish entrepreneurs were contributing to the development of Britain's growing industrial cities: London, Birmingham, Manchester, Liverpool and Glasgow. Successful Jewish communities made themselves visible. 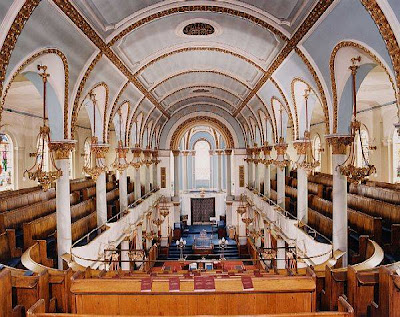 Singers Hill Synagogue, out and proud

Their newly acquired confidence found expression in the construction of large-scale synagogues on public streets. These were prestige buildings, conceived in the grand manner, as symbols of the Jewish presence in the city. In 1856, the Birmingham congregation sold Severn St Synagogue, and moved up the hill to the lovely surroundings of Singers Hill Synagogue. The timing was perfect - this Birmingham Synagogue was one of the first cathedral synagogues to be erected in Britain.

The architect was Henry Yeoville Thomason (1826-1901) who was a fan of Italian Renaissance architecture. Externally the architecture featured a portico with a rose window to the entrance gable, flanked by to projecting wings to form the entrance courtyard. Note the confident red and yellow brick surface.

The interior combined the Romanesque and Neoclassical styles with Italianate detailing, based on the classic Basilica plan. The mahogany central reading desk and mahogany ark were clearly visible to all the congregants since natural light streamed in over the clerestory. The original cast and gilded gas chandeliers were a delight, hanging between the beautifully gilded capitals of the classical columns. The excellent stained glass, however, was newer (c1922). 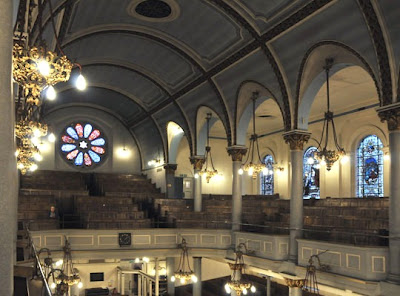 In this photo of the women’s gallery, the modern viewer can appreciate the rose window, the stained glass windows along both sides and the gas chandeliers.

Shortly after it was finished in 1856, the synagogue was described in the local press as ‘a glory to the community and an ornament to the town’. A letter written at the time of the opening of the synagogue described the splendid consecration ceremony.

The synagogue itself had seating for 1000. But other facilities were needed since the Jewish population was rising. Schoolrooms were built at the rear of the site in Ellis St for the 350 pupils of the Birmingham Hebrew Schools which operated from 1856 until the 1930s. The school building is now the communal hall. Two houses for the resident ministers were included in the complex, the whole forming three sides of a quadrangle around a courtyard.

In the 1990s, an English Heritage grant helped fund repairs to the major architectural structure and the congregation's own fundraising efforts paid for the smaller repairs to stonework and windows.

Singers Hill Synagogue has recently been awarded the title of 'most improved Place of Worship in the West Midlands' by English Heritage. An English Heritage report, looking at the condition of religious buildings, had found that 200 West Midlands places of worship needed urgent and major repairs. The report highlighted Singers Hill Synagogue as a place that was previously vulnerable but now restored, and definitely not at risk any longer. Nonetheless an architect  has now been made responsible for improvements to the building's structure. 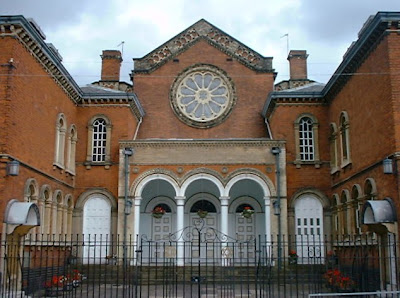 Singers Hill Synagogue has played an important part of the life of Birmingham Jewry over the last 150 years. Even when movements of Jewish population within Birmingham resulted in new synagogues and homes for the elderly elsewhere in town, Singers Hill remained an important hub. The community didn't peak until the inter-war years (at 10,000) but then in the post-war era, numbers declined to 3,000. Many locals moved to Bitish cities with larger Jewish communities or emigrated to Israel or Australia.

An excellent read is The 'Cathedral Synagogues' of England by Sharman Kadish, published in Jewish Historical Studies, volume 39, 2004. For an analysis of England's 10 most beautiful synagogues, complete with photos, see Heritage Calling.

Spot on. My parents emigrated to Australia in the 50s, when I was too young to have an opinion. So I don't remember Singers Hill much myself. But I do remember being bored at Hebrew School

More knowledge - unfortunately I don't know Birmingham. There is a nice video tour of the synagogue in Bristol :

Hello Helen:
It is to our shame that although we would profess to know Birmingham quite well, we have never seen or indeed known of this Synagogue until your wonderfully informative post.

It looks to have been restored beautifully with careful attention to detail. How marvellous to know that it is no longer considered to be a building at risk.

I hear you, mate! I used to be sent off to Sunday School every week throughout the 50s, probably because my parents wanted the house to themselves for a few hours every Sunday morning :)

Thank you for reminding me. Bristol synagogue is lovely, isn't it. I particularly enjoyed the ark, eternal light and windows.

It is maller of course than Birmingham's, but the mid Victorian Jewish population of Bristol must have been rather tiny. By the time the Bristol building was completed, in 1871, the total seating capacity was only 240.

As we have all sadly seen, once-beautiful buildings will fall into disrepair, if they aren't maintained and improved.

I assume English Heritage recognises that it has to pay for the major rebuilding costs of these important historical sites. Individual communities can raise their own monies for the lesser tasks.

I mut have too much time Helen but there is a short rather shaky video of what I assume is your synagogue on youtube. Just search birmingham synagogue.

I had a look, many thanks. Shaky would be fine, but dark defeats the entire purpose of being out and proud, architecturally speaking. Cathedral synagogues didn't have to be humble. They could soar and the gilded gas chandeliers could shine in the natural light.

By the way, I lived in the UK for years and have visited many times since, yet I have visited Birmingham rarely and have studied its architectural history never *blush*. But ask me about Norwich, Chester, Edinburgh, Cambridge, Bristol, Salisbury, Dublin etc and I know all the important buildings. Is this snobbery about cities that grew up as manufacturing centres like Birmingham, Manchester and Leeds?

Thanks for this informative post. Incredible as it may seem (because I have visited Birmingham at least twice a year during the past seven or eight years) I knew nothing of the Jewish heritage and to my shame never heard of Singer's Synagogue. Thanks for rectifying my ignorance. I will certainly visit it during my next visit.

I came across the concept of a cathedral or choral synagogue before, when writing about St Petersburg Choral Synagogue. Birmingham had a tiny community in comparison, but still managed to build proudly.

Wow! Quite amazing. They so look a lot like churches, don't they?

cathedral synagogues, as used here, just means prestige buildings, conceived in the grand manner and in a public space.

But is interesting that Birmingham does indeed look like a church. In the 19th century many European synagogues were designed to resemble mosques or New England's colonial meeting houses, rarely churches. They wanted to avoid the church-like appearance, I would imagine.

By the mid Victorian era, the Jewish communities of the big UK cities were confident enough to develop a church shaped building for their own community's needs. And to make it beautiful.