Jewish Pale of Settlement in Russia

Czar Catherine II established the Pale of Settlement in 1791 as a territory in which Russian Jews were obliged to live. Presumably she had been convinced to design this system to rid Moscow of Jewish businesses and to concentrate the Jews in a relatively narrow and well-defined space.

And because Russia annexed a large area of Poland soon after Catherine the Great’s announcement, Russia now included areas that had a VERY high concentration of Jewish families. According to Alden Oreck, the Pale of Settlement made up only a small proportion of European Russia. The map of the Pale below looks large, so I assume Oreck meant that the designated area was gradually reduced by the edicts of successive czars. Yet it clearly included territory inside modern Poland, Latvia, Lithuania, Ukraine and Belorussia. 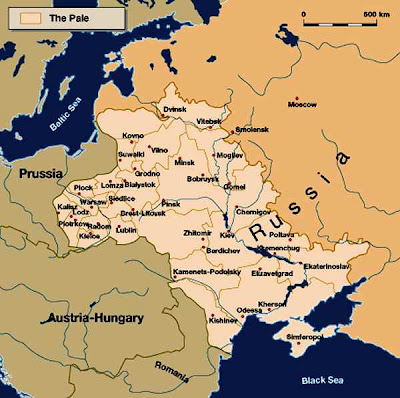 A liberalisation period in the 1860s, which granted Jews some of the rights of ordinary citizens, was reversed under the May Laws of 1882. As the Museum of Family History blog has shown, these laws of Czar Alexander III pushed Jews back into the Pale, to towns that were often overcrowded and offered limited economic opportunities. And even within the Pale, Jews were limited: for example they were not allowed to lease land or own farming land.

Jewish (and other minority) boys were conscripted into the army at the age of 12 and placed for their military education in Cantonist Schools. Then they were required to serve in the Russian army for 25 years after the completion of their studies. I had imagined that the plan was to denude the Pale of potential fathers for a new generation of Jewish families, but The Russian History Blog reported it as a Christianisation and Russification programme. He is correct. The goal was to convert the boys, by whatever method it took. 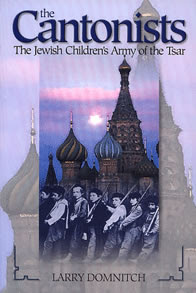 Also thousands of Jews were terrorised by devastating pogroms in the 1870s, 1880s and into the new century. Ironically it was these very pogroms inside the Pale that led to mass immigration of Russian Jews to establish vibrant communities in America, Britain, Palestine and South Africa.

Did the Pale of Settlement work? If the goal was to control the Jewish communities and keep their numbers down, clearly not. The Jewish population in Russia grew from 1.6 million in 1820 to 5.6 million in by the time World War One broke out. If the goal of the Pale was to keep Jews out of certain important cities, it worked well. The largest Jewish communities were Warsaw, Odessa, Lodz, Vilna, Kishinev, Minsk, Bialystok, Berdichev, Vitebsk and Kiev – NOT the capitals of Moscow, St Petersburg and Kiev. As Max Grossman noted, the Jews were successfully kept out of these cities, as well as Nikolaev, Sebastopol, Yalta, Rostov, Riga and Tallinn.

Even as late as 1911, when the Duma began debating whether to eliminate the Pale or not, extreme nationalists demanded the retention of the system. Only after the overthrow of the Czarist regime by the Bolsheviks in 1917 was the Pale of Settlement finally dismantled.

Two million Jews left Eastern  Europe in the 30 years before WW1 broke out in 1914 - many to the New World but also a huge number to London. One side of my own family came from Berdyansk and Mariupol, via the East End of London, to Melbourne. The other side came from Odessa and Simferopol, via Jaffa in Israel, to Melbourne.

I was very interested in the article. I have found out that my father's family came from Zhitomir. When my grandfather came to Britain circa 1909, my grandmother took the children to stay with her mother in Berdichev till he sent for her. They were all in Britain by the 1911 census and she had my youngest uncle in Britain before the census.

I was going to say we might be neighbours and cousins :) One side of my family is from Simferopol and Odessa and the other side is from Berdianksk and Mariupol (both on the Sea of Azov). But as you can see from the map, Berdichev was to the north west.

Have a great holiday
Hels