Why did complex narrative tales, set in rather ordinary settings, make their mark in the mid Victorian era? What happened to heroic history scenes and ponderous religious themes? The sense of a long standing cultural tradition, somewhat less confidently proposed in British countries than in European countries, came under the influence of middle class values. Middle class families increasingly participated in art patronage, art academies, art journal publication and thoughtful newspaper critiques. Even the Pre-Raphaelite Brotherhood had an interest in revitalising history painting through complex stories and an accurate use of historical details.

I have to assume that the Victorian viewer did indeed understand the elements of the paintings. The paintings were set in contemporary times, in middle-class homes or court rooms or trains. Victorians audiences worked out the deep meaning of the paintings from the characters’ facial expressions and body language. Symbolic details were the biggest aid to decoding the story, although I am not sure if the artist's goal was moralising about peoples’ behaviour or discreetly peeking in on it. Certainly the titles of the pictures helped the viewer.

Many Victorian artists loved the contemporary, the complex and the meaningful. Think of James Collinson (1825-81)'s paintings of broken families after one child emigrated. Or the anxious court room scenes of Abraham Solomon (1824-1862), an artist I have already discussed in this blog.
*
London-born George Smith (1829-1901) was born at the same time as Collinson and Solomon. Smith was well trained, being a pupil of the Royal Academy schools of art and working under the artist C W Cope. Plus he exhibited at the Royal Academy and other important professional exhibition spaces. Smith often painted landscapes and genre scenes that focused on children, but in this post I want to note a series of four of his paintings that hung together thematically: The Will Lost, Searching for the Will; The Will Found; and Reading the Will. 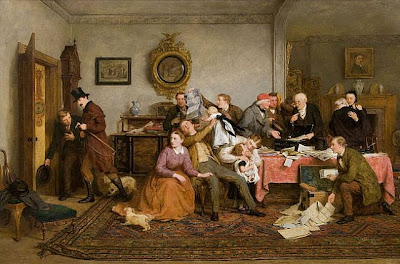 The Will Found was a complex narrative painting. A family had lost the will after their father and grandfather died, and everyone was in a flurry of searching activity. After searching through every document in the home, the will was located. A young man, holding the prize in the air, was giddy with excitement and relief. On the left, a ne’er do well who had been cashing in on the confusion, was escorted out of the room as quickly as possible. Children were being kissed, elderly aunts were weeping with relief. Even the dogs could sense the excitement.

Bearded Roman blog thought it most likely that George Smith produced The Will Found to be a print, from the very beginning. Prints and contracts with printers were often more lucrative for painters than the sale of the original work.
*
We know George Smith was popular. Firstly it is possible that an early patron of George Smith was the Prince Consort Albert. Secondly, when his paintings were exhibited at the Royal Academy in 1851, The Art Journal admired them in its review. Later his work was indeed reproduced as engravings in the Art Journal (1863, 1867). And thirdly at least four of Smith's works are in important national collections: 3 in the Victoria & Albert Museum, and one in Nottingham Museum.

At least two more complex stories painted by George Smith can be found in the super Victorian Paintings blog:  Paying the Legacies, 1872  and The Last Scene in the Gambler's House, 1871.
Posted by Hels at 27.10.09

Very interesting post. To do several complex paintings around one theme must have been quiet a challenge.

I love the Victorian drama in this painting. There's so much excitement in the scene, but yet the scene maintains the proper level of Victorian restraint and decorum. Thanks for posting it; I've never seen it before.

Maybe Smith was intentionally enigmatic with this painting. I will have to look at the rest of the series to see if I form an opinion.

M
I had not seen this painting before either... in fact I had never even heard of George Smith before seeing the painting in a paid advertisement for an auction house.

Since I know Abraham Solomon, WP Frith, James Collinson etc well, I wonder what happened to George Smith's reputation in the part 150 years.

It always fascinates me that some artists maintain their reputation after death but others (think of El Greco) fade into oblivion and have to be resurrected ages later.

Thank you, Hels. I like the fact that the paintings concern a legal document and that they capture so much drama in the family! I agree that it must have been a big effort to do a series of these paintings.

They are new to me as well.

I was delighted to read your view that Waldmüller influenced the later Pre-Raphaelite painters of England who loved his spontaneous painting methods and careful observation of nature.

That leads me to two questions:
a] did he ever travel to Britain, or vice versa? If not where would his influence have come from?
b] which Pre-Raphaelites do you think show particular influence?