I want to contrast Ferdinand Georg Waldmüller (1793-1865) who was the most important Viennese painter of the Biedermeier era. Waldmüller was a little older that the Englishmen, but he too flourished in mid century. His paintings were also detailed and complex narrative tales, set in rather ordinary settings, but Waldmüller was no mere observer and commentator on modern life. He specifically extolled the health-giving qualities of rural life, and the moral virtues of family life.

There was of course a big difference between Victorian Britain and Biedermeier Vienna. The Austrian Empire was ruled by tough, secret intelligence agencies. Lodges, clubs and societies were shut down; members were imprisoned. This effectively forced people from the coffee houses and meeting halls into the privacy of their homes. Private life and social contacts were restricted to a circle of true and reliable friends. Bourgeois geniality and charm were celebrated; poverty, disease and an omnipresent police force were not! 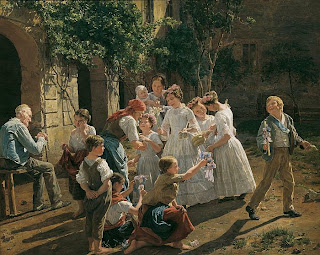 Although many of his paintings were chock full of characters, I have chosen a simple image by Waldmüller’s standards: The Grandmother’s Birthday 1856. The catalogue of the Queen’s Pictures suggested Waldmüller’s success stemmed from his powers of observation, from his measured style and his wholly sympathetic treatment of subject matter. The Grandmother’s Birthday was purchased by Prince Albert and given to Queen Victoria. Presumably Albert saw the royal family as being a model of family unity, and knew his wife would share that ideal. Today this painting, full of tenderness, is in the Royal Collection in Britain.

The Happy Family by Waldmüller (no date or size) told of a happy family enjoying life, even though the three generations did not live in the lap of luxury. Vanilla Joy blog and her correspondents all loved the image and its message of family cohesiveness, suggesting that Waldmuller was indeed a sensitive artist who understood his audience well (and still does). The Visual Art: Work and Inspiration blog saw Am Fronleichnamsmorgen 1857 (65 × 82 cm) and other paintings. She enjoyed Waldmüller’s realist landscapes and scenes of everyday rural life, particularly noting the changing society of Austria during Waldmüller’s painting career. 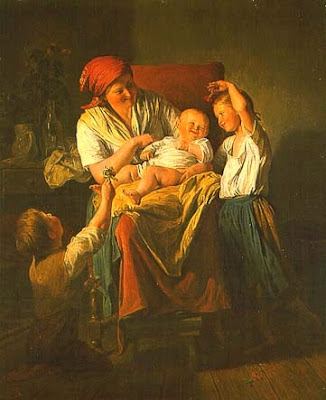 Most of Waldmüller’s landscapes depicted sites in the woods around Vienna eg Early Spring in the Wienerwald 1864, now in the National Gallery Berlin. This spring scene was one that captivated him towards the end of his life, painting it in a number of different versions. Pink cheeked, smiling children were looking with interest at the wonders of nature. His style made light of all possible problems. Here was the true Biedermeier spirit of ease, serenity, apolitical concerns and an interest in nature. 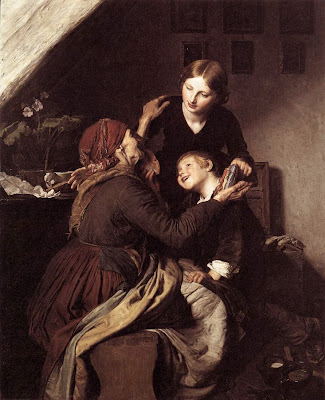 We may find sentimentality in art unacceptable these days, but Waldmüller understood the dire consequences of political comment in Biedermeier Vienna.

Hi! yes, if you'd like to write me a post about Echuca I'd love to have it on my blog!

Oh and also yes, you can ask me to write something. No guarantees I'll be able to though!