Walter Gropius' extensive facilities at the Bauhaus in Dessau beautifully combined teaching, student housing, staff housing, auditorium, offices, eating and social facilities. These sections were all integrated: the school and work shops were connected via a bridge. Another very important architectural commission in Dessau in 1926-7 was an experimental housing project in Torten estate, not far from the School. Gropius was the architect, assisted by Hannes Meyer’s students. Following the principles laid down by The Bauhaus, Gropius ensured that architecture would be international in style, designed to be mass produced, simple and adaptable to all cultures.

Once he had fled Europe before WW2 started, Gropius was involved in a number of buildings in Britain and later in the USA. But there weren’t hundreds of projects in the New World for this very German architect. Let me highlight just three. For his own residence in Lincoln Massachusetts 1937, Gropius designed the home along side Marcel Breuer. Plus he designed the Harvard Graduate Centre in Cambridge Massachusetts in 1950, a group of eight buildings arranged round small and large courtyards on the Oxbridge pattern. And he was the leading architect working on The Michael Reese Hospital and Friend Convalescent Home which were designed from 1954, and completed by 1957.

Why is the Michael Reese Hospital important? Firstly because it was very well designed by one of Germany’s most significant educators and designers. Secondly symbolism is important too. Gropius was the bridge between the modernist Bauhaus style and USA’s International style. 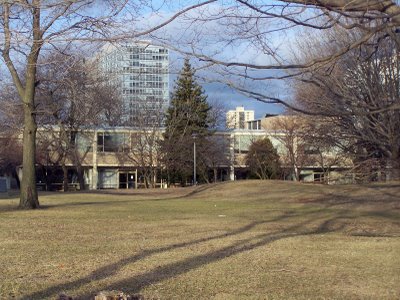 Thirdly the hospital became the first private institution in Chicago to actively advocate for, and succeed in an urban renewal programme. Gropius was committed to a complete neighbourhood planning project that would include shops, housing and educational facilities for existing residents and for the staff who would live in or near the hospital.

Read this article and weep. It suggests a level of municipal vandalism and desecration of historical heritage that takes one’s breath away.

Chicago lets its savage side show: First Gropius building being demolished at Michael Reese; more still to be destroyed

In an act sure to live in infamy, city-hired contractors are tearing down the first of the buildings co-designed by Walter Gropius at the former Michael Reese Hospital campus that are targeted for demoltion. It's the Friend Convalescent Hospital, a once-sparkling modernist gem that was said to be more like a hotel than a hospital when it opened in the 1950s. Grahm Balkany, head of the Gropius in Chicago Coalition, gave the news. He says that it's the first time in decades, according to his research, that a permanent Gropius building has been destroyed.

As if to underscore the stupidity of the city's self-inflicted wounds, a well-informed source dropped by Tribune Tower yesterday to pass along a September 1946 issue of the late, great Architectural Forum magazine, which featured a big spread on the Michael Reese campus. The story's headline reads: "A hospital plans: Seven square miles of Chicago slums are scheduled for redevelopment under a unique planning program sponsored by Michael Reese Hospital."

The spread shows the "shanty housing," "derelict mansions" and "gutted sites" that made up the "slum community" around Reese. And it offers renderings and plans that show the bright new modernist world to come (complete with skip-stop elevators, those that would stop at every other floor) in the apartment buildings planned around Reese. Gropius is clearly and prominently credited as the "architectural consultant." In the following pages is another spread, headlined "Illinois Tech replans 16 city blocks," discussing how IIT and another German emigre associated with the Bauhaus, Mies van der Rohe, were reshaping a nearby swath of land on the South Side. 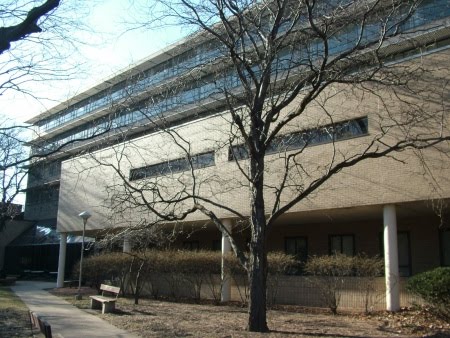 What all this suggests is that Chicago is plundering its history, much as the city did when it allowed the destruction of Louis Sullivan and Dankmar Adler buildings in the 1960s and 1970s. Tim Samuelson, the city's cultural historian, at least was able to get into three of the still-standing Reese buildings and get copies of the hospital's architectural drawings. The drawings and photographs will allow these buildings to live on in the archives, but they should have lived on in real life. Of the 8 Gropius-related buildings at Reese, only the Singer Pavilion--a psychiatric and psychosomatic institute--may be saved. That's appropriate, in a bizarre way: What Chicago's doing is crazy.

I love these buildings and see that they are the begining of the sort of styles I have come to love in more recent buildings. What a shame to destroy rather than restore them. I've been given to understand how progressive Chicago is. Now I have my doubts.

I had no idea that this was happening! How tragic. This story reminds me a little of the Yamasaki complex that was torn down in St. Louis in the 1970s: http://badarthistory.blogspot.com/2009/09/minoru-yamasaki.html

I agree with marc aurel, it is a shame that Chicago prefers to destroy the buildings rather than restore them.

marc and M,
possibly every city in the world has senselessly destroyed some of its architectural and historical treasures.

Cloudland was built in Brisbane in 1939-40 and was the venue for every concert and dance programme in that city from 1940 until 1982. Developers moved in at 3 am in November 1982 and illegally demolished this amazing building, full of chandeliers, tiered seating around the dance floor, domed sky lights and rich decorative details. The citizens of Brisbane were devastated, especially the ex-servicement and their sweethearts who had once enjoyed R & R from the worst fighting in WW2.

But there was something even more tragic about Gropius' treasures, I think. Something of historical importance to Chicago of course, but also to the rest of the world.