A Night At The Czech Opera: guest blog

I saw my first opera when I was ten, and ever since then, the opera has always been magical for me, regardless of which side of the hall I'm facing. There's a shiver that runs down my spine as I enter a hall, and the wonderful smells of slowly-decaying fabric and paper, faint ancient food and body odours, sometimes the smell of too-hot electrical wiring, burning dust, makeup, hairspray, and all the other elements that make up the smell of an opera house gently tug at my memories.

I moved to Czechoslovakia at age 35, able to say only “beer” and “please”, knowing how to count, and a few musical terms. As a young musician, I was thrilled; as a history buff, I was too excited to blink, afraid I might miss some monument or statue; as an art buff, I was ecstatic. There was always a romance for me about Central Europe: the castles, the politics, the historical legends, the noble famil­ies, the traditions, the grand villas, even the trebuchet projectiles from the 30 Years' War still stuck in the city fortifications. Czechs have always been famous for their architecture; from the Romanesque fortifications, to the Gothic and Baroque churches, to the plague columns, to the avant-garde exhibition centre in Brno, there's no architecture like Czech architecture. Therefore the Czechs, in their enthusiasm for all things architectural, have endowed Prague with not one opera house, but three.

And so you can imagine I was overwhelmed when I got the chance to travel to Prague to attend a performance of Don Giovanni in the Estates Opera theatre where Mozart first conducted its premiere. The Stavovské divadlo had the cornerstone laid on 7th June 1781, opened in 1783, and was financed by František Antonín Count Nostic–Rieneck (1725-1794) and elaborated by the Prague Court builder Antonín Hafenecker; the motto inscribed at the top reads Patriae et Musis/Country and the Muses. This was the Enlightenment, when theatre buildings were thought to be “moral institutions demonstrating the cultural standard of a nation.” (Estates theatre website) The statue in front of the theatre is called “Commendatore” after the character in Don Giovanni. It's called the “Estates Theatre” because it was financed by a noble, and, in 1797 the boxes were bought up in perp­etuity by the noble families, one of the three original “estates”: clergy, nobility, peasantry. A long train ride from Brno notwith­standing, I was eager to get to the right neighbourhood, in the Stare Mesto, about halfway between the main train station and the river, and let the opera and the theatre work their magic. The Stavovské divadlo stands in the former fruit market, Ovocný trh.

A feeling I very often get when standing in historical places is that I am connected now in time and space to the past, as if the boundaries of time were thin, and the Stavovské divadlo was no different. As soon as I arrived, I was enchanted.

The exterior is a golden cream colour with pale green and gilt accents, built in Palladian style. The pediment is straight out of ancient Greece and the keystone archways which provide shelter from the elements as you wait in line echo the curves of the front of the building, the fan windows, and even the ornate wrought-iron balconies that garland the sides of the theatre.

This theatre is one of the very few in Europe that remains largely unchanged from its original state, and when I walked in, there in all its neoclassical glory was everything the romantic in me had hoped for—the original velvet seats in wooden frames, boxes with gilt plaster trim, statues and chandeliers. Of course the candel­abra had been exchanged for electric lighting, and there were wheel-chair ramps and facilities for the hard-of-hearing, but otherwise I felt as if I had stepped straight into the late C18th.

Examine the interior of the Stavovské divadlo. If the interior looks familiar to you, the Czech film director Miloš Forman used this theatre as part of the setting for the Oscar-winning Amadeus. The rectangular interior with two box rows, a gallery and floor seating, can accomodate about a thousand audience members. The ceiling is heavily adorned in neoclassical style, and lavishly décor­ated with gilt plaster. Contrary to the commonplace red and gold in­teriors which usually adorn opera houses and theatres, this interior breathes C18th elegance with dark teal, turquoise and gilt. Every­thing about this building's interior is the physical embodiment of the elevation of the arts, culture, and the social order; to exper­ience this first-hand is to be transported out of oneself and into a higher plane. 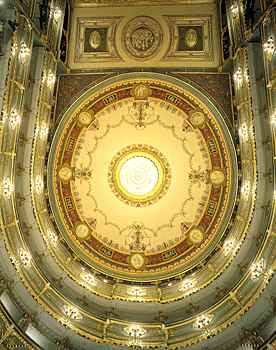 Old opera houses are often tall, with the boxes and galleries ascend­ing three and sometimes four stories. In the old days, the nobility watched the opera from the boxes, the hoi polloi below in the general seating. Operas then were not such formal affairs as they are today, but rather the C18th equivalent of a drive-in. People ate, drank, talked, laughed, watched others to see who was glancing flirtatiously at whom, and in general had a good time. You can still do all that—quietly—in a box. There's a wonderful feeling of privacy in an opera box and while the view may not be the best in the house, it's the totality of the experience that makes opera what it is. Here the boxes both shelter you and put you on display for the hoi polloi to admire. 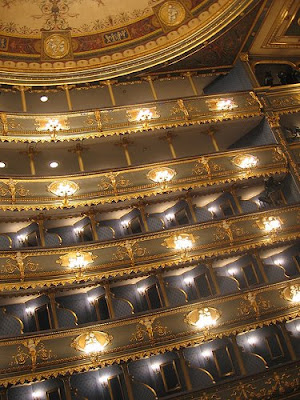 The acoustics, for an C18th hall, are stunning. The sound appears to soar over your head and wrap around you in a surprisingly intimate way. With good opera glasses, you can see the details of the costumes and sets from the box, and even the expressions on the faces of the singers.

The theatre itself has a rich and thrilling artistic history: Carl Maria von Weber, Anton Rubinstein, Karl Goldmark, and Gustav Mahler conducted at the Stavovské divadlo. Native Czech operas and plays were staged here as early as 1785. Niccolò Paganini performed here. And of course, the theatre is intimately connected with Mozart: in addition to the October 29, 1787 premiere of Don Giovanni, in 1791 La Clemenza di Tito was staged in public here for the first time in celebration of the coronation of Emperor Leopold II. Mozart was a friend of the Dusek family, and regularly visited Prague to conduct his operas. The Stavovské divadlo is the only theatre where Mozart performed still standing.

This theatre is also the first place the song Kde domov můj, which was later to become the Czech national anthem, was performed as part of the comic opera Fidlovacka in Dec 1834, and was the home theatre of many of the Czech dramatists and opera composers. The politics of Czech culture is too complex for a single blog post, but suffice it to say that the Czech language and regional culture was subservient to the German and Austrian culture in the C18th and C19th. Having a theatre that routinely supported local artists on Sundays and at matinée performances eventually led to a revolution of culture and a transformational emphasis on regional language, music and culture that spread throughout Europe in the C19th and C20th.

There are many things that contribute to this opera hall's success. The graceful design with its beautiful curves and imposing entrance, neoclassical balance, and Corinthian columns draw the eye up and around. The gorgeous interiors with the original details are a delight to contemplate. But what makes this hall a success, ultimately, is the historical significance of this place for art, for history, and for music. It is the nurturing incubator for all that we have to celebrate about the resurgence of pride in regional culture, both in the Czech Republic and around the world.

What a lovely city Prague is. Is this the main opera house in Prague? There may be the National Theater, the State Opera, and the German Theater, or they may be the one company with different names.

What a beautiful place to see one's first opera, a house truly worthy of Mozart - and of Mahler who, people forget, was born in Bohemia.

I love the fact, too, that the Czech national anthem began life in the opera house, and that its words celebrate not power or glory but the beauty of the country.

Alveo
It's not my first time to pay a visit this website, i am browsing this web page dailly and get nice information from here
all the time.

Typically the Czech Republic seems to have drew quite a few currency special funding (FDI) as 1990, which makes by far the most powerful disruption cities in relation to FDI in every capita. Typically the rewards from funding bonuses through 1998 generated an incredible inflow from currency special funding through Greenfield not to mention brownfield ventures. Typically the Czech Republic’s accession towards the European Union through 2004 extra raised funding.

Thank you. Now my big question is: has it helped save the stunning architecture, either Habsburg or otherwise?