Although I am very interested in later Victorian, Edwardian and post WW1 art, I was not familiar with Scottish artist William Strang (1859–1921) until 2004. That was the year The Edwardians: Secrets and Desires, an amazing exhibition, visited the National Gallery of Australia.

There were several very popular themes in the exhibition, but the social customs assoc­iated with Afternoon Tea were fasc­in­at­ing. This is a theme I have looked at before, in A History of Tea Rooms and the Suffragettes and Emanuel Phillips Fox - an Australian Impressionist. The exhibition essay suggested that the joy of easy outdoors eating was such that many artists were drawn to this subject, from the French Impressionists to E Phillips Fox in Alfresco 1904 and Déjeuner c1910. 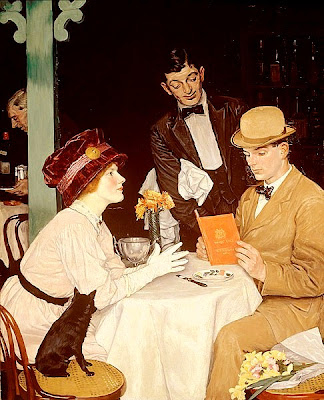 I think indoor eating was less free, more telling.  As can be seen in Blog of an Art Admirer and a History Lover.

Just before WW1, Strang painted group portraits of young moderns wearing fash­ionable outfits, playing out their courting rituals. In Bank Hol­id­ay 1912 (Tate), Strang suggested the young couple were just starting their courting, still uncertain of what to expect. The flowers, unwrapped, lie awkwardly on the chair. Ap­p­arently Strang created a deliberately understated image, leaving it all ambiguous enough so that the individual viewer could weave his own story. My own guess was that the young lady was a little too keen on making eye contact with her partner; the young man was a little too focused on ordering the scones.

It is appropriate that Donald Read’s book, Edwardian England, selected this very painting for the front cover.
Posted by Hels at 22.6.09

I haven't heard of William Strang either. I like the detail in this painting and the clothes!

What did you think of the book, 'Edwardian England', Hels?

Hi Viola. I really like the idea of a collection of essays, written around a specific topic, that brings in experts from different fields. It enables the reader to cherry pick without losing continuity.

This is my problem, not the editors. But the title might have been better chosen.

I have always been intrigued by this painting but I've never been quite sure why.

Perhaps it's simply a case of being interested in what is really going on between the two characters, conversations, relationship etc.

Anyway, thanks for including an interesting painting and artist.

Thank you very much, Hels. I like those topics too. (What else is there? :) I don't think that I'll bother with the book.

Dear Helen,
Browsing the net I came across to your blogger. I bought a William Strang etching representing possibly an Italian church. Do you know if he visited Italy? I don't know a lot about his biography.

I have enclosed a pic of the etching. Many thanks.
Best regards
Fabio


Hey Fabio
good to hear from you.
Although the work in this post was a painting, educated literature buffs know Strang best for his etchings. Books you might examine for his etchings include The Pilgrim's Progress by John Bunyan, Rudyard Kipling's stories and The Ancient Mariner by Samuel Taylor Coleridge.

I will keep looking for any Italian connection.
regards
Helen

Now I need to find out if he is related. We are Scottish Strangs as well so there is likely a link somewhere in the past.

not all artists can draw well. But William Strang specialised in etching and lithography, so he had a very fine eye indeed.

I hope you ARE related to the Dumbarton Strangs. That way you could be in line to inherit some lovely works of art.

*nod* as clever as landscapes and still lifes might be, there is still something fascinating about the relationships of people in a genre scene.

Have a look at Strang's The Cafe-Bar, 1914, in the National Gallery. I would love to know what was happening in that scene.