Huguenot Symbol - how deeply encoded was it?

My passion for Huguenot art has always been in gold and silver-smithing and in silk weaving, not in jewellery. But the Huguenot Cross presents a particular intellectual challenge.

In general, most histories suggest that the first Huguenot Cross was produced in 1688 by the goldsmith Maystre of Nîmes. This was only a few years after the Revocation of the Edict of Nantes which had left all French Calvinists without citizenship and its protections. At a time when being caught out as a Protestant could lead to dragonnades, prison, forced baptism into the Catholic faith, galley ships, slavery in the West Indies or even death, it has been suggested that the cross represented the Huguenots desire to declare loyalty and fid­el­ity to the French Crown, at the same time reiterating their belief in the reformed faith. 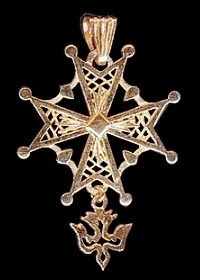 Huguenot cross, one of the many possible variations in colour, material and design

Annkroeker blog in The Huguenot Cross noted that the shape of this cross was mod­elled after the Maltese Cross. The cross was empty, further symbol­ising His victory over death. Eight points around the edges added up to represent the 8 Beatitudes. Between the arms of the cross, the fancier pendants had the image of a flower of French or­igins, the fleur-de-lys which represented the Trinity. There were four fleur-de-lys, one for each of the gospels. The inner ring formed by the string of fleur-de-lys represented Jesus’ mocking crown of thorns. And of course the dove symbolised the Holy Spirit.

Beautiful Feet blog in The Huguenot Cross told a very specific tale about a group of Huguenots that had gathered for a secret wedding ceremony, somewhere in the Cevennes. The preacher was busy marrying four young couples when the dreaded French Dragoons appeared on the scene. Many of them escaped, but two of the bridal couples were caught. Of course they were given a choice: become Roman Catholic or die at the stake. They refused to recant their Huguenot beliefs and true to their faith, they were burnt at the stake on their wedding day. A metal worker from Nimes saw it all, and made a small medallion. His nucleus resem­bled the Maltese Cross, the symbol of the Crusaders, while the four arms of the cross were linked with a smaller circle which refers to the flames that united them.
*
These analyses of the design sources for the Huguenot Cross may well be correct. But its very existence back in 1688 was hugely problem­atic. To have a secret symbol that would allow Huguenots to identify like-minded people would have been very sensible, assuming that only Huguenots could decode the symbol. As soon as the Huguenot Cross became known as a symbol of Protestant Heresy to everyone in France, that sym­bol ceased being of comfort to Huguenots. Rather it would have made them even more liable to dragonnades, prison, forced baptism into the Catholic faith, galley ships, slavery in the West Indies and death. 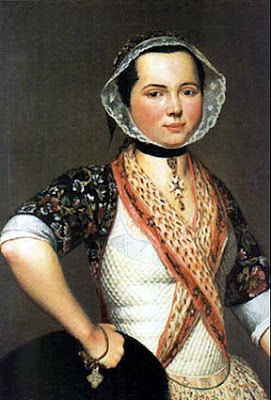 Raspal, Portrait of a Young Woman in Arles Costume, 1779*

I think The Dupreez Family blog (see HUGUENOT EXODUS) is correct. The Hug­uenot Cross became an official symbol of the French Protestant church only after the Edict of Toleration in 1787; since then, Huguenot de­s­cendants have been proud to display this piece of jewellery as a safe symbol of recognition between them. Alas for my theory, 18thC Cuisine blog displayed in Passover & Days of Unleavened Bread a beautiful 1779 painting by Raspal from Arles in Provence. The promin­ent display of the Huguenot cross on his model suggests that the Calvinists were surviving openly in Provence, before the Edict of Toleration.

Britain did pretty well out of the Huguenot's as many fled across the Channel and a high percentage of them were skilled artisans.

From: Meira de Bouter
Hi Everyone,
I have just had a large silver Hugenot cross made here in NZ and have never seen one here before. Both my families left France and then moved to Holland. At least one of the families was Protestant. There's a good movie about the French royal family and the Hugenots its called "Queen Margot."

I'm an American with Huguenot ancestry. I am interested in reading more history and also even more interested in Huguenot symbols/jewelry/knotwork, and art. Can you direct me?