At the behest of another famous engineer Isambard Kingdom Brunel, Joseph Bazalgette was appointed chief engineer of the Metropolitan Commission of Sewers in 1856. The pumping station was built by Bazalgette as part of Victorian London's urgently needed main sewerage system. Very urgent! The smell of this huge city must have been intolerable, not to mention the ongoing risk of deadly disease. The River Thames was so heavily polluted with raw sewage before Crossness Pumping Station was built that members of parliament thought of abandoning the recently opened Palace of Westminster.

The new network took sewage to the edge of London (Greenwich) where it could be stor­ed in huge underground reservoirs before being pumped out into the Thames at high tide. Then it could flow out to sea without polluting the city's drinking supply. When Crossness was official­ly opened by the Prince of Wales in April 1865, he said that the importance of this sanitation process to the long-term health of South London was vital.

My interest in Crossness is not as an outstanding example of Vict­orian engineering, although that was impressive. Sir Joseph commis­sioned the well-known engineer James Watt to create and build the steam engines that would be needed to power the pumps. The giant rotary beam engines and pumps did the job heroically and although there were major modifications after 1856, Bazalgette’s vision carried Crossness through till 1956.

My interest is in the architecture, an absolute surprise and delight in an extremely utilitarian project like sewage. From the outside, the design included rather ornate brick work, Romanesque window arches and door columns. 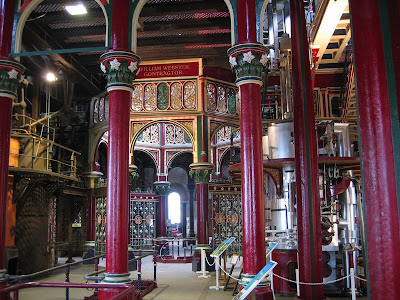 One of the engines

But the interior.. oh the interior! Crossness pumping station was an amazing and ex­t­rav­­agant display of Victorian painted cast ironwork. But, she said, the scale and importance of the endeavour surely justified such exuberance. I love her refer­ence to Nikolaus Pevsner who said this building was a 'cathedral to ironwork'. I also liked the fact that the four engines were named for the royal family: Victoria, Prince Consort, Prince of Wales Albert Edward and Princess of Wales Alexandra.

John Shewell in The Great Steam Cathedral loved the ornately iron fittings of course, but he was particularly taken by the mini sculptures, the steel lattice floor and the huge skylight on the roof to let in light through­out the vast interior. For him, all these elements contributed towards the feeling of being inside a Cathedral. The scale of the operation was huge: four engines stood in the four corners of the building, whilst the centre was taken up by the ut­terly gorgeous octagonal structure. The monogram of the Metrop­olitan Board of Works featured throughout, and the contractor included his own name prominently on one side. 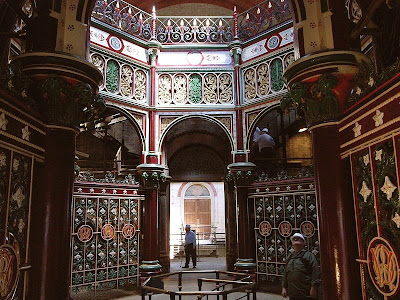 Since the general public would never see the inside of a pumping station, who was all the decorative ironwork designed for? There was plenty of internal space for the workers, plus a lovely garden for their leisure outside. But I don’t think Crossness was designed for the workers’ pleasure. Crossness Pumping Station was a pioneering and palatial piece of Victorian architecture: Joseph Bazalgette designed it palatially because he could.

Joseph Bazalgette must have been loving his work.The original Abbey Mills Pumping Station in East London E15 was also designed by Bazalgette and architect Charles Driver, soon after Crossness was up and running (1865-8). Not dissimilar to Crossness, Abbey Mills was built in an even more ambitious Byzantine style, complete with a slate mansard roof and central dome. The round headed windows had polychrome decoration while the larger central window to the upper storey was divided by cast ironwork. This Victorian wonder was so cathedral-like, the chimney resembled a campanile. 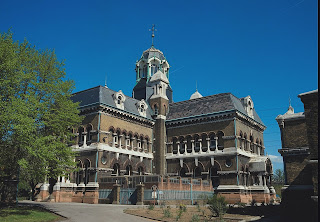 Tired of London blog has added a useful post on Markfield Beam Engine and Museum in Tottenham. Victorian / Edwardian Paintings has added a post on one of Brunel’s engineering triumphs, The Thames Tunnel. Opened in 1852, a few years before Crossness, the tunnel was also a perfectly functional bit of city infrastructure that took on a huge significance for Victorians. Apparently there was nothing scientific, architectural, engineering and beautiful that they could not design and build. Unmitigated England has written about the Abbey Pumping Station in Leicester. Once used for pumping sewage up to Beaumont Leys in Leicester, the incredible Gimson steam engines still look very impressive in a Victorian Valhalla of decorated iron pillars.

I have often wondered why the insides of these buildings, which had only to be purely functional, had such elaborate interiors. Something that would definitely not happen today.

I think one of the reasons that London actually got round to giving itself a fully functioning sewage system is that MPs wanted something done to protect their own nostrils, not neccessarily for the betterment on the London population as a whole.

John
Apart from the sewage pumping stations, were there other purely functional buildings with very elaborate interiors? I would love to have a look at them.

I very much enjoy reading your blog. I have just launched a new website which I think your readers may be interested in. The site provides audio commentary on lots of London's top landmarks and is free - visitors use a map of London to pick sites and listen to tips, interesting facts and history. If you would like to check it out the site is at www.ComeAwayWithMe.co.uk/LondonAudioGuide

I think most of the functional buildings you can think of, that were in use in the later nineteenth century, probably had interiors like this.

Where I come from, Cornwall, there is a wealth of nineteenth century mine workings. Many of the engine houses, sorting and stamping works, are in a Romanesque architectural style.

There is no practical reason why they should have been built in a revival style, but they look a lot more attractive as ruins than if they had been built as purely functional industrial complexes.

Daniel,
that site looks very useful, many thanks.


I have added a link to Abbey Pumping Station in Leicester, built in 1891. It too is stunning to look at.

daniel
the problem is always finding these pieces of interesting architecture. I have been in Britain every second summer for decades, yet I would not have known about Crossness (except accidentally).

You might like to inspect a water colour drawing by William Cheeseman of "The Old Pumping Station of the Exeter Water Company near St David's Station, Exeter" 1876.

Very cool!
Thank you for sharing at http://image-in-ing.blogspot.com/2016/04/the-many-faces-of-louie.html

The Rozelle Pumping Station in Sydney was perfectly fit for the job. But when we examine Crossness etc, we have to ask why did they spend all that money and energy in making the architecture and equipment look so splendid. I agree with John hopper - it wouldn't be done now.