As the shallower gold deposits ran out in Ballarat, deep-lead mining ventures started up. Of course these projects demanded larger capital investment by companies, rather than hopeful individual miners armed with an axe and screen. Some 300 mining companies were working the Ballarat goldfields in the late 1860s and by 1868 the population on the goldfields reached 64,000. 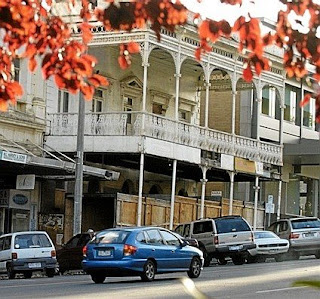 For many years, during and after the hysteria of the Gold Rush, share brokers in Ballarat's mining companies conducted their trading outside the Unicorn Hotel in Sturt St. The Unicorn, started 1856, had provided the dealers and their customers with shade, seating and a ready supply of alcohol. But the increase in trading meant that this system was not going to last for very long. And for people who know Ballarat, the climate condit­ions were difficult: very hot and bone dry in summer, cold and wet in winter.
So they purpose-built the Ballar­at Mining Exchange in Lydiard St. Designed by CD Figgis and built by W Robert­son, the site chosen was in Bank Row where much of the City's commer­c­ial activity has been conducted. As it happened, the Mining Exchange was built on the very site where troopers gath­ered in 1854, before setting off to quell a revolt by miners at the Eureka Stockade. Much to the disgust of most workers in central Victoria.
* 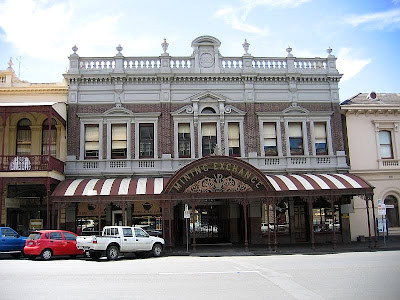 Ballarat Mining Exchange, 1888
Opened in 1888, the grand hall of Ballarat's Mining Exchange was lined with forty separate “offices” in which share-brokers and mining agents sold shares in goldmines. The Ballarat Mining Exchange quickly became the wealthiest stock ex­change in Australia.
*
The Exchange closed down in 1914 since there were no able bodied young men left in or near Ballarat. And with the miners off fighting in Europe, Ballarat's last gold mine finally closed operations in 1918. Art Monte-Carlo blog reported an amazing bit of art history connected to this building, in The Bush at the Ancient Gold Fields of Creswick, Australia. Artist Matthew Moss found the abandoned gold exchange soon after he arrived in Australia. Happily it still retain­ed many of its beautiful original Victorian features eg its superb original glass and carved timber vaulted roof. So the artist decided to restore it to its original state and for many years used it as his studio and where it became the centre for conservation for the many art museums in the state. 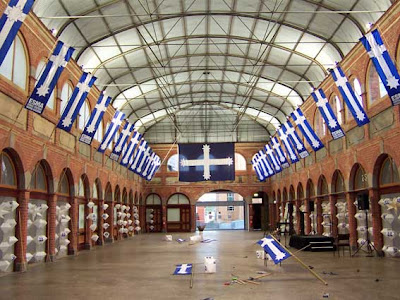 
So the entire building was renovated according to the original plans. And the beautifully ornate veranda was reconstructed from photographs and replaced in 1987. Today the old Mining Exchange is used for inform­ation, display and research. For example Explore, Discover, Connect blog showed how the Central Highlands Regional Library brought a variety of the treasures of the Australiana Research Room to this beautiful building. Cocktail Rings and Vintage Things blog discussed a vintage clothing exhibition.
Posted by Hels at 24.5.09

The Unicorn Hotel might have been historically important but it looks neglected now.

Thanks for the mention, I just came aross your blog.
It's very sweet. All the best.

Have just read your description of the Ballarat Mining Exchange. I was told by a deceased aunt that my great-grandfather, Augustus Sheppard, was a founding member of the mining exchange, and that his name is engraved above the No.1 office inside the building. I can’t find any mention of his name, or that of a Martin Loughlin, also supposed to be one of these members, who was my late husband’s greatgrandfather. I am wondering if there is a list of their names somewhere.

Hels said...
Wouldn't it be terrific to have an ancestor who was well known in his city. I found your great grand-father's name in The History of Ballarat from the First Pastoral Settlement to the Present Time, written by WB Withers in 1887. So he was indeed a notable.

I didn't see any plaques in the Ballarat Mining Exchange, but then I wasn't really looking for them. Why not call the Ballarat Visitor Information Centre, 39 Sturt St (1800 648 450) and ask them to put you in contact with the Mining Exchange's historians and curators.

Mott and meglet,
what splendid architecture our old gold rush towns had. And how fortunate we are that most of it was not pulled down. Hopefully the neglected buildings will be preserved and improved.

If you still have Helen E’s email address, could you please be so kind as to pass my email address on to her so we can get in touch.

with pleasure :) Find My Family is one of my favourite programmes on tv. By the way, I think that the Ballarat Mining Exchange was a very fine building when it was first built, and still is now.

Great post you shared, you have now become top of my list. You were unknown to me before but have found your content to be fantastic.

So great work for informing us of the possibilities and following a certain path.

I really appreciate your hard work an giving us some information and inspiring others to follow.