Every Protestant artist, archaeologist and photographer worth his salt spent time in the Holy Land during the second half of the C19th. I am revisiting James Tissot because he seemed an unlikely candidate for a religious revelation and for Biblical themes in his art.

The Peddlers Donkey blog noted that Tissot’s pictures in London were virt­ual­ly an instant success with the art viewing and buy­ing public, but not with the critics and colleagues in France where he was regarded as a very minor figure. The critical hos­tility Tissot’s pictures met was strange. The main criticisms were that the pictures were really only painted photographs, and they were vul­gar. The pictures clearly showed shallow nouveau-riche English soc­iety at its worst which may, or may not have been Tissot’s intention. 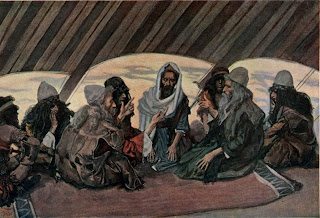 When the love of Tissot’s life died, he sold up and returned to France, devoting the rest of his life to religious paintings. He visited the Middle-East twice (in 1886-7 and in 1889) , to absorb himself in a religious landscape. As he aged, Peddlers Donkey asserted, Tissot became increasingly interested in Spiritualism. 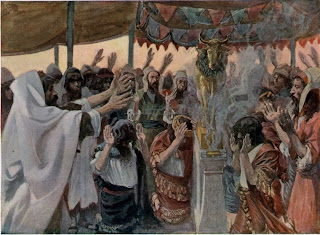 Bearded Roman blog tackled Tissot’s religious interests in a post on The Prodigal Son in Modern Life Series. Mr Roman wrote that during the 1880s Tissot had a religious awakening and produced a number of works inspired by the Bible. In 1885, he had an epiphany that led him on a pilgrimage to cathedrals in France and to create a series of 35 scenes from the life of Christ. Three versions of the Prodigal Son story remained in his studio until his death in 1902 and were then offered to the Louvre, which would not take them. Instead, the three paintings were taken by Musée de Nantes, located in Tissot’s hometown, where they remain today. 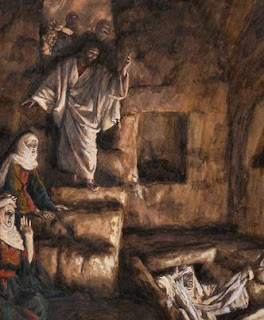 Tissot, The Raising of Lazarus


I have cited Cris, Artist in Oregon before on James Tissot; he suggested that Tissot loved to paint beautiful clothes, espec­ially woman's dresses, elaborately frilled and fresh. Tissot’s parents ran a clothing business in his youth and he was a well dressed young man himself. Tissot used models and kept costumes and props to dress up the models for his paintings; he used the models and clothes often. Scholars and Rogues agreed, stating that every nuance in clothing, every frill and tuck, every trend was touched and built by human hands and human imagin­ation. That Tissot liked to paint gorgeous young things in London may not surprise us. That his Biblical characters were richly kitted out might be something we may not have expected, especially in males.

The culmination of Tissot's 10-year long mission was the French and English publications of "The Life of Christ", according to the Georgina Kelman blog. It was an immediate success and Tissot's 350 original watercolours were presented to huge acclaim at the Paris Salon of 1894 and later in a trans-Atlantic travelling exhibition including London, New York, Boston, Philadelphia and Chicago. In 1900, at the urging of John Singer Sargent, the brand new Brooklyn Institute of Arts and Sciences (now the Brooklyn Museum) decided to purchase the complete series of watercolours. They remained on display until 1930. Look at her blog for Tissot's The Annunciation,
* 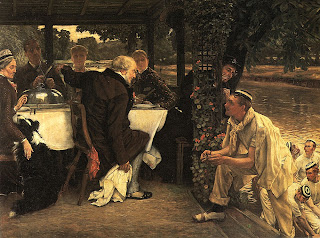 
I suppose if the Jewish Museum in New York had not pulled all of Tissot’s Biblical images together in its 1982 exhibition, I would have assumed his religious themes consisted of quickly created, late C19th water colours and drawings. Instead they were rich and intense, not as polished as his secular images to be sure, but still interesting.
*
We can compare Tissot's Biblical images to William Holman Hunt’s ...or Horace Vernet’s. For the last 17 years of his life, Tissot observed and depicted local landscape in detail, put effort into the religious clothing, displayed an interesting view on Biblical stories and painted splendid, young men and women.
Posted by Hels at 27.5.09

Someone els you may like to consider in the context of painters and the holy land, is Edward Lear,mainly known for his nonsense poems he was nonetheless a prolific watercolorists and traveler, making it as far as India and Ceylon. a interesting post as always!

I haven't seen many of Tissot's paintings but I noticed his focus on clothes. I didn't realise that he liked to show the wealthy at their worst! Thank you for a very interesting post.

I can see why you would say that, Viola. "The main criticisms were that the pictures were really only painted photographs, and they were vul­gar. The pictures clearly showed shallow nouveau-riche English soc­iety at its worst which may, or may not have been Tissot’s intention."

But as far as people can tell, Tissot loved young women, loved attractive clothes and had a good life in London, himself. He was not satirical, like Hogarth for instance. He must have felt horrible when the critics savaged his work, especially Ruskin.

Now I have to find out what a modern historian means by Tissot's "troubling discord between surface and depth".