James Beight, a Washington architect, suggested that "No other build­ing type communicates as much about our society as does the courthouse." Courthouses, he argued, are a little like medieval cathed­rals: they express the will and the hopes of the people. Perhaps he was correct, at least in the C19th. Concurring Opinions » Old Courthouse Architecture was posted by Daniel Solove. He noted that Amer­ic­an courthouses “used to be built as solemn, neo-classical style structures”. Most of his respondents seemed to prefer the traditional and the solemn.

I wasn't sure if C19th rural Victoria required neo-classical courthouses necessarily, but I did think that towns would go for gravitas. Gold was discovered in country Victoria in 1852 and the immediate influx of miners to the region resulted in sudden population surges. A gold town needed three facilities (apart from pubs) to be built as soon as the population grew: a courthouse, a police force and banks. Life was a bit rough and ready in rural Victoria in the 1850s and 60s, so courts and police stations needed to be solid, elegant and displaying the gravitas of colonial government. Although small, the courthouses had to frighten potential criminals into moral behaviour. So did the police station and the holding cells, next door. 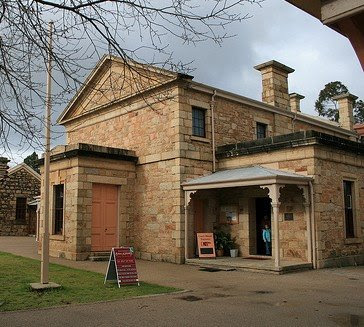 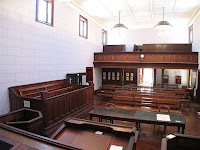 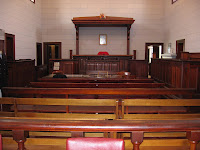 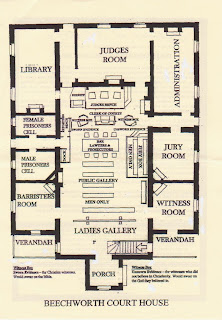 The architectural information came from Victorian Heritage Database - COURT HOUSE. I imagine that except for the larger rural cities, some of these courthouses were only used one day a month, when the judge arrived on his circuit. Cases presumably ranged from petty crime (eg public drunkedness) to bush-ranging and bank robberies.

In Creswick, the courthouse was one of the largest courthouses built during this era. The upper part housed a gallery, the smaller side wings housed off­ices and judges chambers. Built of blue stone in 1859, this small squat building has 6 tiny barred win­d­ows and heavy steel door. The Old Lock Up built next door was needed as soon as the court house was built. The Old Pol­ice Stat­ion 1861, next to the court, came slightly later. It provided the police station and police accom­mod­ation, in one complex. The Old Gold Bank was built in 1860, with a second storey finished 1864.

Beechworth became the central town of the Ovens River goldfields and the administrative centre for NE Victoria. In 1856-60, the government demolished many timber buildings from the early gold rush days, making way for the more sub­st­antial granite structures. Of course a gaol was an early neces­sity 1853 and very soon after the law courts 1857, a hos­p­ital 1856, hospital for the aged, a mental asylum and a flour mill 1855. The courthouse 1857-9 was built of granite and feat­ured a cent­ral block with gab­led ends containing the main courtroom, flanked by office wings. There were ver­andas outside and a public vestibule inside. 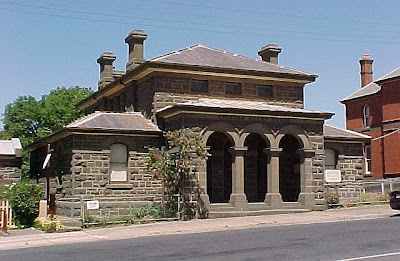 
The first court building in Castlemaine was built in 1858. This classical court-house was similar to the courthouse at Beechworth, with a small front porch, a single side cell wing on the east side, and stucco mouldings. A smaller police court stood to the west at the same time. The courthouse was designed by John Marsden of the Public Works Dept. William Wardell’s modifications were completed in 1878-9, to provide services for the Supreme Court and County Court, including facilities for juries, which were now required in the larg­er regional centres such as Castlemaine. War­dell was asked to be frugal, "the sim­pler the better, so long as proper architect­ural effect is pres­erved". The painted stuccoed brick building had clerestory windows which lit the court room. Plain cornice mouldings adorned the front porch and the front gable of the court room featured a triangular Roman pediment. Inside, courtroom was austere, with plain walls and ceiling, and furnished in light coloured timber. There were also offices, a holding cell block and judges chambers.

Many of Kilmore's oldest extant buildings were made of bluestone ihe 1860s, including the hospital, old court house, former post office, some churches and the gaol. Police court sittings commenced in Kilmore first and soon county court and general sessions began. The courthouse 1863 was designed by J J Clark under the sup­er­vision of William Wardell of the Public Works Dept (two of Victoria’s most famous architectural names). The basalt building consisted of a double height courtroom with a hipped slate roof that was flanked by lower wings and entered through an arcade porch. Two basalt columns and two pilasters carried the three arches of the porch. Three pairs of double doors opened from the Italian Renaissance porch.

The court house in Yackandandah 1864 was built as both a mining and magistrate’s court. By the time Yackan­d­andah was surveyed in 1856, it had already established itself as a significant settlement, alongside nearby Beech­worth. Designed by Gustav Joachimi of the Public Works Dept in a conservative classical style, the single storey brick courthouse and corrugated iron roof had a simple gable courtroom with three main rooms in the rear and an arched brick porch at the front. Distinctive local bricks were used to produce detailing to the main roof gable and around the entrance arches. Yackandandah’s buildings like the ch­urches, classic revival court-house 1864, Public Hall and Athenaeum 1878 were nice, but they always remained small. 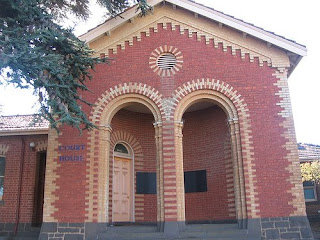 Ararat was declared a municipality in 1858. Work on a hospital, water supply, cem­etery, botanical gar­dens, mechanics institute, church and courthouse began in 1859. Ararat's courthouse was constructed in 1867, built on the site of a smaller court building. The 1867 ver­s­ion was built in the Romanesque style with decorative red brick work.


Stawell’s old courthouse was built in 1860, later used as police bar­racks. When the population centre shifted to Big Hill area, an elegant new courthouse 1880 was opened, from local granite and freestone. Next to the courthouse was Police Precinct, with a 2-cell lock-up that was built at the same time as the courthouse. The rest of the land was occupied by the 4-stalls of the police stables and the fine resid­ence of the Wimmera police superintendent. 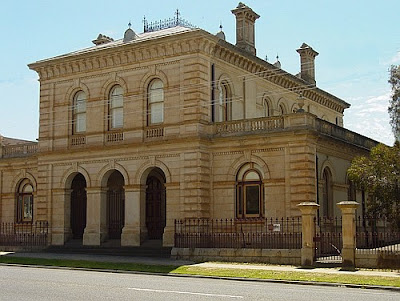 
The old sandstone Court House 1853 in Buninyong was abandoned when a combined town hall and court house was built in 1886-8. The building was designed in the Italianate style and featured arch-headed windows, projecting cornices, balustrading, pediments and parapet urns. Note the central slate roofed tower with and dormer ventilators. Even though the gold had run out by 1880, they still created a grand building on a rectang­ular plan with a central town hall flanked by the courthouse, magistrates' room and clerk of petty sessions offices to one side, and by the town clerk's office, council chambers and mayor's office to the other. 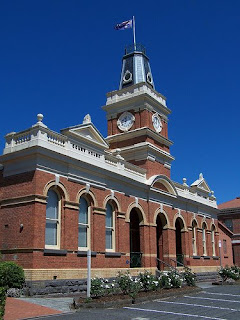 Buninyong, courthouse to the left, town hall to the right


It would be interesting to know if towns with a gold-rush history were more concerned about law and order than other towns.

Great article - thanks for posting!