When Melbourne's Shrine of Remembrance was dedicated on the 11th Nov 1934, there was a commitment to the crowds that the shrine would always have an unimpeded and uninterrupted view from the city, and that the view would never be marred by buildings along St Kilda Road.

Local overlays have long existed to protect the Shrine’s vistas and the building from the shadows of St Kilda Road buildings, and build­ings along the boulevard are indeed lower than a 60m height limit set for the area. Despite this, an exemption was made for the 154m Royal Domain Tower.

75 years after the Shrine opened, Melbourne Heritage Watch blog has again expressed concerns about these spectacular, unimpeded views in Planning shadow looms over Shrine of Remembrance. 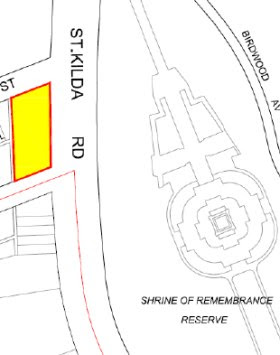 butterpaper's view of the shrine and its potential neighbour
This time the interference would be worse. The proposed 117m tower at 324 St Kilda Road Southbank is much closer to the Shrine; in fact directly opposite as butterpaper blog shows in Architecture via Butterpaper: news: australia. A tower development threatens to overshadow and cast significant glare on the historic building.
Although the plan­ning minister’s office is investigating, a terrible precedent is already in place. Melbourne Heritage Watch wonders whether the current state government will decide whether Melbourne’s long held values are worth preserv­ing, or not. A decision in favour of the full height of the new tower may well detract from Melbourne’s heritage. 60 ms seems tall enough.
Posted by Hels at 2.6.09