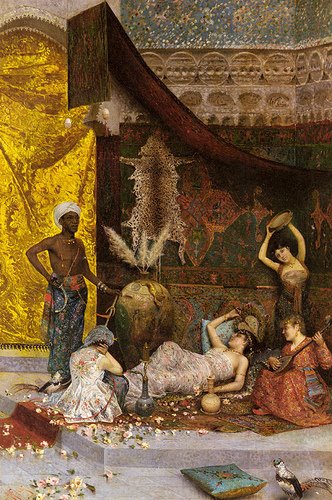 Fabbi,
Musical Interlude in the Harem

In 1453 Sultan Mehmet the Conqueror and the Ottomans captured their most important political and financial goal, Constantinople. Topkapi Palace was the first built palace in Islamic Con­stantinople, while the harem remained in the Old Palace building for 70 years. That meant that for 70 years the Sultans had to divide their life into parts. Family life was run at the Old Palace while admin­istration of government and affairs of state were conducted in the New Palace.


The word haraam means the thing or person that is forbidden (in Ar­abic). But the harem included all the important facilities needed by the Sultan and his family. The Sultan lived there, as did the next most import­ant person in his empire, his mother. All the wives and their child­ren had apartments, while the Favourites, unmarried concubines (slav­es) and staff had smaller rooms. In addition there were shared rooms, like the lounges, court yards, kitchens, prayer rooms, music rooms, libraries and most certainly a Turkish bath. Other than the Sultan’s sons, the other males inside the harem were eunuchs. But even the eunuchs could not enter the central core of the harem.

It is impossible to know the size and complexity of the harem build­ings since individual sultans had rooms added or pulled down at will. However the harem at Topkapi probably had 70 rooms and courtyards, on top of the bedrooms given to wives, Favourites and concubines. 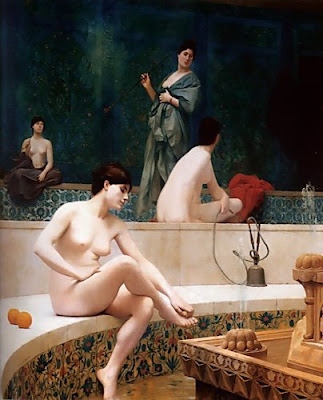 
K. Erhan Bozkurt wrote in Life in The Harem that the harem required a continuous supply of fit young women, largely bought in the slave markets of the Middle East. Their tasks included participating in celebrations, both religious and for entertainment. Musical evenings were often organised within the harem where the sultan would attend with his wives, favourites and all their children. Trips were org­anised on the upper shores of the Golden Horn. Dancing was arranged for weddings and circumcision ceremonies. But what happened to the harem women who were surplus to requirements? The Sultan could, and did make high-ranking officers marry girls in his harem. Statesmen of the very highest rank would be made to marry Sultana i.e the Sultan’s daughters or sisters.

As The Orientalist Gallery and Mark Vallen's ART FOR A CHANGE  have beautifully shown, the paintings that we see of harems tend to be from French, German, English or Italian artists, painted in the second half of the 19th century. Presumably that is because Islamic artists knew better than to paint forbidden images. Even if there were such paintings in Islamic collections, I am unlikely ever to see them. But that creates a problem. Travelling artists coming back to Western Europe from Constantinople or Cairo wouldn’t have known what the inside of a harem looked like: they simply wanted exot­ic, colourful reminders of their trip. Exotic and lush they were!

Eugene Delacroix man­aged to sketch some women secretly in Algiers, as in the large painting Algerian Women in their Qu­art­ers 1834. Shrouded in dark­ness, three seductive Orientals lounged on the ground, evoking a harem and also the sense of mystery which so glam­orised the Orient to European eyes. Note the favourite props that reapp­eared often, such as the colourful clothes, exquisitely embroid­ered green silk fabric and ornate faience tiles. 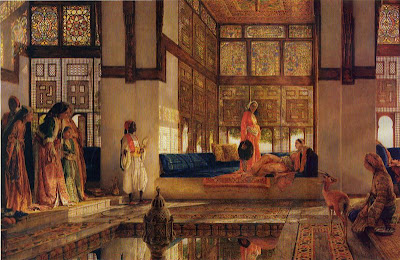 Ingres did NOT ever travel to the East himself, but some of his most famous nudes are located in the harems of Egypt and Turkey. Odalisque with Slave 1839 showed a musician on one side and a worker in the back­gr­ound. But this was an exotic, sensuous nude; she was supple, fleshy, pale col­our­ed and full of ripe languor. The textiles, archi­t­ecture and costumes were absolutely crowded with decorative de­tail, but the nude dom­inated the picture with her pale, heav­ing body and her blond tress­es. These are the images that influence our idea of a harem most.

I recently came accross your blog and have been reading along. I thought I would leave my first comment. I dont know what to say except that I have enjoyed reading. Nice blog. I will keep visiting this blog very often.

very informative work, and interesting to read too. however, i do wish to clarify one misinterpretation: the word 'harem' implies a place where the sultans lived indeed, but it does not mean something 'forbidden', the arabic word for forbidden is 'haraam' - not to be confused with 'harem'. thank you.

thank you aurangzeb... I will make a note of that straight away.

Wonderful post! Aurangzeb, made a great point of the meaning of the word 'haraam'. That's totally correct!

By the way your post had to be approved first, that's why it wasn't showing up right away.

Thanks for the mention of my blog as well, you are the best!