The Temple Mount has a recorded history of c4,000 years. It is first mentioned when the Patriarch Abraham met the king and where Isaac was to be sacr­ificed to God. King David capt­ured it from the Jeb­usites, prom­is­ing to erect a sanct­uary to God there. But this didn't happen until Dav­id's son, King Sol­omon, built a wondrous Tem­p­le on the Mount in 955 BCE. It was destroyed by the Babylonians in 586 BCE, and later the same site was chosen by Ezra and Nechemiah, when they build the second Temple.

So why did Jerusalem assume an importance to the Muslims that was third only to Mecca and Medina?

Im­por­t­antly for Islam, the Koran itself (17th surah) tells of Moham­med's famous dream in which he took a night jour­ney on the winged horse El Buraq along with the Angel Gab­r­i­el. The night journey went from "the sacred temple to the temple that is more remote"; that is, from Mec­ca to the Temple Mount in Jerusalem. Here Mohammed wor­shipped with his predec­es­sors including Abraham, Mo­s­es and Jesus. They escort­­ed him up a lad­der of light to the presence of God where he re­ceiv­ed rev­el­at­ion, then descended again. The Rock on the Temple Mount refers to the rock from which Mo­ham­med is reputed to have ascended to heav­en. 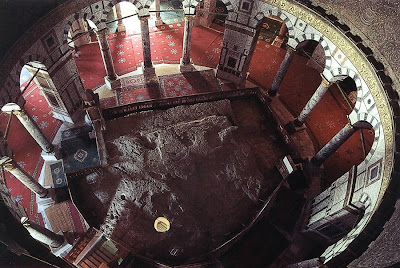 The rock, surrounded by a walkway for pilgrims

But by the time Caliph Omar visited the city to inspect his troops’ victory in 638 AD, the site of King Solomon's temple mount had been des­o­late for 700 years. Omar was offend-ed. He dec­id­ed to res­t­ore the Tem­ple Mount and er­ect a lav­ish Moslem edifice, now called the Dome of the Rock/ Mosque of Omar. But it took some time to get the project going; it was not started until Cal­iph Abd el-Malik arrived from Mecca in 661 AD and was completed within 30 years.

Designed by Byzantine architects engaged by the Caliph, the Dome of the Rock was the greatest monumental building in early Isl­amic history. Yet the blog From Lebanon to Jordan in Anal­ysing art and the Dome of the Rock suggested that religious art and architecture's main role was to reinforce memory and experience. The Dome of the Rock opposed Byzantium ideas and art, and since Christianity was coupled with the Byzantine political power, the Umayyds had to oppose it.

Thus the mosque became a visual proclamation of the New Faith in the city of Judaism and Christianity. The new building was to rival the finest sanctuaries of Mecca and Medina, and its presence was also to stimulate the local economy by becoming a focus for pilgrimage. It was certainly to surpass the best Christianity had to offer, from the basilica of the Nativity in Bethlehem to the Holy Sepulchre in Jerus­alem. They succeeded well. 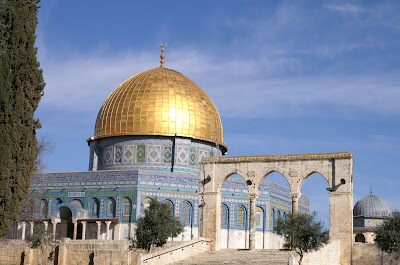 Dome of the Rock

The Dome of the Rock was a very ambitious building project. Stan­d­ing in isolation and visible from all sides, it is a unique build­ing in Is­lam­­ic culture. The aisled rotunda al­l­owed early pilgrims to walk about Mo­hammed's rock under a dome and col­on­nade. The Dome of the Rock therefore is bas­ed more on the Church of the Holy Sepul­chre built by Con­stan­tine in 335 AD, and less on Moham­med's centre in Medina. Perhaps it was built by the Caliph Abd-al-Malik specifically to rival that memorable church.

The octagonal building has an inner drum of sixteen piers and col­umns, and an outer arcade of 24 piers and columns. Four of the eight sides have doors set in them and in the other four there are windows. All this suppor­ts a wooden dome of 60’ diameter. The dome has no lit­urgical sig­nific­an­ce, but it is the cr­ow­n­ing glory of the build­ing. It is the cosmic heaven, and a per­­­fect surface for gold. It was initial­ly covered in gold leaf but that was all stolen, revealing the lead be­neath. Now it is covered in a gleaming bronze alloy.

There may have always been tiles on the exterior walls of the building, but the stunning beauty we see today didn't arrive until 1545. The outer side walls were covered with blue and green Iznik tiles, around the many windows. The interior of the dome was decorated with mosaic, faience and marble, all commissioned by Suleiman the Magnificent. As expected, the decorative elements consisted entirely of flora, geometry or Koranic inscriptions. 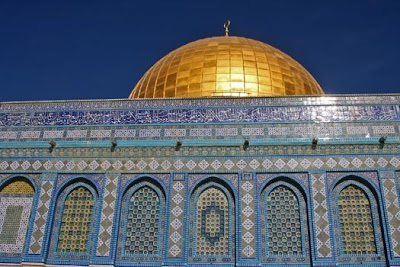 All this decoration seems surprising. Most Islamic architect­ure puts value only on what’s inside the buil­d­­ing, so that the out­side of a building is irrelevant and often hid­den; a Muslim building may well be concealed by being total­ly sur­r­ounded by adjacent buildings. Enclosed space is the most imp­or­tant ele­m­ent of Islamic arch­itecture; decoration is normally res­er­ved for the ar­t­iculation and embel­l­ishment of the inter­ior. If there is to be any minimal decor­at­ion on the outside of a building, it is usually limited to the domes or gates.

But if Islamic arch­it­ect­ure is normally hid­den architect­ure, the Dome of the Rock has pro­vided a notable except­ion, standing in its isol­at­ed glory on the top of Jerusalem. In fact it is not of pure Islamic ar­chit­ec­ture nor is it a mosque - the Dome of the Rock was built as a comm­em­orative site for Muslim pilgrims. Thus if worshippers want to face Mecca and pros­trate themselves, they can do so out­side, or in Al Aqsa Mosque next door. On Ramadan, this could mean tens of thousands praying in the open spaces.

The Spiritual Archive blog cited the British authority on Muslim architecture, KAC Creswell, who wrote in the 1920s: “..the size of every part is related to every other part in some definite proportion; the building instead of being a collection of odd notes becomes a harmonious chord in stones. Some of the ratios involved are fundamental in time and space, they go right down to the very basis of our nature, and of the physical universe in which we live and move.” I agree.